Home » Politics » Brexit LIVE: No deal in SEVEN DAYS unless EU gives in to fishing ultimatum – ‘Time’s up!’

Brexit LIVE: No deal in SEVEN DAYS unless EU gives in to fishing ultimatum – ‘Time’s up!’

A no deal seems increasingly likely with the EU failing to budge over the UK’s fishing ultimatum as torturous talks come down to the wire. Talks between the UK and EU have been taking place in London this week, but they are not expected to bear fruit despite progress needing to be made if a new deal is to be in place when the current arrangements expire.

The Brussels bloc wanted a deal in place by the EU Summit on November 19 in order for it to be ratified by the time the transition arrangements expire at the end of the year and the UK leaves the customs union and single market.

But stumbling blocks remain over issues including “level playing field” measures aimed at preventing unfair competition on issues including state subsidies, the ongoing row over fishing rights and how any UK-EU deal will be governed.

The UK has warned the EU it needs to show “realism” over fishing rights post Brexit. 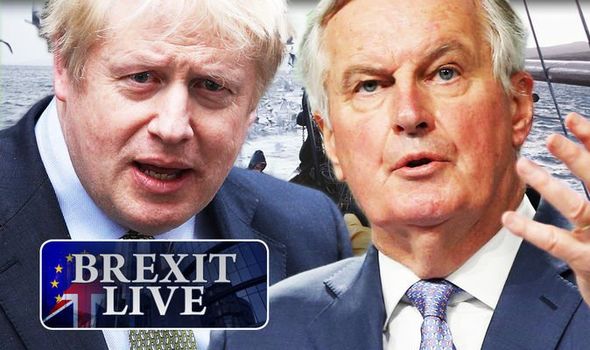 Prime Minister Boris Johnson has previously warned he is prepared to unshackle the bloc without a deal – meaning trade between the UK and EU will be subject to tariffs set out by the World Trade Organisation.

An EU source told the Guardian: “If there isn’t good news by then, then you really have to say that time is up – it just isn’t possible.

“The leaders will need to see that it is there.”