With less than six weeks until Election Day, laws governing how Americans vote remain in flux in many battleground states, with the two parties locked in an intensive fight over the rules as President Trump continues to suggest he will challenge any outcome unfavorable to him.

The combination of the pandemic, doubts about the capacity of the Postal Service to handle a flood of mail ballots and an aggressive push by Democrats to expand access to voting rights and counter Republican efforts to limit them has fueled litigation and legislative battles across the country that have not been resolved even as early voting has gotten underway.

The result is uncertainty that Mr. Trump is already seizing on in his extraordinary campaign to cast doubt on the election system and the result. In the latest of a string of remarks on the issue, the president refused on Wednesday to commit to a peaceful transfer of power, igniting new concern about his commitment to the Constitution and drawing pushback on Thursday from prominent members of his party.

After the White House then said that Mr. Trump would accept the results of a “free and fair” election, the president weighed in again, saying that he was not sure the November election could be “honest” because mail-in ballots were “a whole big scam.”

Even before his comments over the past several days, the confusion surrounding how ballots should be cast and counted had reached a level rarely before seen.

In Wisconsin and Pennsylvania, two states pivotal to the outcome of the presidential race between Mr. Trump and Joseph R. Biden Jr., the Democratic nominee, there are legal fights underway that could affect when voters have to mail in their ballots. In Pennsylvania and Ohio, there are lawsuits about where voters might be able to drop off their ballots.

In those states and others, the very means by which the election will be conducted is still being hashed out through legislation, executive actions and consent decrees, as well as litigation.

In Michigan, legislation is pending concerning whether voters will have the ability to fix any problems with their mail-in ballots. In North Carolina, elections officials signed an agreement to extend the deadline for receiving mail ballots by six days, and Republicans immediately pledged to try to overturn it.

The problem has been exacerbated by the options that states have sought to provide to make voting safer and easier amid the pandemic, changes that have often been met with a flood of lawsuits.

“A whole bunch of Americans are going to have a different process than they may be used to,” said Justin Levitt, a professor at Loyola Law School who oversaw voting rights in the Obama administration as a deputy assistant attorney general. Mr. Levitt has been tracking pandemic-related election law cases across the country, and he said that “any change is inevitably going to lead to disruption.”

No state is more acutely aware of the potential for litigation-caused electoral chaos than Wisconsin. There, state elections and a presidential primary were held in early April during the first serious peak of the coronavirus, and were conducted amid a surge of lawsuits and rules changes that left voters confused. Many felt forced to brave hourslong lines at the few in-person voting centers in cities like Milwaukee and Green Bay to assure that their ballot would count. 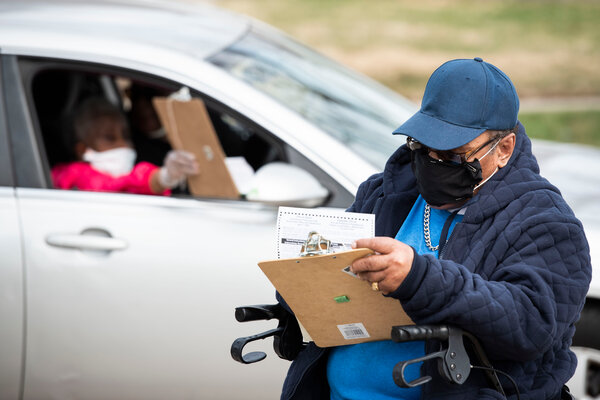 Now, Wisconsin voters are staring down an almost identical situation. The same federal judge who was in the middle of one of the main cases litigated in the spring, William M. Conley, sided with Democrats in a ruling this week that ballots postmarked by Election Day could be counted if they were received as late as Nov. 9, six days later. But the judge ruled against Democrats in upholding a requirement that absentee voters have a signature from a witness.

Judge Conley issued a weeklong stay in his ruling, and Republicans filed notices of appeal on Wednesday, seeking to keep any ballots received after Election Day from being counted.

The uncertainty has forced the Wisconsin Elections Commission to plan for multiple regulations even as it sends out 2.7 million pieces of mail to voters with election information.

The legal maneuvering has proved difficult for some Wisconsin voters to track.

“I try to follow, but it’s hard to keep up,” said Paula Bullis, 50, from Washington, Wis., who has already mailed in her ballot but remains concerned about what will happen in November.

“I’m worried about the worst,” she said, “but I’m hopeful that the process and constitutional laws and the powers that be make it run smoothly.”

In Pennsylvania, Democrats and Republicans fought to a standstill in the General Assembly over elements of the rules for mail voting. The Republicans, who control both houses of the legislature, wanted to ban the use of drop boxes for completed ballots, in return for allowing election officials to begin processing absentee ballots before Election Day. (Democrats wanted to start 21 days before Election Day, and Republicans countered with three.)

But Republicans also knew Gov. Tom Wolf, a Democrat, would veto any bill they passed without Democratic support. And Democrats turned to the courts.

“We have a parallel path,” said Jay Costa, the Democratic leader in the Pennsylvania State Senate. “We have a series of court cases.”

This week, the Democrats notched a significant victory in the State Supreme Court, which extended the deadline for when ballots must be received by election officials and paved the way for more drop boxes to be installed.