President Trump’s defeat in his border-wall standoff with Congress has clouded his already perilous path to a second term in 2020, undercutting Mr. Trump’s cherished image as a forceful leader and deft negotiator, and emboldening alike his Democratic challengers and Republican dissenters who hope to block his re-election.

The longest government shutdown in history inflicted severe political damage on the president, dragging down his poll numbers even among Republicans and stirring concern among party leaders about his ability to navigate the next two years of divided government. Mr. Trump, close associates acknowledge, appears without a plan for mounting a strong campaign in 2020, or for persuading the majority of Americans who view him negatively to give him another chance.

Compounding the harm to Mr. Trump on Friday was the indictment of Roger Stone, his political adviser for several decades, on charges of lying to investigators and obstructing the inquiry by the special counsel, Robert S. Mueller III, into Russian interference in the 2016 election. The indictment was taken by some Republicans as the surest sign yet that Mr. Mueller’s investigation is likely to grow more painful to Mr. Trump and his associates before it wraps up.

Mr. Trump still commands the loyalty of a passionate electoral base that has rallied to him in trying moments, and advisers believe he will have room to right himself while Democratic presidential candidates are mired in a long nomination fight. Yet they are also growing anxious that he could face a draining primary of his own next year.

Several prominent Trump antagonists are actively urging other Republicans to take on the president, and a popular governor, Larry Hogan of Maryland, has indicated he is newly open to their entreaties.

In a sign of the White House’s determination to project party unity, a top Trump campaign official, Bill Stepien, traveled to the Republican National Committee meeting in New Mexico this week to orchestrate an ornamental resolution of support for the president. It passed unanimously on Friday afternoon, hailing Mr. Trump for his “effective presidency” even as his shutdown strategy collapsed.

David Winston, a Republican pollster, said the burden was now on Mr. Trump to restore his stature as a leader by forging some kind of border-security deal with Democrats, and to deliver a stronger message on the economy.

“Leadership means results,” Mr. Winston said. “When you have a shutdown, people look at it, basically, as: the political system has failed.” 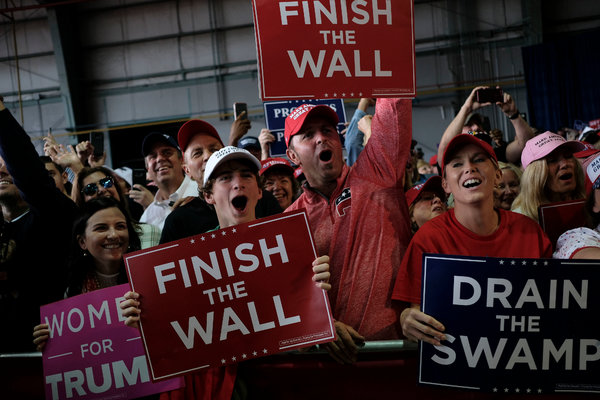 Mr. Winston said polling data suggested the border wall had been a problematic fight to pick. “Immigration is an important issue,’’ he said, “but people are waking up every day trying to figure out how they’re going to pay a set of bills in front of them.”

For now, Mr. Trump remains wholly focused on appeasing his conservative base, comprising perhaps a third of the electorate, despite private G.O.P. polling suggesting that his agenda on immigration has failed to move the country in his favor, Republicans who work closely with the president said.

But Mr. Trump emerged from the shutdown with nothing to show for it, having angered swing voters with his intransigence, while disappointing hard-line supporters by failing to secure any funding for a border wall.

[Read about President Trump’s retreat on the shutdown.]

Conservatives still believe that Mr. Trump cannot afford to abandon his crusade for a barrier. Not long before Mr. Trump agreed to reopen the government, Representative Mark Meadows of North Carolina, a White House ally who leads the hard-line Freedom Caucus, argued that the wall fight was vital to the president’s re-election hopes.

“It’s not lost on any of us that a central component of what he said when he ran in 2016 has to be addressed in a meaningful way,” he said in a recent interview.

Privately, some of Mr. Trump’s 2016 aides have said they are pessimistic about his path to 270 electoral votes after his party’s midterm defeats in states like Michigan, Pennsylvania and Wisconsin. An Associated Press poll on Wednesday showed that Mr. Trump’s overall approval rating had fallen to 34 percent, with his support among Republicans dipping below 80 percent — a startling turn for a president who strives for total control of the G.O.P., and has usually achieved it.

The Mueller investigation looms as another destabilizing force for the president. David Kochel, a Republican strategist based in Iowa who is opposed to Mr. Trump, said the special counsel’s eventual report could determine whether Mr. Trump is vulnerable in a primary.

“That will be a focusing mechanism for the party,” Mr. Kochel said.

While core Republican voters remain loyal to him and he is not currently facing a contest for the nomination, Mr. Trump’s low standing with political moderates and especially women is leading some G.O.P. officeholders to voice unease about having him at the top of the ticket next year.

“I think it’s healthy and appropriate for the party to consider in 2020 whether this is really the path it wants to continue taking,” said David F. Holt, the Republican mayor of Oklahoma City, where a Democrat won a stunning House upset last year thanks in part to the suburban antipathy toward Mr. Trump.

The 2020 election is nearly two years away and Mr. Trump has ample time to build a political operation, marshal support from financial backers and make his case to the American people. Mr. Trump captured the presidency with a largely improvisational candidacy, guided by his own instincts for personal combat and cultural division, and lacking the strategic discipline of most presidential campaigns.

But even among his own political lieutenants, there is a general recognition that Mr. Trump currently lacks anything resembling a positive message.

Mr. Trump is especially fixated on two well-known Democrats, speaking frequently about Joseph R. Biden Jr., the former vice president whom Mr. Trump regards as his most dangerous potential opponent, and Senator Elizabeth Warren of Massachusetts. Some of his advisers are more preoccupied with two other would-be challengers, who would offer a starker generational contrast with the 72-year-old president: Senator Kamala Harris of California and Beto O’Rourke, the former Texas Senate candidate.

In this volatile moment, however, Mr. Trump and his aides have been just as focused on heading off competition from fellow Republicans. In addition to helping direct a resolution of support from the R.N.C. — Mr. Trump tweeted approvingly Saturday morning, suggesting re-election “should be easy’’ — Mr. Stepien, the former White House political director, has been leading an effort to ensure there is no insurrection at next year’s convention in Charlotte, N.C.

Now a top aide on Mr. Trump’s campaign, Mr. Stepien and his deputies have been consulting party leaders about shutting off avenues to a challenge and ensuring that states cannot put forward “favorite son” candidates to contest the president’s renomination.

Mr. Trump has also dedicated a team of aides to guaranteeing that only political loyalists are elected to serve as delegates to the convention. To that end, Mr. Stepien dispatched some of his staff members this month to see that their preferred candidate remained in charge of the Maine Republican Party.

The fruit of some of those efforts were on display at the R.N.C. meeting outside Albuquerque, where enthusiasm for Mr. Trump was undimmed, at least publicly. The party leaders ignored Mr. Stone’s arrest, which took place just hours before they gathered, and Ronna McDaniel, the party chair, did not deviate from her prepared remarks, lashing the media for promoting “manufactured scandals.”

Jeff Kent, the party committeeman from Washington State, offered perhaps the most ferocious tribute to the president, brandishing his red “Make America Great Again” hat as he addressed officials.

Other Republicans view Mr. Trump’s political stumbles as an opportunity to lure a challenger into the race, with Mr. Hogan emerging as a new subject of their efforts. At a December conference hosted by the Niskanen Center, a right-of-center think tank, Mr. Hogan spoke briefly with William Kristol, an implacable Trump critic in the conservative press, who argued that the president is weaker than widely understood, people briefed on the conversation said.

Mr. Hogan, 62, is set to meet more formally in the coming weeks with Mr. Kristol and Sarah Longwell, a Republican strategist helping marshal opposition to Mr. Trump. Mr. Kristol and Ms. Longwell have been meeting with Republican donors and potential challengers, sharing focus-group and polling data about the president’s vulnerability with what they call “Reluctant Trump Voters,” according to a copy of their presentation reviewed by The New York Times.

Mr. Hogan is planning a trip to Iowa in his capacity as an officer of the National Governors Association. But his advisers also recently reached out to Mr. Kochel, the Iowa-based strategist, to ask that he put together a dinner with similarly minded Republicans while Mr. Hogan is there, according to an associate of Mr. Kochel briefed on the exchange.

Jerry Taylor, president of the Niskanen Center, said Mr. Hogan had “made it clear that the door is open to a potential candidacy, but no decision has been made.”

In addition to Mr. Hogan, William F. Weld, the former Republican governor of Massachusetts, is weighing a challenge to Mr. Trump as a small-government moderate, people who have spoken with him said. Mr. Weld, 73, who was the Libertarian Party’s vice-presidential nominee in 2016, has discussed either opposing Mr. Trump in the Republican primaries or seeking the Libertarian presidential nomination.

Mr. Weld declined to comment on his deliberations, and Mr. Hogan declined through an aide to be interviewed.

Other Republicans known to be entertaining campaigns against Mr. Trump include John R. Kasich, the former governor of Ohio, who ran in 2016; Senator Ben Sasse of Nebraska; and Jeff Flake, the former senator from Arizona. But Mr. Sasse is said to have grown uneasy about the idea, and Mr. Kasich and Mr. Flake are pursuing opportunities in television.

“A primary challenge in 2020, as of today, would be futile for anyone,” Mr. Berke said.

Still, Republican donors will want to know just how damaged the president may be by the end of this year before they truly commit to a challenge.

Asked if he would be willing to raise money for a primary opponent to Mr. Trump, Stanley Druckenmiller, a New York-based investor who has given millions to Republican candidates, said, “If I thought such a candidate would be a good president and had a realistic chance of securing the nomination, yes, of course.”