Turkish officials to head to Tripoli ‘in the coming days’ for talks after GNA head announces he plans to step down. 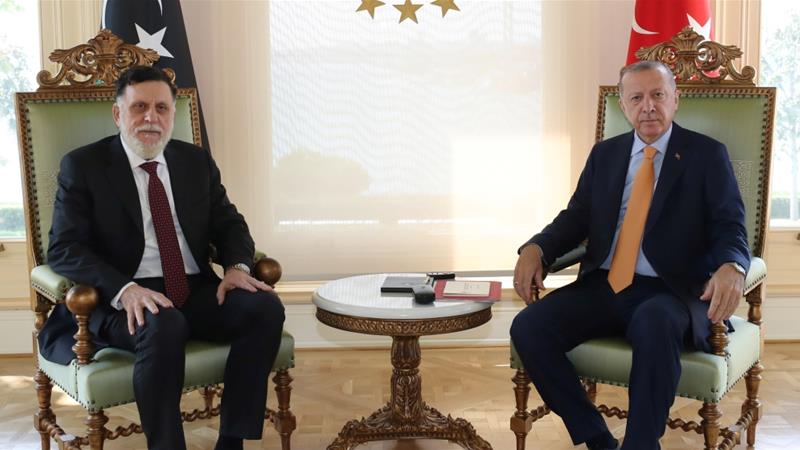 Turkey will continue to support Libya’s internationally recognised government despite Prime Minister Fayez al-Sarraj announcing last week that he planned to step down by the end of next month, according to President Recep Tayyip Erdogan’s spokesman.

Ibrahim Kalin said on Monday that Turkish support for the Tripoli-based Government of National Accord (GNA) and their bilateral agreements, which include a security pact and a maritime demarcation deal signed last year, would continue.

“These accords will not be impacted by this political period because these are decisions made by the government, not by any individual,” Kalin told Demiroren News Agency.

Late last year, Ankara reached an agreement with the GNA that it says grants Turkey drilling rights across a corridor of the Eastern Mediterranean – much of it within the maritime jurisdiction Greece also claims. Greece, Cyprus and other regional actors have denounced the Turkish-Libyan agreement as “illegal”, which Turkey denies.

Kalin said Turkish officials would travel to Tripoli “in the coming days” to discuss developments in the wake of al-Sarraj’s announcement.

Erdogan had also hinted at upcoming talks as he expressed regret at his close ally’s stated intention to hand over power by the end of October.

“Such a development, receiving this kind of news afterwards, was of course saddening for us,” Erdogan said on Friday.

“We also conveyed some news to him,” he added. “With these meetings, God willing, we can turn this issue in the direction it’s supposed to be,” Erdogan continued, without elaborating.

Since 2014, oil-rich Libya has been split between rival powers based in the west and in the east, in a sometimes chaotic war that has drawn in outside powers and a flood of foreign arms and mercenaries.

Al-Sarraj has headed the GNA since its formation in late 2015 as a result of a United Nations-brokered political agreement aimed at uniting and stabilising Libya after the turmoil that followed the toppling of longtime leader Muammar Gaddafi in 2011.

Turkish military support for the GNA in June allowed it to repel a 14 month-long offensive by forces loyal to eastern-based renegade commander Khalifa Haftar, who is supported by the United Arab Emirates, Egypt and Russia.

The GNA declared a ceasefire last month and called for the lifting of a months-long blockade on oil output. The leader of a rival parliament in eastern Libya also appealed for a halt to hostilities, offering hope for a de-escalation of the conflict across Libya since a 2011 uprising.

Haftar dismissed the calls, but said on Friday he would lift for one month his blockade on oil outputs and that he had agreed with the GNA on “fair distribution” of energy revenue.