Demonstrations have been taking place in Lebanon since October to demand solution to the ailing economy and corruption. 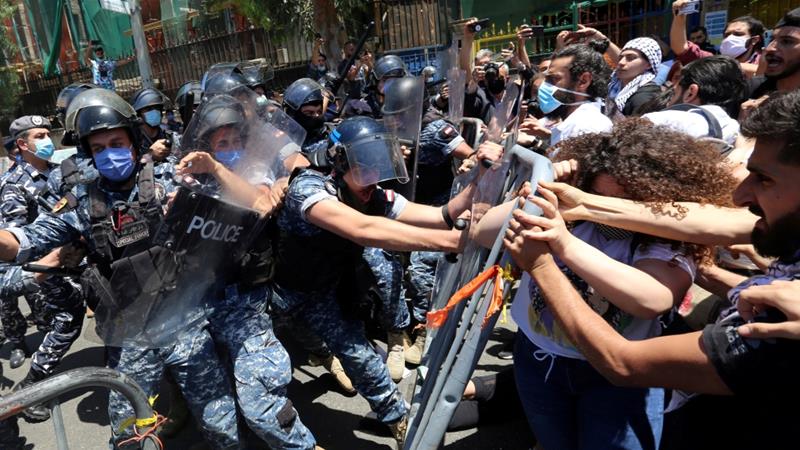 Beirut, Lebanon – Thousands of anti-government protesters filled a main square in downtown Beirut to voice their discontent at the slow pace of reforms in the crisis-hit country.

The peaceful demonstration – the largest in some three months after the country eased a nationwide lockdown aimed at stemming the spread of COVID-19 – devolved into clashes between protesters, counter-protesters and security forces.

The Lebanese Red Cross said 37 protesters had been injured, of which 11 were taken to hospitals for treatment.

Demonstrations have been taking place in Lebanon since October, when more than a million people burst onto the streets to demand a solution to the ailing economy, an end to rampant corruption and the downfall of civil war-era politicians.

“We had a small break during coronavirus [lockdown], but we’re back,” Mario Sawaya, a 65-year-old retiree, told Al Jazeera from Beirut’s Martyr’s Square.

“I don’t think they’re humans, because humans are defined by a conscience and values. They do not have any of that. This isn’t a government, it’s a zoo,” Sawaya said.

Saturday’s protest saw a more mixed crowd than previous demonstrations, after former governing parties, with a majority-Christian support base that now finds itself in the opposition, called on their supporters to participate. Some called for the removal of the arsenal of Shia Hezbollah, a powerful Iran-backed militia and political force.

Most protest groups have pushed back, focusing on immediate reform – such as a new electoral law that reverses deep gerrymandering and the independence of the country’s judiciary – before tackling such divisive issues. 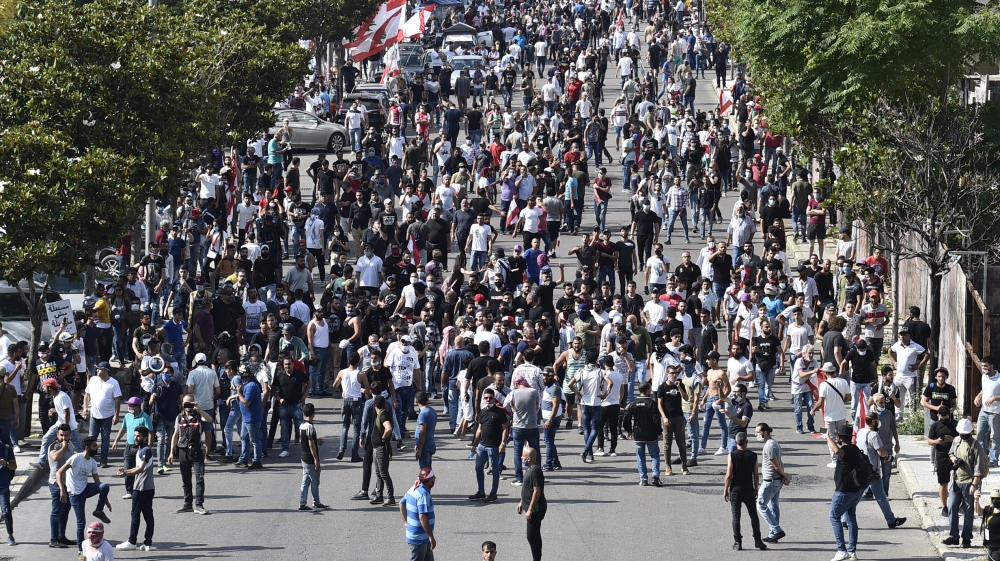 Clashes ensued when dozens of counter-protesters, who support Hezbollah and its main Shia ally the Amal Movement, emerged from a neighbourhood near Martyr’s Square and shouted sectarian slogans.

Hundreds of protesters ran towards them and hurled rocks and sticks at thick lines of riot police and soldiers. The protesters were pushed back but they clashed with security forces for several hours.

Protesters set fires on main roads and at one point destroyed police motorbikes and set one alight.

They were eventually dispersed with large amounts of tear gas.

Later, men from the neighbouring Chiyah and Ain al-Remanneh neighbourhoods on the outskirts of Beirut – majority-Shia and majority-Christian areas, respectively – clashed across a street that formerly divided Christian east and Muslim west Beirut during the country’s 15-year civil war.

Some protesters fear that the uprising’s secular goals are in jeopardy as sectarian undertones come to the fore and living conditions deteriorate.

A banner raised by activists at the protest read: “Work, health, food, housing for all.”

“We still haven’t really changed anything, but it’s either this or we die of hunger,” Camille Attar, a 19-year-old protester studying finance at a local university, told Al Jazeera as he escaped a wave of tear gas on the main north-bound highway outside Beirut.