ROME — The Houthi rebels who control the key Yemeni port of Hudaydah have agreed to enter talks about handing some control to the United Nations, its envoy to Yemen said during a visit to the city on Friday.

The initiative, although tentative, added to momentum for peace talks expected to start in the coming weeks, when the Saudi-led coalition and its Houthi foes are to meet in Sweden as a humanitarian crisis threatens to tip millions of Yemenis into starvation.

Hudaydah has been engulfed in fighting in recent weeks as the Saudi-led coalition has stepped up its assault there, partly surrounding it from three sides. That has prompted fears that the port, a major channel for food and fuel imports, could be cut off.

The United Nations sees a deal on Hudaydah as an important first step toward ending the war. But any arrangement to turn the port over to international supervision would also need a green light from the United Arab Emirates, the Saudi ally leading the military assault.

During a visit to Hudaydah on Friday, where fighting has lulled in the past week, Martin Griffiths, a United Nations envoy, said Houthi officials had agreed to talks on the port’s status.

“I am here to tell you today that we have agreed that the U.N. should now pursue actively and urgently detailed negotiations for a leading U.N. role in the port and more broadly,” he said.

Mr. Griffiths did not specify what the United Nations role might be. Previous peace efforts have collapsed amid deep distrust between the Saudi-led coalition and the Houthis, who are allied with Iran.

The Yemen conflict, which has been grinding on since 2015, has gripped attention internationally in the past month because of dire warnings of a humanitarian catastrophe from United Nations officials and intense scrutiny of Saudi actions after the killing of the Saudi dissident Jamal Khashoggi in Istanbul. 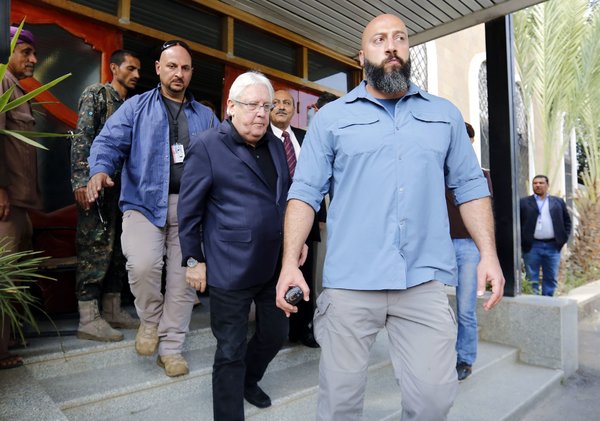 The Houthis failed to turn up in Geneva for the last peace talks in September. This time, Mr. Griffiths is seeking assurances that will assuage their fears of being intercepted by Saudi forces as they travel into and out of Yemen.

“For the U.N., it’s clear that Hudaydah has to be a city of peace,” said Lise Grande, the United Nations humanitarian coordinator, who is traveling with Mr. Griffiths. “We were in Hudaydah to look at possible options. We are ready to play a leading role in Hudaydah if asked.”

The Saudi-led coalition enforces tight restrictions on ships entering Hudaydah in an effort to prevent Iranian-supplied weapons from reaching the Houthis. This has contributed to a ruinous surge in food and fuel prices in Yemen, pushing millions of people to the brink of starvation. On Wednesday, the aid agency Save the Children estimated that 85,000 children might have died of hunger since 2015.

The United Arab Emirates plays a leading role in the fight for Hudaydah. Emirati warplanes pound Houthi targets in the city, and Emirati money and weapons are driving the Yemeni militias that are fighting on the ground.

The recent surge in fighting broke a monthslong stalemate around the city, and now the Houthis control only a single road that exits the city to the north.

The fight has eased in the past week as both Houthi and coalition representatives have indicated their willingness to participate in peace talks in Sweden. Western officials say Emirati officials have privately expressed a desire to find a way out of the war.

But much depends on the Saudi crown prince, Mohammed bin Salman, who started the war in March 2015 as part of an aggressive foreign policy. He has since become mired in a cloud of global outrage over Mr. Khashoggi’s killing.

Prince Mohammed arrived in the United Arab Emirates on Friday ahead of a scheduled appearance at a Group of 20 summit meeting in Argentina next week — his first trip outside Saudi Arabia since the furor erupted.

Farea al-Muslimi, a Yemen expert at Chatham House in London, questioned whether the United Nations had the expertise to run a major port.

“It doesn’t have the right staff or resources and is too bureaucratic,” he said, noting that it took the United Nations a year to set up a system of checks on ships entering Hudaydah port.

But, he added, “If the envoy can succeed in neutralizing Hudaydah as an issue, it could be a very good beginning toward the end of Yemen’s war.”