Lebanese protesters say they will rally again after a night of demonstrations in which they stormed several ministries. 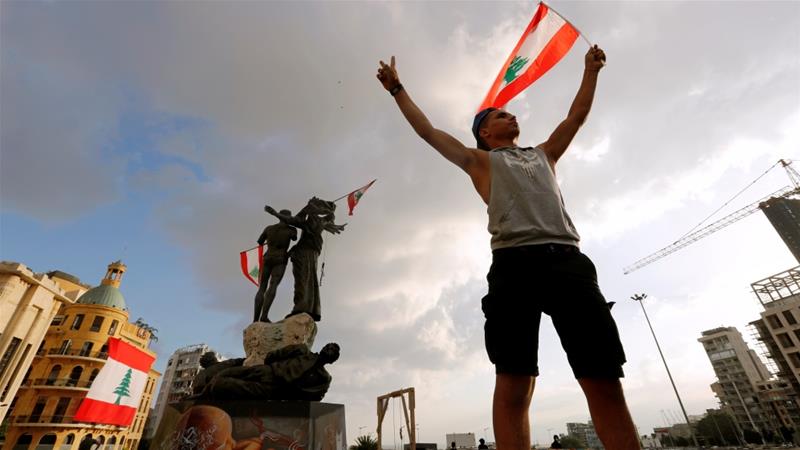 Lebanese protesters enraged by official negligence blamed for the enormous explosion in the capital Beirut have vowed to rally again after a night of demonstrations that saw protesters storm several ministries.

“Prepare the gallows because our anger doesn’t end in one day,” warned one message circulating on social media in response to Tuesday’s earthquake-strength explosion of thousands of tonnes of ammonium nitrate left in a port warehouse for seven years.

People defied dozens of teargas canisters fired at them and hurled stones and firecrackers at riot police, some of whom were carried away to ambulances.

One policeman was killed and the Red Cross said more than 170 people were injured.

“The police fired at me. But that won’t stop us from demonstrating until we change the government from top to bottom,” Younis Flayti, 55, a retired army officer, said on Sunday.

Nearby, mechanic Sabir Jamali sat beside a noose attached to a wooden frame in Martyrs’ Square, intended as a symbolic warning to Lebanese leaders to resign or face hanging.

“Every leader who oppresses us should be hanged,” he said, adding he will protest again.

Soldiers in vehicles mounted with machine guns were stationed beside the square.

“I worked in Kuwait for 15 years in sanitation to save money and build a gift shop in Lebanon and it was destroyed by the explosion,” said Maroun Shehadi.

“Nothing will change until our leaders just leave.”

The calls for renewed protests came as French President Emmanuel Macron in Paris was to oversee a UN-backed virtual donors conference to raise aid for Lebanon, a country already mired in a painful economic crisis.

In Beirut, the fury on the streets has further shaken the embattled government of Prime Minister Hassan Diab, which saw its first cabinet resignation when the information minister, Manal Abdel Samad, quit on Sunday.

“After the enormous Beirut catastrophe, I announce my resignation from government,” she said, apologising to citizens for having failed them.

The revelation that Lebanese state officials had long tolerated a ticking time-bomb in the heart of the capital has served as shocking proof to many Lebanese of the rot at the core of the state apparatus.

The death toll from the explosion stood at 158 people, with 60 still reported missing, and a staggering 6,000 wounded, many by flying glass as the shockwave tore through the city.

The blast, whose mushroom cloud reminded many of an atomic bomb, left a 43-metre (141 foot) deep crater at Beirut’s port, said a security official, citing French experts working in the disaster area.

The country’s worst peacetime disaster has reignited a protest movement against the reviled ruling elite that first flared last October but had faded amid economic hardship and the coronavirus pandemic.

Embattled Prime Minister Diab said on Saturday he would propose early elections to break the impasse that is plunging Lebanon ever deeper into political and economic crisis.

At least six lawmakers have also quit since the August 4 explosion.

The head of Lebanon’s Maronite church, Patriarch Bechara Boutros al-Rai, joined the chorus of people pressing Diab’s entire cabinet to step down over a blast he said could be “described as a crime against humanity”.

“The resignation of an MP or a minister is not enough … the whole government should resign as it is unable to help the country recover,” he said in his Sunday sermon.

The protesters demand the wholesale removal of Lebanon’s ruling class, which they see living in luxury while millions endure job losses, deepening poverty, power blackouts and mountains of garbage piling up in the streets.