Home » Latin America » Is the honeymoon period over for Brazil’s Bolsonaro?

Is the honeymoon period over for Brazil’s Bolsonaro? 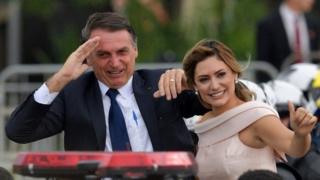 He said he would deliver a safer Brazil to appease those worried about rising violence, an economic turnaround after several years of crisis and – perhaps most central to his campaign – an end to old-style corrupt politics which have seen dozens of high-ranking politicians, including a former president, jailed.

For millions of Brazilians fed up with the status quo, the gun-loving former army officer was the only man for the top job despite sexist, racist and a homophobic remarks he made during the campaign.

While 100 days in office may not be long enough to judge the president’s performance, some of his erstwhile supporters are now expressing doubts about his ability to lead the largest democracy in Latin America.

And among his detractors, there is definitely a feeling of “I told you so” after his first months were beset by a series of problems.

Late last month, the president caused outrage by suggesting the armed forces commemorate the start of military rule 55 years ago. His anti-corruption image has been tainted by allegations that his son Flavio was involved in financial scandals and death squads.

And then of course, there was that awkward time during carnival when he posted a video on Twitter of a sex act performed by two men at a street party that he felt was bringing the reputation of the country down.

He has now got the lowest approval rating recorded by a first-time president in the initial 100 days in power since the country returned to democracy in the 1980s.

“The feeling is that the situation is worse than it was before the elections,” says Rafael Alcadipani, an associate professor at the Getulio Vargas Foundation. “Everyone wanted change in society but the commander-in-chief hasn’t shown himself to be capable of delivering any type of change.”

“He’s failed to show Brazilians confidence in his plan for government,” says Roberta Braga, associate director at the Atlantic Council’s Adrienne Arsht Latin America Centre in Washington DC. “He’s losing a lot of support. It clearly takes time to implement these very complex reforms but Brazilians expected a lot from him.”

One of Mr Bolsonaro’s campaign commitments was to bring down violence by making it easier for people to own guns. Within a couple of weeks of being sworn in, he had loosened regulations to make it easier to keep guns at home.

This was music to the ears of people like gun club member Natasha Imata, whom I met at LAAD Expo, Latin America’s largest security and defence show in Rio de Janeiro last week.

But despite his swift action on gun ownership, Ms Imata thinks that the new president is “not focussed on security”.

Her husband Vitor agrees. “His whole campaign was focussed on helping Brazilians but that’s not happened. It’s been a weak start,” he says.

From bullish to confused

Brazil’s stock market and currency soared after Mr Bolsonaro’s election in what some dubbed the “Bullsonaro wave”. But since he took over power on 1 January, signals have been more mixed.

While many in the industry point to a strong economic team led by market-friendly economy minister Paulo Guedes, unemployment levels have remained stubbornly high.

There is also a reluctant acceptance that the government may not be able to push through much-needed reforms such as pension cuts as easily as it had hoped.

“We have serious doubts about the capacity of the government to continue to do these reforms,” says Andre Perfeito, chief economist at Necton brokerage in São Paulo. “Bolsonaro’s main promise was pension reform. And he’s not doing the political job to deliver that.”

Others though, are more upbeat.

Walter Maciel is the CEO of independent asset management company AZ Quest: “Most of the old political leaders were not re-elected and went home. There is a major renovation in congress, a new government that was elected by people who desired a huge change, not only in the way the country was led but also in the way that politics was done.”

“So you have a lot of new people coming in, many of them coming in without any political experience. Of course there’s some kind of externality and undesired volatility but it’s part of the learning process,” Mr Maciel says.

Government worker Gabriel Moraes voted for Jair Bolsonaro but says he would not do so again. He thinks the president needs to be more statesman-like and has so far failed.

“As a head of state, any message he sends out is a reflection of society today,” Mr Moraes argues. “Life in civil society isn’t like an army barracks. Sure there has to be order and discipline but there have to be principles, rules and respect too.”

But his cousin Alessandra Guadelupe Regondi disagrees. A big fan of President Bolsonaro, she says he represents something very different, something that Brazil needs.

With a military background in her family, Ms Regondi warmed to the politician during the campaign.

His promises of cutting ministries in the government and making it more efficient, for example, appealed to her and she has even got a photo of the two of them together, in pride of place on her bookshelf in the living room.

Ms Regondi does not see any problem with the president’s social media habit. “It helps him get closer to the people,” she argues.

“Leaders were always from the same parties,” she says. “He’s a new hope, like Donald Trump was. He went against everything – and still won.”