Home » Europe » World Reacts to Trump’s Diagnosis With Shock, Unease and Some Glee

World Reacts to Trump’s Diagnosis With Shock, Unease and Some Glee

LONDON — Some pointed to the irony of it. Others offered well wishes. More than a few said it was just deserts.

From London to Rome to Nairobi, the revelation on Friday that President Trump had tested positive for the coronavirus was met with a mix of surprise and unease, even as some saw it as a comeuppance.

Many pointed out that Mr. Trump had contracted the virus after disregarding health protocols and downplaying the pandemic while it ran rampant in the United States. Others noted his dismissal of scientific advice about the pandemic, which has been core to his messaging around the virus.

“I am sorry, but he deserved it,” said Vincenzo Altobelli, 27, an engineer from Milan who was visiting his brother in central Rome. His brother, Cuono Altobelli, a financial analyst who joined him for an after-breakfast walk, agreed.

“He kept sending the message that coronavirus was not a serious thing,” he said. “If you sow wind, you can only reap a tempest.” 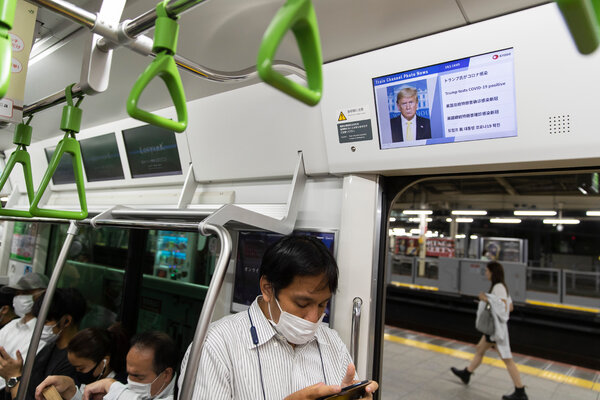 The French newspaper Le Monde published a cartoon depicting President Trump sitting in a corner of a boxing ring, unmasked, with his opponent in the opposite corner — the coronavirus. Outside the ring, his Democratic challenger in the presidential campaign, Joseph R. Biden Jr., was wearing a mask with arms folded.

Many Twitter users around the world made a point of mocking President Trump’s suggestion in April that injecting or ingesting a disinfectant might aid in combating the virus.

Others were more sympathetic to the president’s plight.

In Berlin, Frank Wortmann, 49, said he was surprised about the result and wished the president well.

“It goes to show you it can get anyone, from the president of the United States on down,” he said.

In Kenya as in much of the world, the hashtag #TrumpHasCovid was the top trending topic on Twitter.

Patrick Gathara, 48, a Kenyan political commentator, said that while there was an immediate reaction from many that the president was somehow deserving of the virus, he wanted to focus on a more humane response.

“Trump will get a bit of lashing and some people might even celebrate,” he said. “I don’t think it should be celebrated, but he would be deserving if people came out and reminded him that he brought this unto himself, that he ignored science and scientists.”

He said he hoped the president and his advisers would learn from the ordeal.

“Does this mean the U.S. changes how it handles the virus?” he asked. “What do they do learn from this? Or does it become another thing that happened, and they don’t learn much from it?”

Danielle Van Elewyck, a 62-year-old pharmacist in Brussels, said it was hard for her as a European to understand Trump’s mentality, especially taking into account the lack of universal health care in the United States.

“I don’t think it is normal. But this is why the situations in Europe and the United States are incomparable,” she said. “Maybe people there have a different approach to those things.”

Some worried that the president’s infection might sow fear in the American public and upend the campaign ahead of an already fraught presidential election campaign.

“That’s not what we needed right now,” said Giulio Livoni, a 53 year-old-lawyer in central Rome. “He has a campaign to do, and we really need the United States to be in good shape at the moment.”

In Brussels, Marie-Pierre Chapuis, a 45-year-old researcher for a company that produced face masks, also said she felt it could be a learning experience for Mr. Trump.

“If he has light symptoms, he will probably continue saying that this virus is nothing. If he gets seriously ill — which of course I don’t wish for anyone — maybe he will change his views and realize Covid-19 is not a joke,” said Ms. Chapuis as she was strolling down a street in the Belgian capital.

Perla el Ahmad, a 21-year-old college student in Tripoli, Lebanon, said she would not say she was happy about the president’s illness, but added: “It’s just satisfying to see someone who downplayed the virus all this time end up catching it.”

In Britain, where Prime Minister Boris Johnson was hospitalized in April after contracting the virus, many were unsurprised.

“Like Boris, Trump has been shaking hands and dismissing masks,” said Annie Fen, a 40-year-old hairdresser in north London. “So of course, I’m not surprised.”

Yet Ms. Fen said she doubted Mr. Trump’s infection would make him change his response to the coronavirus, “because his pride is just too big for that,” she said.

“Good luck to him, still,” she added.

President Trump’s announcement that he had contracted the coronavirus upended the 2020 race in an instant, threatening his already dimming hopes for re-election.

Romanian gang stole £4,400 of perfume in one day during 4-month spree across UK