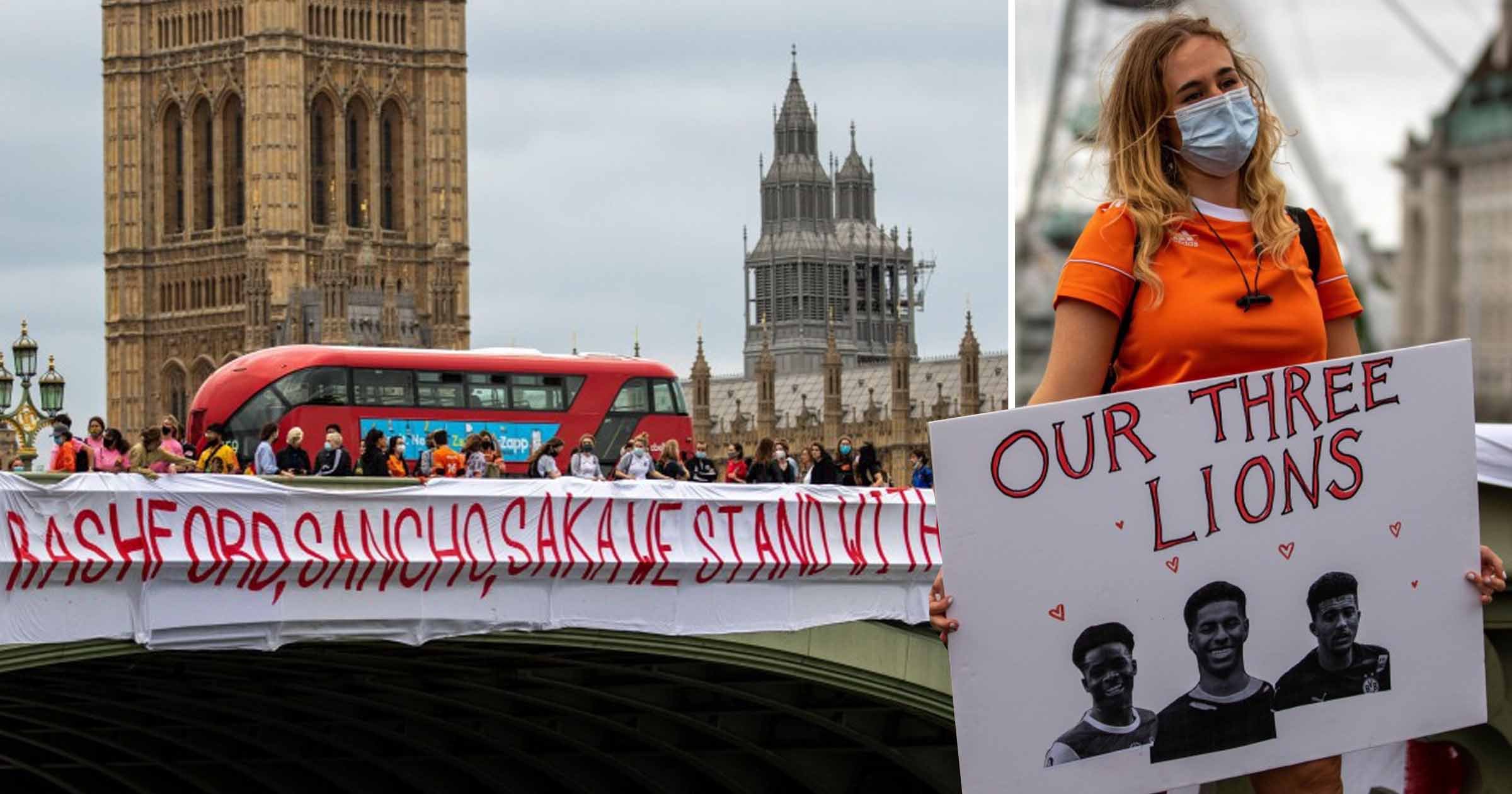 Female football teams across London have come together to show solidarity to Marcus Rashford, Bukayo Saka and Jadon Sancho after they received racist abuse following the Euro 2020 defeat.

Teams from the Super5 – a league for women, non-binary and LGBTQ players – gathered on Westminster Bridge with flares and banners in support of the black England football stars.

The trio were flooded with racist comments on social media after missing penalties on Sunday night’s game.

Less than an hour after the final whistle blew, a mural of Rashford in Manchester was also defaced – though this was quickly covered with touching tributes from members of the local community.

In the latest show of solidarity, grassroots football team Peckham-based Legends FC organised a protest calling for an end to racism in the game.

A spokesperson for the club told Dazed: ‘Black exceptionalism should not be a requirement for being treated with a basic level of decency.

‘We were dismayed but not surprised at the abuse levelled at our great young players – who are doing so much on and off the pitch and inspired so many.

‘As fans and a diverse group of female grassroots players, we wanted to show our solidarity and love to Rashford, Saka, and Sancho.’

Around 100 people from other female and non-binary grassroots teams took part in the protest.

They held signs and placards saying ‘hate will never win’ and ‘our three lions’.

Lush Lyfe FC, another team that took part, wrote on Instagram: ‘Along with loads of our lush grassroots footy pals last night we took part in a banner drop on Westminster Bridge. We want to tell Marcus, Saka, Jadon and the whole England team, that we have been so proud to support them during this tournament. They have shown true leadership and huge courage, both in how they played and in their actions off the pitch.

‘We also want to send a clear message to Government and football’s governing bodies that empty words and ‘condemning’ racist behaviour after the fact is not good enough.

‘Politicians should be leading from the front: supporting players actions; condemning racism and all forms of abuse; as well as using every power available to them to implement measures that will tackle racism across online platforms and in stadiums up and down the UK.’

The racist abuse faced by three three stars sparked a row in Westminster, with many Tory MPs warning the party is on the wrong side of social change.

England players who knelt before games to protest against racism were booed by some England fans during the Euro tournament.