With a Ban on Navalny’s Group, Putin Sends Clear Message to Biden

MOSCOW — A court on Wednesday designated Aleksei A. Navalny’s political movement as extremist, a remarkable broadside by President Vladimir V. Putin that also sent a message to President Biden ahead of their meeting next week: Russian domestic affairs are not up for discussion.

The court decision — almost certainly with the Kremlin’s blessing — seemed likely to push the resistance to Mr. Putin further underground, after several months in which the Russian government’s yearslong effort to suppress dissent has entered a new, more aggressive phase. Under the law, Mr. Navalny’s organizers, donors, or even social-media supporters could now be prosecuted and face prison time.

The ruling heightened the stakes of the summit in Geneva for Mr. Biden, who has promised to push back against violations of international norms by Mr. Putin. But the Russian president has said that, while he is prepared to discuss cyberspace and geopolitics with Mr. Biden, he will not engage in talks over how he runs his country. The question is how much Mr. Biden accepts those demands.

“Views on our political system can differ,” Mr. Putin told the heads of international news agencies last week. “Just give us the right, please, to determine how to organize this part of our life.”

The Geneva meeting on June 16 will come after months in which Mr. Putin has dismantled much of what remained of Russian political pluralism — and made it clear that he would ignore Western criticism.

Mr. Navalny was arrested in January after having returned to Moscow upon recovering from a poisoning last year that Western officials say was carried out by Russian agents. Since then, thousands of Russians have been detained at protests; leading opposition politicians have been jailed or forced into exile; online media outlets have been branded “foreign agents”; and Twitter and other social networks have come under government pressure.

“The state has decided to fight any independent organizations with total bombardment,” Mr. Navalny’s Anti-Corruption Foundation — one of the groups declared extremist on Wednesday — said in a Twitter posting anticipating the ruling.

The Kremlin denies playing any role in the campaign against Mr. Navalny and his movement, and insists Russia’s judiciary is independent. Analysts and lawyers, however, widely see the courts as subordinate to the Kremlin and the security services, especially on politically sensitive cases.

Mr. Putin has already signaled that he will reject any criticism of the Kremlin’s handling of the Navalny case by claiming that the United States has no standing to lecture others. At Russia’s marquee annual economic conference in St. Petersburg last week, Mr. Putin repeatedly invoked the arrests of the Capitol rioters in Washington in January when challenged about repression in Russia or its ally Belarus.

“Take a look at the sad events in the United States where people refused to accept the election results and stormed the Congress,” Mr. Putin said. “Why is it only our non-systemic opposition that you are interested in?”

The “non-systemic opposition” is the Russian term for political groups that are not represented in Parliament and are openly calling for Mr. Putin’s removal from office. For years, they have been tolerated, even if they were closely surveilled and often persecuted. The court’s Wednesday ruling signaled that this era of tolerance was coming to an end. 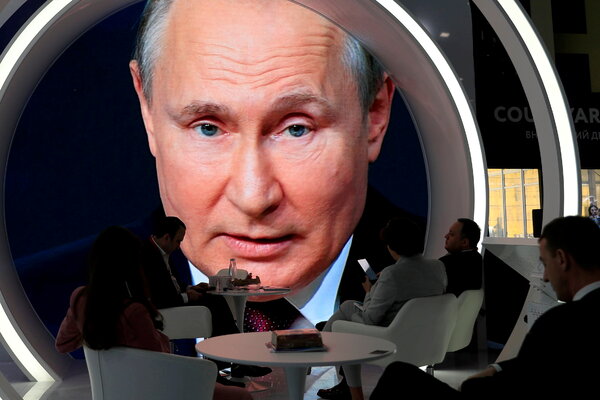 Prosecutors had harried Mr. Navalny and other opposition figures, but usually under pretexts, such as violation of rules on public gatherings, of laws unrelated to their political activities or, more recently, of regulations against gatherings to limit the spread of the coronavirus.

Behind the scenes, according to Western governments and rights groups, the Kremlin had gone further: assassinating or driving into exile journalists, dissidents and leaders of the political opposition. Mr. Navalny narrowly survived an assassination attempt with a chemical weapon last summer. In 2015, another opposition leader and a former first deputy prime minister of Russia, Boris Y. Nemtsov, was shot and killed with a pistol. But officials denied any role in those actions.

The dismantlement of Mr. Navalny’s nationwide network marked a new phase of a crackdown on dissent through a formal, legal process for disbanding opposition organizations, even though the country’s 1993 Constitution guarantees freedom of speech.

The Kremlin’s campaign against the opposition gained intensity after Mr. Navalny’s return in January from Germany, where he was receiving medical treatment after the nerve agent attack. Police arrested Mr. Navalny at the airport and a court sentenced him to two and half years in prison on a parole violation for a conviction in an embezzlement case that rights group say was politically motivated.

In power since 1999 as either prime minister or president, Mr. Putin’s tightening of the screws on dissent and opposition has come gradually. In a long twilight of post-Soviet democracy during his rule, elections took place, the internet remained mostly free and limited opposition was tolerated. His system has been called “soft authoritarianism.”

But prosecutors this spring requested that the court outlaw Mr. Navalny’s movement, using a designation that likens its members to terrorists, without bothering to make much of a public case that the nonprofit groups were in fact seditious organizations. The evidence was classified and the case heard behind closed doors in a Moscow courtroom.

A lawyer representing the organizations, Ivan Pavlov, who had access to the evidence but not the authority to disclose it, said after a preliminary hearing that it was unconvincing, and that he would make public as much as the law allowed. Within a few days, police detained Mr. Pavlov on charges of disclosing classified evidence in another case, unrelated to Mr. Navalny, in what looked like a warning to avoid aggressively defending Mr. Navalny’s organization. He faces up to three years in prison.

The anti-extremism law offers wide scope for a sweeping crackdown on the opposition in coming days or months, Russian legal experts say, but it remains unclear how it will be enforced.

Under the law, the group’s organizers could face prison terms of up to 10 years if they continue their activities. Anybody donating money could be imprisoned for up to eight years. Public comment such as social media posts in favor of Mr. Navalny’s groups could also be prosecuted as support for extremists.

The case targeted three nonprofit groups, Navalny’s Headquarters, the Fund for Fighting Corruption and the Fund for Defending Citizens’ Rights. In a preliminary ruling, the court ordered a halt to some of these groups’ activities last month.

Anticipating the final ruling, associates of Mr. Navalny disbanded one of the groups, Navalny’s Headquarters, which ran his network of 40 political offices, before the court had an opportunity to designate it as an extremist group. Mr. Navalny’s aides said they hoped some offices would continue to work as stand-alone, local political organizations.

“Alas, we must be honest: it’s impossible to work under these conditions,” an aide to Mr. Navalny, Leonid Volkov, said in a YouTube video, warning that continuing to operate would expose supporters of the opposition leader to criminal prosecution. “We are officially disbanding the network of Navalny offices.”

When they announced the case in April, prosecutors argued that Mr. Navalny’s groups were in fact seditious organizations disguised as a political movement. In a news release, prosecutors said that “under the guise of liberal slogans these organizations are busy forming conditions for destabilizing the social and sociopolitical situation.”

Prohibited from forming a political party, Mr. Navalny has instead worked through various nongovernmental organizations. These groups have persisted for years, despite unrelenting pressure from the Russian authorities, to push an anticorruption drive that has frustrated and embarrassed Mr. Putin, often using social media to great effect.

Mr. Navalny’s movement has been the most prominent in Russia openly calling for Mr. Putin’s removal through elections, and his supporters say the Kremlin was determined to crush that effort before it could yield fruit.