And Kate’s blue outfit was certainly the right flavour to impress loyal Scots. The couple made the Indian flatbread as they helped a Sikh community group prepare curry and rice for vulnerable families. Prince William told the Sikh Sanjog volunteers in the cafe kitchen at Edinburgh’s Palace of Holyroodhouse: “I love curry…not too spicy. Kate likes a bit of spice.”

But her music-making at an anti-violence project they visited earlier nearby struck the wrong note with William, 38.

He was keen at first as Kate, 39, used a type of drum machine at the Violence Reduction Unit in Cockenzie, saying: “I could spend hours in here doing stuff. It’s quite addictive.” But as her beats built up, he quipped: “It might catch on – in about a hundred years. It’s hurting my ears.”

At the project, backed by the police and the Scottish government, they saw young people doing music production, bike maintenance and martial arts. But William dodged an invitation to join the Muay Thai boxing, saying he had left his kit behind. 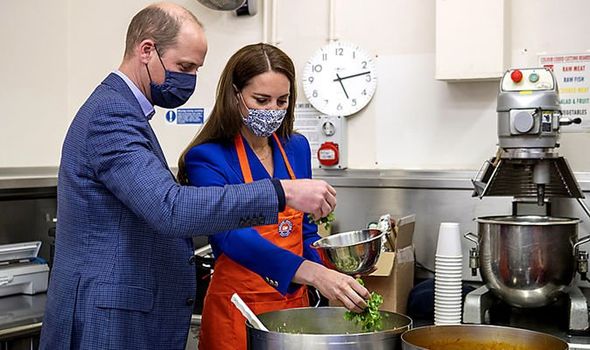 Kate had joined him on his fourth day of engagements in Scotland.

The couple also talked to recovering drug addicts who help others rebuild their lives, on a visit to Turning Point Scotland in Coatbridge, North Lanarkshire.

Neil Richardson, the chief executive of Turning Point, said they appeared in the pandemic: “People were creating all sorts of cocktails and people were dying.”