Home » Europe » What music is being played during the Queen’s funeral?

What music is being played during the Queen’s funeral? 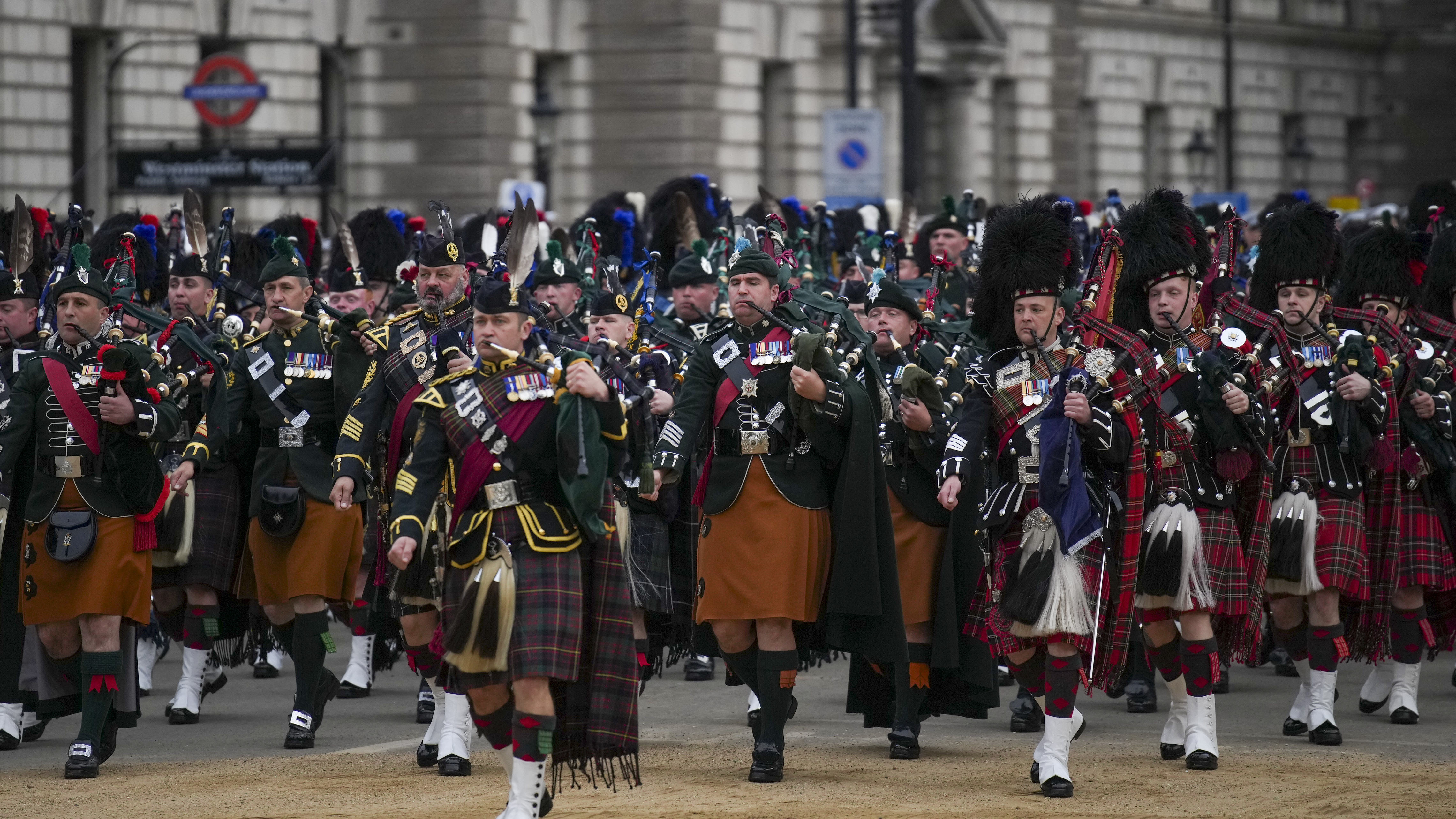 The expected 4.1billion people who are tuning in to watch Queen Elizabeth II’s funeral will hear a number of different marches, hymns, and compositions being played for the historic occasion.

The procession of Queen Elizabeth II’s coffin from Buckingham Palace to Westminster Hall saw the likes of Beethoven, Chopin, and Mendelssohn being played.

But what music will accompany the historic occasion?

Here is everything you need to know.

What music is being played at the Queen’s funeral?

Before the ceremony, as the 2,000 invited guests file into their seats, the Assistant Organist of Westminster Abbey, Matthew Jorysz, will play the following music on the organ:

The day Thou gavest, Lord, is ended

The first of three hymns will be sung as after The Very Reverend Dr David Hoyle MBE, Dean of Westminster, gives the bidding.

This hymn was performed during the Diamond Jubilee of Queen Elizabeth II’s great-grandmother, Queen Victoria, in 1897.

The Lord’s my Shepherd

The next hymn was one of Her Majesty’s favourites, having featured in a list of the late monarch’s top 10 pieces of music in 2016.

It was also sung at the funeral of the Queen’s father George VI in St George’s Chapel, Windsor Castle, in 1952, and at the Queen’s wedding to Prince Philip in 1947 so is a piece of music close to her heart.

The hymn will be sung after Prime Minister Liz Truss’ reading.

The final hymn will be sung after The Lord’s Prayer is said.

It was written by Charles Wesley, who wrote over 6,500 hymns including, most famously, Hark! The Herald Angels Sing.

The song was sung at weddings including William and Kate’s, Charles and Camilla’s wedding blessing, and Princess Eugenie’s.

O Taste and see how gracious the Lord is

The choir will sing O Taste and see how gracious the Lord is, which was composed by Ralph Vaughan Williams for the Queen’s Coronation in 1953.

This will be sung following the prayers.

Two new pieces of music have been specially composed for Her Majesty’s funeral.

The first is an unaccompanied musical setting of Psalm 42 from the Bible’s Book of Psalms by British composer Judith Weir CBE.

Speaking to Moira Stuart on Classic FM, Weir told Stuart that the ceremony will be, ‘a beautifully performed occasion… even as a musical experience’.

It is a setting of a text from the New Testament’s Epistle to the Romans.

My Soul, There Is A Country

The song is one of six motets which make up the composer’s Songs of Farewell.

Parry is a favourite of King Charles III, and in 2021, the then-Prince of Wales presented a film on Parry’s life titled, The Prince and the Composer.

The Last Post, a musical ‘call’ associated with military ceremonies and wartime remembrance, plays from the Lady Chapel at the end of the service.

The distinctive three-note tune is usually played on a trumpet, cornet, or bugle, and is seen as a final farewell to symbolise that the duty of the fallen soldier was over and they could rest in peace.

Following the melody is a two-minute silence as mourners in Westminster Abbey and watching at home reflect on the Queen and her 70-year reign.

The Reveille, a similar three-note tune to the Last Post, is played to mark the end of the silence.

After the two-minute silence, the Reveille is sounded by the State Trumpeters followed by the national anthem, God Save The King.

The lyrics have been changed from ‘The Queen’ to ‘The King’ to reflect that King Charles III is now the monarch.

The Sovereign’s Piper of the Royal Regiment of Scotland will help close her state funeral with a bagpipe rendition of the traditional piece.

As the coffin and procession exit the church, Holder will perform Fantasia in C minor BWV 562 by Johann Sebastian Bach.

Edward Elgar makes another appearance at the funeral, with Allegro maestoso (Sonata in G Op 28) being the last song played.

Which choir is performing at the Queen’s funeral?

The Choir of Westminster Abbey, led by musical director, James O’Donnell, is singing during the Queen’s service.

Dating back to the 14th century, the all-male choir is made up of 30 boys, who all attend the Abbey’s Choir School, and 12 professional adult singers, known as Lay Vicars.

The choir will be joined by The Choir of His Majesty’s Chapel Royal, who sang alongside the Abbey’s singers when the Queen’s coffin was brought to lie in state at Westminster Hall on Wednesday, September 14.

What music has been played at the funerals of other royals?

At King George VI’s funeral, the hymns The Strife is O’er, the Battle Done, and Sir Henry Walford Davies’ God Be in My Head, were performed.

The Queen also requested Hubert Parry’s Ye Boundless Realms of Joy be performed as the final voluntary at her father’s funeral.

At the funeral of Prince Philip, the Duke of Edinburgh, viewers heard the likes of Benjamin Britten’s Jubilate in C, The Lesser Litany, Bach’s Prelude, and Fugue in C minor.