Home » Europe » Wedding Receptions Are Back, and Italy’s Candy Makers Are Delighted

Wedding Receptions Are Back, and Italy’s Candy Makers Are Delighted

SULMONA, Italy — Workers ladled sugar water on the almonds roasting in spinning copper basins. They set them to tumble hypnotically in tubs of chocolate, collected the confections spit out of packaging machines and loaded white, blue, pink and green varieties onto crates.

As Italy lifts a more than a yearlong ban on wedding receptions, the production of confetti — the traditional sugarcoated almond confections that Italian brides spoon out to their wedding guests — is roaring back, and all of Sulmona is experiencing a sugar rush.

“We are on our way,” said Mario Pelino, whose candy factory, Confetti Pelino, looms Wonka-like over the fertile Abruzzo valley, tucked between the high Apennine Mountains.

Sulmona may be the birthplace of Ovid, the ancient Roman poet who wrote, “the Art of Love.” It may have come to prominence as a crossroads for Italy’s great sheep migrations. It may have wonderful hiking and special red garlic. But most Italians know it best as Italy’s candy land, the ancestral home of the wedding party favors, sometimes known as Jordan Almonds, that are beloved in Italy’s south and by Italian grandmas everywhere.

On a recent morning, the candy shops along Ovid Avenue bloomed with colorful bouquets of the confections, wrapped in colored plastic and tied together so that the almonds resembled the petals of sunflowers, daisies and crocuses. Shopkeepers filled clear plastic bags with the traditional white sugarcoated almonds for upcoming weddings. Brides-to-be got ready for confetti season. 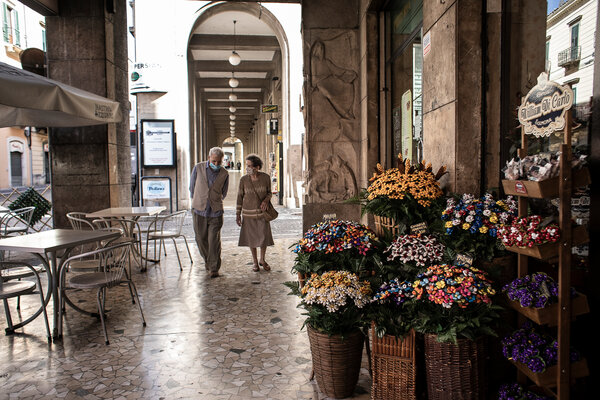 “Give it a spin,” a seamstress told Giada Di Natale, 27, as she tried on a dress she had picked out more than a year ago for her engagement party, during which green confetti are traditionally served. She was supposed to have gotten married on July 18, 2020, but was forced to delay her I-do’s until the same date this summer.

“Every morning, the first thing I did on my phone was type in ‘News,’ and “Weddings,’” Ms. Di Natale said. Last month, that search yielded more heartache. Italy’s prime minister, Mario Draghi, urged “a little more patience,” in a country where weddings have markedly declined over decades and where the birthrate is one of Europe’s lowest.

Ms. Di Natale said that she and her fiancé had already put off starting a family, and that she had lost weight during the year from anxiety. It was a different story for many mothers of brides, said Antonella D’Alessandro, the owner of the shop where Ms. Di Natale tried on her dress. They instead have often asked to let the dresses out after “all the staying home,” Ms. D’Alessandro said.

Finally, on May 17 this year, the Italian government took the leap and ruled that wedding receptions could return in June, with social distancing restrictions. Ms. Di Natale said she immediately placed her orders for red confetti flowers at the Pelino factory, to match her shoes.

The news was also received warmly in City Hall, where weddings are usually celebrated in the council chamber. “Naturally, we put out confetti,” said Manuela Cozzi, the city’s top tourism official.

Daniela Napoleone, 38, a self-declared “would-be bride of 2020,” waited the other day outside Sulmona’s cathedral for an appointment with a priest. She and her partner of 19 years, with whom she has two children, plan to get married in September. They were supposed to have had their ceremony last June.

“He finally proposes,” she said. “And a pandemic explodes.”

The priest, Domenico Villani, ushered them into his office, furnished with a large glass jar filled with confetti. “I eat them all the time,” he said.

Ms. Napoleone said her relatives down in Naples, where confetti are wildly popular, responded to the big news of her wedding plan by asking whether there would be a confetti buffet corner, with a variety of flavors and colors.

“In one way or another,” she assured them, “they will be there.”

Father Villani said he himself had missed celebrating nuptials. The number of religious weddings plummeted from 24 in 2019, to 5 in 2020. But he also told couples that there was no rush. Lockdown, he said, gave some couples living in close quarters a chance to reflect if marriage was wise.

“Not getting married can also be a blessing,” he said.

Sulmona started catering to the sweet tooth of wealthy families in the 1400s, when nuns at the Monastery of Santa Chiara, now a museum just off the main piazza, candied nuts from the abundant almond trees and turned them into rosaries. Confetti quickly became more associated with parties than piety.

At the 1494 nuptials of Lucrezia Borgia, to which only the most beautiful women of Rome were invited — without husbands — according to an account by the 19th-century historian James Dennistoun, the “Pope presented a silver cup of confections, which, amid much outrageous merriment, were emptied into their bosoms.”

The Vatican still parties with confetti, a tradition that the artisanal producer Confetti Rapone said helped compensate for the lockdown’s wedding downturn. The company reported that throughout the pandemic, prelates in the church hierarchy made big orders of confetti for blow outs to celebrate the anniversaries of their ordinations — silver confetti for a 25th anniversary, gold for the 50th.

Sulmona has a history with the church. Its abbey, now a popular wedding venue, is built on the cave where Celestino V lived as a hermit after renouncing the papacy in the 13th century. Confetti shops are filled with photos of John Paul II and Benedict XVI accepting ornate packages and blessing confectioners.

“The popes are gluttonous,” said Mr. Pelino, whose family has made confetti since 1783.

Despite a 90 percent reduction of business in 2020, Pelino remains the big confetti game in town. Mr. Pelino, a chemist by profession, expressed appreciation for ending up in a family business that exists to make customers smile, whether they are people around town or the Emir of Qatar, who splurged for his daughter’s wedding.

Along with the renewed optimism among candymakers here runs an undercurrent of bitter rivalry.

The art nouveau shop of Confetti Rapone is painted in delicious pastel pink and blue. It bursts with baskets of confetti flowers and candy-filled jars. Green, glass-doored cabinets contain a kaleidoscope of treats, including confetti in a patented saffron flavor, as well as grape, cherry, limoncello, whisky and ginger candy, for palate cleansing between meat and fish courses at receptions.

“Our clientele is high market,” said Luigi Giammarco, 76, of the Rapone family, who dripped with disdain for Sulmona’s other candy makers. “There are Fiat 500s and there are Ferraris.”

Signs in the store list among its VIP clientele pontiffs, the driver of the popemobile, and George Clooney, who stayed here for months in 2010 filming The American. If the candy-makers around town are to be believed, Mr. Clooney subsisted almost entirely on their sugarcoated almonds.

The Rapone family has refused wedding orders in recent weeks because it is slammed until mid-October. Besides the brisk Vatican business, Mr. Giammarco said, wealthy secular clients kept the company busy throughout the pandemic. The rich, he said, kept celebrating weddings despite the restrictions, and they happily obliged.

“I mean, if they could get away to the Maldives, they can get married,” said his daughter, Valeria Giammarco, 32, the 10th generation of this confetti-producing family.

She rolled samples into palms with a candy shovel. “Only the best raw materials, no additives,” she said. Other brands, she whispered, were “carcinogenic.”

At the William Di Carlo confetti shop down the street. Enrica Ricci said that unlike some others “who I won’t name,” her products were natural. “We pay attention to quality.”

Asked if the government’s wedding announcement had helped business, Francesco Di Carlo, a descendant of the company’s founder, began to answer.

“I can talk,” Ms. Ricci snapped, and said she was receiving calls from betrothed couples all over Italy. But the brand, which had been the official confectioners of Italy’s former royal family, had also diversified from weddings, engagements, communions and other major life moments, she said.

“These,” she said, offering some green sugar-covered pistachios, “you can eat with a beer.”