Angry Brexit voters were furious at the “traitorous” actions of MPs in the House of Commons for not delivering what the British people voted for in the historic 2016 EU referendum. Speaking to Express.co.uk while on the March to Leave, organised by Brexit campaign group Leave means Leave, voters said they “would not put up with being stitched up”. Speaking between Sunderland and Hartlepool, several seething Brexit voters criticised the Prime Minister’s agreement and called for the UK to leave the EU without a deal.

Barry, from Sunderland, said: “Theresa May had to step up to the plate, unfortunately, she is a Remainer. This deal that she has put forward is worse than being in the European Union.”

Lesley, a member of Green Leaves, from Sunderland, added: “I wanted to come along to show our solidarity and complain about the traitorous way the House of Commons has betrayed Brexit.”

One voter insisted the Brexiteers were “sending a message” to MPs to ensure Brits get the Brexit they voted for. 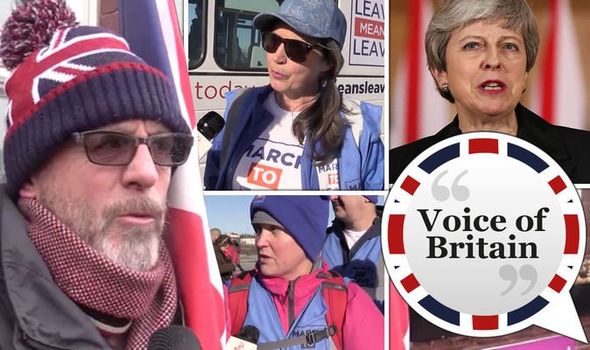 Rob, from Hartlepool, warned the “country is about to overturn democracy”, adding: “It is the biggest threat this country faces in hundreds of years.”

Brexit voters also claimed they were fed up with “patronising” remarks from Remain supporters.

The comments from the Brexit supporting British voters came before a turbulent week for the Prime Minister as she travelled to Brussels to ask for an extension to Article 50 after MPs voted for a delay.

On Thursday evening at the EU summit, the EU27 agreed to extend Britain’s departure from the European Union until May 22, if MPs back Mrs May’s withdrawal agreement.

If the Prime Minister’s Brexit deal is rejected by MPs, then the UK will have a shorter delay, until April 12, when Britain must then set out whether it wants to leave without a deal or agree to a longer extension.

Following the outcome of the EU summit, Downing Street has said Theresa May is “absolutely determined” to end the uncertainty over Brexit. Her official spokesman said: “There is now a clear point of decision.

“If we are able to have a successful vote next week then we can pass the necessary legislation for ratifying the agreement and we can, as a country, be outside the European Union two months today.

“The Prime Minister is absolutely determined to try to end the uncertainty and deliver clarity for the country and for employers.”

Speaking in Brussels on Friday, the President of the European Council said he was “happy” about the decision by the EU27, as he insisted the fate of Britain “is in the hands of our British friends”.

He said: “As regards to Brexit the European Council formalised last nights decisions by the EU27 and the UK to delay the cliff edge and allow for an extension. Personally, I am really happy about this development.

“As I said yesterday it means that until April 12 anything is possible. A deal, a long extension, if the UK decided to rethink its strategy, or revoking Article 50 which is a prerogative of the UK Government. The fate of Brexit is in the hands of our British friends. We, the EU, are prepared for the worst, but hope for the best. As you know, hope dies last.”

Mrs May is expected to bring back her withdrawal agreement in front of MPs next week for a third meaningful vote, with the deal already being overwhelmingly rejected twice.

But, on Friday, the Prime Minister wrote to MPs telling them she may not seek to bring her Brexit deal back to the Commons next week if there is not sufficient support for it.

The Prime Minister said if the withdrawal agreement is rejected again, or is not put to a vote next week, the UK could ask for another extension to its EU membership before April 12.

Mrs May wrote: “The Council’s decisions mean we have a clear choice: 1. We can revoke Article 50 – but that would be to betray the result of the referendum.

“2. We can leave with no deal on 12 April – but the House has previously said this is not something it will support.

“3. If it appears that there is not sufficient support to bring the deal back next week, or the House rejects it again, we can ask for another extension before 12 April – but that will involve holding European Parliament elections.

“4. If it appears that there is sufficient support and the Speaker permits it, we can bring the deal back next week and if it is approved we can leave on 22 May.”

On Saturday thousands of Brits are expected to march in London demanding another vote on Britain’s departure from the European Union.

Another 148 people die with coronavirus bringing UK death toll to 44,798