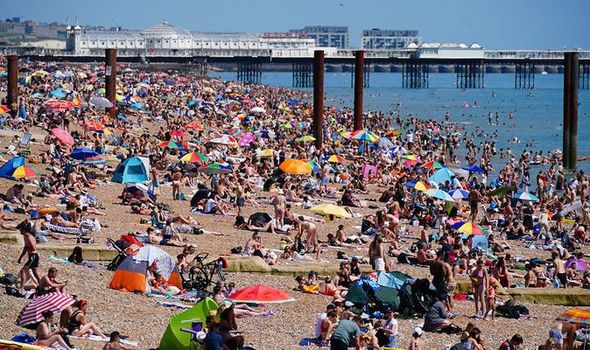 With temperatures this week predicted to get even warmer, bookmakers have slashed the odds on this July being the hottest on record. Crowds flocked to beaches from 7am yesterday as a plume of hot air from the Azores hit our shores. The Met Office recorded a temperature of 90.7F at London’s Heathrow Airport, officially making it the hottest day of the year so far – although Tuesday is forecast to be even hotter.

Thousands of people descended on Bournemouth beach yesterday, as children happily played in the sand and sea.

Seafront car parks were full by 9.30am and the approach road to neighbouring Sandbanks was closed to keep visitors at bay.

Enormous queues formed at ice cream kiosks while people had long waits for fish and chips and other snacks.

Huge crowds were seen at beaches, including Weymouth, Southend, Blackpool, Brighton and Tyneside.

Coleen Rooney was among those enjoying the sunshine, treating her four sons – Kai, Klay, Kit and Cass – to a day out at Blackpool Pleasure Beach.

The Midlands and Yorkshire were among the hottest places across the weekend.

Scotland enjoyed temperatures in the 70s, with Wales hitting the mid-80s, with a high of 84 in Cardiff.

In Northern Ireland, the mercury reached a sizzling high of 88F in Ballywatticock on Saturday, making it the hottest day in the province’s history.

Yesterday’s high temperatures mark the beginning of an official heatwave across the UK, when the temperature hits specific measurements for at least three days.

Tragedy had struck at Croyde Beach in north Devon on Saturday, when a woman died after being hauled from the sea.

Sunbathers watched in horror as the woman failed to respond to CPR given by lifeguards.

The body of a teenage boy was recovered yesterday from the River Eden at Rickerby Park beauty spot in Carlisle.

Cumbria Police were alerted at 9pm on Saturday and the body was found at 11.45am yesterday.

Thirteen emergency vehicles raced to Pugneys Country Park in Wakefield, West Yorks, yesterday afternoon after reports somebody had fallen critically ill while in the water.

A coastguard helicopter landed at Durdle Door, in Dorset, yesterday after a woman fainted.

Hundreds of sunbathers parted to allow it to land on the shingle beach before the casualty was treated by the coastguard and paramedics.

HM Coastguard said the woman had collapsed on the beach in the afternoon after a suspected jellyfish sting.

A witness said: “They airlifted the person up to the main car park and put them into an ambulance.”