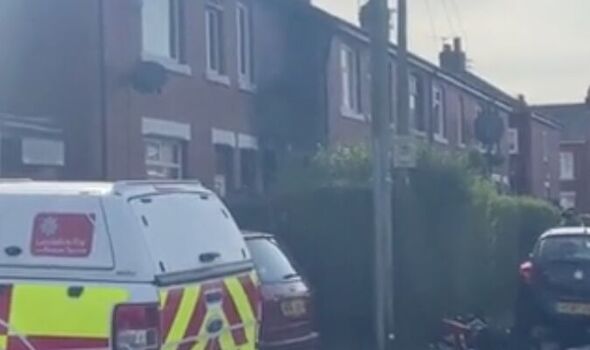 The incident, on Friday night, was described as an “explosion” by the leader of Preston City Council, while police said it is currently “unexplained”. The two kids as well as a woman in her twenties, all present as the fire ripped through the house, were rushed to hospital.

Police and fire crews, who were called to an address on Coronation Crescent, raced to the terraced home to find two minors and one adult in need of medical treatment.

Four fire engines from Preston, Penwortham, Bamber Bridge, and Hyndburn were sent to the area.

Around 8.50pm, the fire was extinguished but crews remained on scene to complete the damping-down stage.

A spokesperson for Lancashire Police told LancsLive: “Three people — a woman aged in her 20s and two children aged three and five — have been taken to hospital in a critical condition.

“Their next of kin have been informed and are being supported by specially trained officers.

“The incident is currently being treated as unexplained. A cordon is in place around the address and we are asking people to avoid the area if possible.

Matthew Brown, leader of Preston City Council, wrote on Twitter: “Really concerning to hear about the explosion at a property in Avenham this evening.

“Thoughts and prayers with all those affected by what looks like an extremely serious incident.”