Two killed in gunfight as shots masked by Diwali fireworks 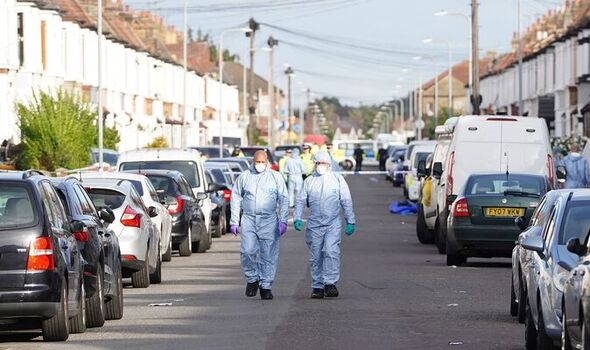 A gunman wearing a Joker mask killed two men and critically wounded a third – the shots masked by the sound of Diwali fireworks. A suspect wearing a “black Joker mask” and his accomplices were spotted running through nearby gardens shortly after the murders in a residential street, said a neighbour.

One resident said the killings were part of a gang feud. They said: “It was a planned hit, an execution – and timed because of the Diwali fireworks.”

Neighbours told how they mistook the gunshots for pyrotechnics set off to mark the Hindu Festival of Lights.

The killer and his henchmen are said to have arrived at the scene in two cars around midnight.

Scotland Yard said officers were called to Henley Road, Ilford, Essex, at 12.16am on Tuesday.

A spokesman said two men in their 20s died at the scene.

Paramedics battled to save the third man, in his 30s. He is in hospital fighting for his life.

Kashif Patel, 33, said the carnage was part of a gang feud. “My mates are all acquaintances of the dead,” he said. “It’s Ilford vs Manor Park. It’s rival gangs.”

Mr Patel said the feud was made worse after a local rapper posted a video online threatening a rival.

The musician is apparently one of the victims.

Student Zain Mohammad said he was told that two cars pulled up and shot at three people.

Samima Ahmad, 50, said: “I heard some screams and shouting. I was shaken by the screams around 12.15am. There were a bunch of youngsters running around, it was a gang of people.

“There was an ambulance, helicopters and police, it was very frightening.”

She added: “The shots were obscured by the fireworks.

“I didn’t know what happened until this morning. It’s very concerning, what next?”

Neighbour Alex Raducu, 33, added: “I thought it was just fireworks…then I heard a helicopter above me.”

A Met Police spokesman said: “Police believe they know the identity of a victim in his 20s.

“Work to confirm the identity of the other man is ongoing.

“At this early stage, there have been no arrests.”

Five people have been killed within a 10-mile area of east London in the past week.

He added: “Not nearly enough is being done to combat violent crime and protect my constituents. I will be having urgent conversations with the Met.”

Jas Athwal, the leader of Redbridge Council, said at the scene: “We’ve been complaining about the lack of officers around the area…we need more of a physical presence.”

Anyone with information is urged to contact police on 101. Callers who wish to remain anonymous can ring Crimestoppers on 0800 555 111.