Turkey Claims to Have ‘Captured’ Cleric’s Relative in Kenya

ISTANBUL — Turkey’s intelligence service claims it has “captured” a Turkish citizen accused of links to a cleric they say orchestrated a failed coup, and taken him from his home in Kenya to Turkey, the state-run Anadolu news agency reported Monday.

The man, Selahaddin Gulen, is reported to be the nephew of Fethullah Gulen, an Islamic preacher based in the United States who is accused of orchestrating a coup against President Recep Tayyip Erdogan in 2016.

Mr. Erdogan faced down the coup attempt and cracked down hard in the aftermath, imposing a state of emergency for two years, detaining 100,000 people and purging 150,000 public employees from their jobs.

More than 8,000 military personnel were prosecuted for their part in the insurrection.

Abroad, the crackdown has involved the forced renditions of 100 or more Gulen supporters and the closing of dozens of schools run by his movement.

Teachers and administrators of some of the schools have been extradited or deported with the cooperation of some countries, but Turkey was also prevented from transporting a Turkish educator from Mongolia in 2018.

Turkish officials pressured countries including Kenya to close Gulen-backed private schools, which are in major cities including Nairobi and Mombasa. While the Kenyan government didn’t shut down the schools, the pressure was indicative of Mr. Erdogan’s influence and how far he would go to break up the Gulen movement. 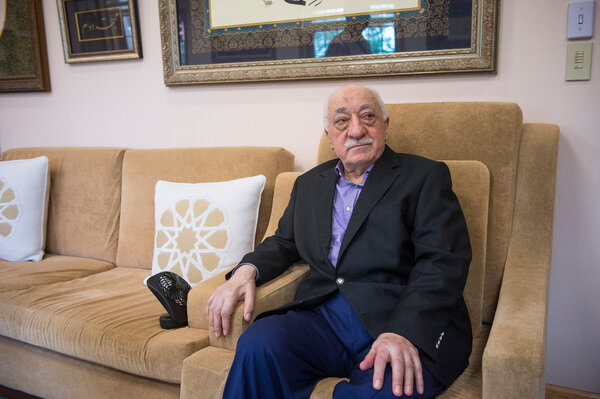 Relations between Kenya and Turkey have strengthened in the past decade, with the two countries signing agreements in security and technical cooperation. In 2020, trade volume between the two countries grew to $251 million, according to the Turkish foreign ministry.

Mr. Gulen was living in Kenya and was fighting a legal battle to avoid deportation by the Kenyan government.

He disappeared several weeks ago, even as his legal case was still before the courts.

It was not the first time that Turkish security agencies have detained someone in Kenya. In 1999, Turkish intelligence, with the help of American and Kenyan security officers, captured the Kurdish rebel leader Abdullah Ocalan and took him back to Turkey.

It was unclear what role Kenya played, if any, in the capture of Mr. Gulen.

In a video shared online, his wife, Seriyye Gulen, said she had been living in Kenya since last November and that she last saw her husband on May 3. She said she believed he was “kidnapped and taken to Turkey on May 5.”

Citing security sources, the Anadolu news agency said that Turkey’s National Intelligence Organization, MIT, captured Mr. Gulen abroad and brought him to Turkey. The report said Mr. Gulen was related to people in the FETO movement. FETO is an acronym for the Gulen movement used by the Turkish government.

The news agency provided no further details, although Mr. Erdogan had said on May 19 that Turkey had captured a senior member of the Gulen movement.

“Soon we will announce an important name from the FETO team too,” Mr. Erdogan said, speaking to youngsters in Turkey’s National Youth and Sports Day. “He is in our hands right now.’’