MOSCOW — For years, state propaganda in both Russia and China has painted Western democracy as dangerously chaotic compared to what it described as the safety and stability of the countries’ authoritarian systems.

Russia seized that chance, while China was more restrained, perhaps reflecting cautious optimism that a President-elect Joseph R. Biden could stabilize relations with the United States. Neither country, however, congratulated Mr. Biden for winning the election, a silence that in itself served to underline the messiness of American democracy.

A spokesman for President Vladimir V. Putin of Russia couched the delay as a technical matter of diplomatic protocol, and pledged that Mr. Putin would be ready to work with “any elected president of the United States.” The spokesman, Dmitri S. Peskov, told reporters that the Kremlin would wait until Mr. Trump’s court challenges to the election results run their course.

“We believe it would be proper to wait for an official announcement” of the results, he said. “There are certain legal procedures pending that were announced by the current president.”

Chinese officials are awaiting Mr. Trump’s official concession before congratulating Mr. Biden, a spokesman for the Ministry of Foreign Affairs suggested on Monday.

The delayed recognition of Mr. Biden as president-elect was striking after a weekend during which leaders from around the world congratulated Mr. Biden on his electoral victory — even close allies of Mr. Trump like Prime Minister Benjamin Netanyahu of Israel. In Russia, it was clear that the Kremlin saw the tumult in Washington as an opportunity to criticize the United States rather than to try to improve ties. 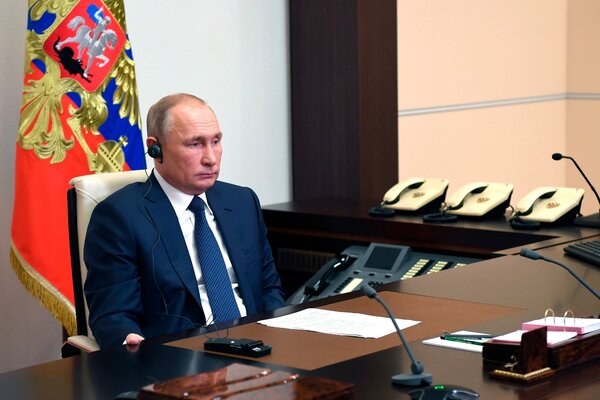 On the flagship weekly news program on state TV Sunday night, host Dmitri Kiselyov said the election showed the United States to be “not a country but a huge, chaotic communal apartment, with a criminal flair.” On a political talk show, a lawmaker, Oleg Morozov, said American democracy had deteriorated to the point that “one can manipulate it, tune it, tamper with it to achieve a certain result.”

In Russia, elections are tightly scripted affairs, with challengers to the ruling party winning in very rare cases and popular opposition politicians generally unable to get on the ballot. But on Monday, Ella A. Pamfilova, the head of Russia’s Central Election Commission, took her turn at sounding off on the superiority of Russian governance. She said she had studied mail-in voting and decided against using it in Russia because it was too vulnerable to cheating.

“This anachronism in its American version opens up boundless possibilities for potential fraud,” she told Tass, a state-run Russian news agency — echoing one of Mr. Trump’s favorite claims, though no evidence of such fraud has emerged. “It turns out I was right. What’s going on now in the United States is the best illustration of that.”

The Kremlin may well miss Mr. Trump. While the president never delivered on Russian hopes of rapprochement between Washington and Moscow, his America-first foreign policy dovetailed with the Kremlin’s desire to weaken the Western alliance and to expand Russian influence around the world.

Mr. Biden, by contrast, has vowed to take a tougher line on Russia and to rebuild ties with America’s traditional allies. Some Russian analysts have noted potential silver linings to a Biden presidency, including a greater potential to work with Washington on matters of common interest like arms control and Iran’s nuclear program. But that optimistic narrative has been far from front-and-center on Russian state media in the last week.

For China, the calculus is even more complicated, and state media’s response to Mr. Biden’s win has been more measured. Mr. Biden would be “more moderate and mature” than Mr. Trump on foreign affairs, Global Times, a fiercely nationalistic tabloid, said. Still, the president-elect seems determined to leave in place many of Mr. Trump’s harshest measures, and China’s leaders appear to have concluded that the United States will remain irreconcilably opposed to the country’s rise.

Southern Daily, an official newspaper for the southern province of Guangdong, said that while Mr. Biden would most likely treat Russia, not China, as the biggest foreign threat to the United States, “we don’t have to have illusions.”

“One thing is for sure, things will never return to the way they were before,” the newspaper’s post on Weibo, a Twitter-like platform, continued. “The world is not the world it was before.”

Like the Russian news media, Chinese outlets emphasized the potential for political violence in the United States all last week as the vote counts trickled in. The Chinese state media shared photos of boarded-up businesses and police officers on watch at poll sites. A narrative of American decline has been a constant refrain in recent months, as an increasingly wealthy and confident China has tried to market itself to the rest of the world as a viable alternative for global leadership.

Mr. Trump, about an hour earlier, had tweeted, falsely, that he had won the election. The People’s Daily account retweeted that post, adding the comment, “HaHa” and a laughing emoji.

But that provocative rhetoric had largely ebbed by Sunday, in a reflection of official hopes for a reset. Many major state-controlled outlets offered straight news coverage of Mr. Biden’s victory speech in Delaware. People’s Daily deleted its tweet.

Russia state television, however, on Monday continued to echo Mr. Trump’s narrative of a stolen election. On a popular state television talk show, a correspondent reporting from Washington cited an outlandish and baseless claim from a corner of the American right that Democrats were readying Gulag camps for Trump supporters — a reference to the Stalin-era labor camps that killed more than a million people in the Soviet Union.

Reporting was contributed by Ivan Nechepurenko in Moscow and Vivian Wang in Hong Kong.