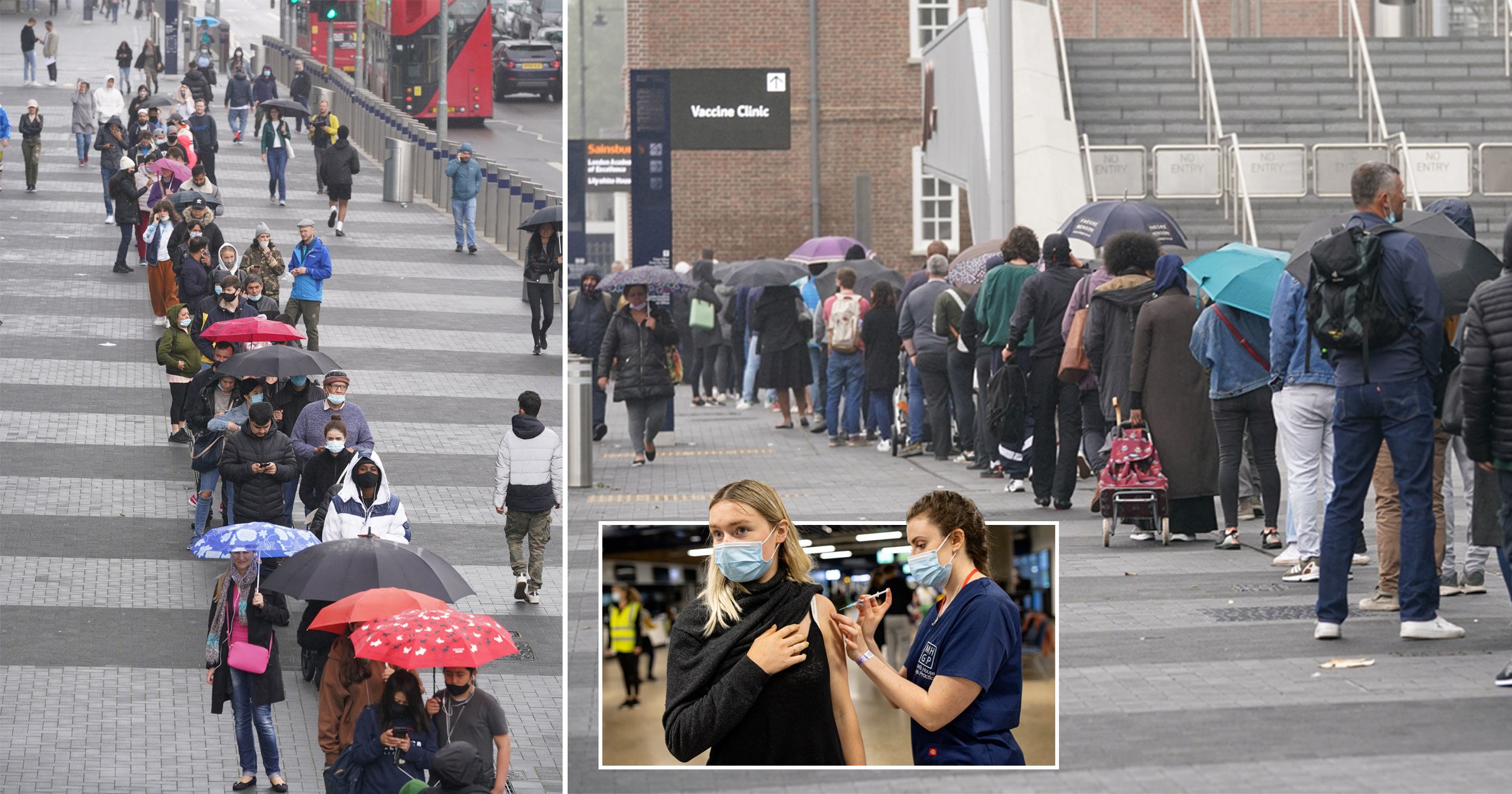 Thousands of people queued for hours in the rain for jabs on Sunday as the vaccination drive reached its final major phase.

Anyone in England over 18 can now get vaccinated, with NHS officials braced for a surge in bookings.

Meanwhile flood alerts were in place across southeast England as downpours brought an end to the recent heatwave.

A mass vaccination clinic at the Tottenham Hotspur Stadium in London was one of many sites where the streets were lined with queuers braving wet weather.

Former Spurs stars Gary Mabbutt, Ossie Ardiles and Ledley King were spotted posing for photos with fans who had just got their jab.

Public Health England said it should be possible for everyone over the age of 40 to get their second dose by July 19 to cement England’s chances of finally ending restrictions.

Dr Susan Hopkins, PHE’s strategic director for Covid, also called for as many people over 30 to book their second dose or go to have it administered if it is time.

She told the BBC’s Andrew Marr Show: ‘The extra time to vaccinate more people, get two doses of vaccination in as many people as possible, will hopefully mean that what we’re seeing with this wave won’t look the same as the previous waves that we’ve seen in this country.

‘We know that two doses of vaccination really protects against hospital admission, about 94 per cent overall and 92 per cent for AstraZeneca and 96 per cent for Pfizer.

‘Overall, as many people getting two doses of vaccination would be really good.’

She added: ‘We should be able to hit the 70% figure having two doses before July 19.’

PHE’s regional chief for London called for Londoners to keep social distancing and washing their hands as it was unlikely that the capital would be able to get all over-30s vaccinated in time for the new prospective ‘Freedom Day’.

He told LBC: ‘Get the first dose in as soon as possible because even with the first source, there is some protection that you will receive.

‘And we (will) continue to practise those preventive measures – vaccinating now won’t stop the rises we are seeing in the community this week, but they will begin to build the resilience for the city as we get to July 19.’

The capital’s mayor, Sadiq Khan, tweeted to remind people they can either book their jab or turn up at one of the many walk in centres operating.

In Bristol, a crowd of mostly young people cheered as an anti-vaxxer who had been shouting conspiracy theories at them was confronted by a steward and walked away, Bristol Live reports.

Also spotted was the leader of anti-vaccine group Footsoldiers4Freedom, who have been ambushing children at school gates with fake NSPCC leaflets discouraging mask-wearing and falsely suggesting Covid tests are a cancer risk.