Nurses, paramedics, railway staff, and bus drivers all joined arms to march on Downing Street in protest against a new Bill that could see workers sacked for striking.

Members of the Public and Commercial Services Union and Unison also attended the demo at Whitehall, which coincides with the bill’s second reading in Parliament.

The new legislation would see the right to strike restricted by imposing minimum service levels.

Under the draft Strikes (Minimum Service Levels) Bill, bosses would be legally able to fire employees who ignore a ‘work notice’ ordering them to work on days of industrial action.

It comes after months of industrial action from almost all sectors of public work in the UK over disagreements over pay and working conditions.

British Secretary of State for Business, Energy and Industrial Strategy Grant Shapps on Monday argued in the House of Commons for the need to establish minimum service and safety levels for vital public services.

But the general secretary of the TUC trade union federation, Paul Nowak, told demonstrators gathered in downtown London that he will defend the right to strike tooth and nail.

He said: ‘Make no mistake: this bill is a fundamental attack on the right to strike that will force workers across the public sector to cross picket lines or face the sack.’ 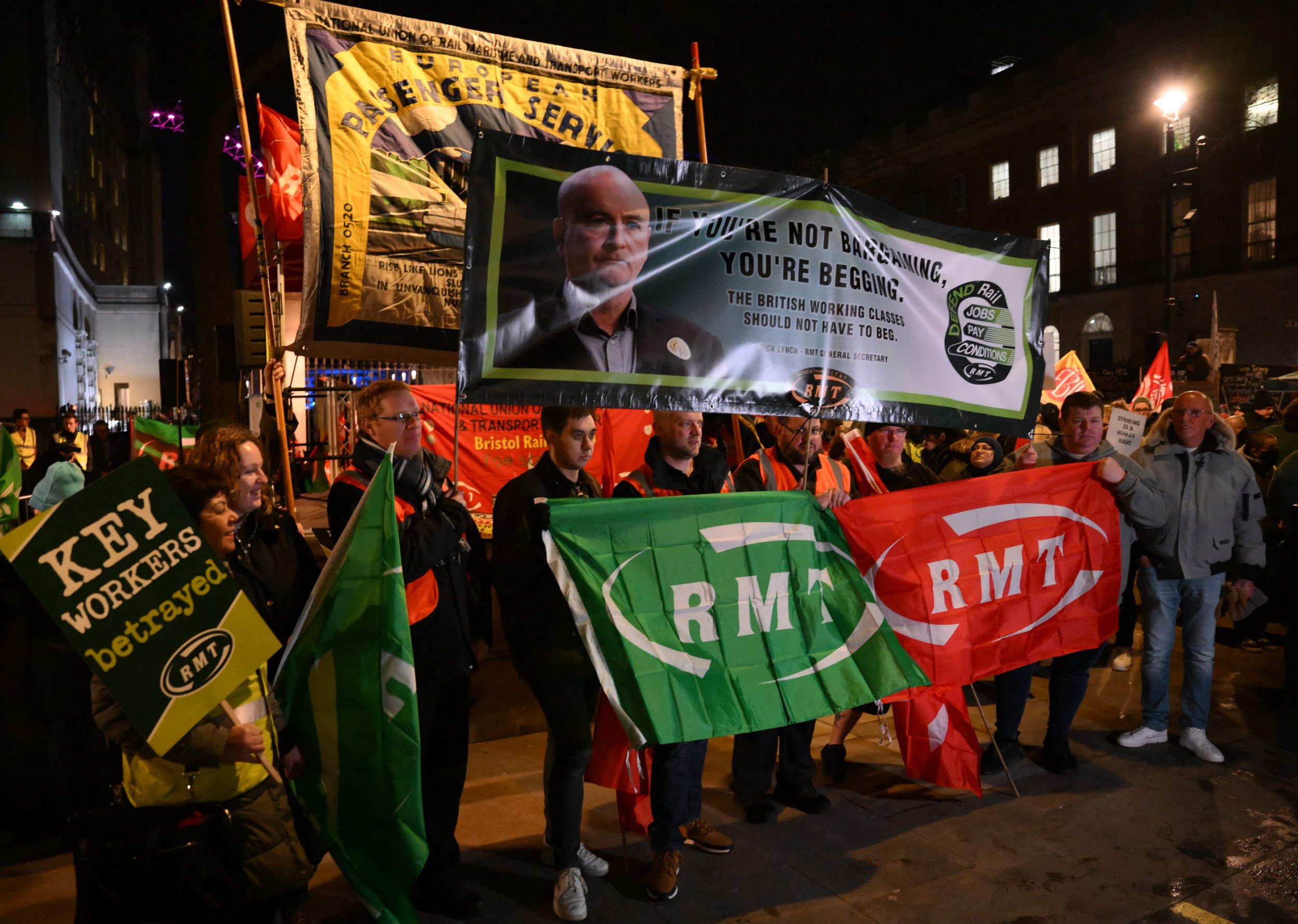 Union leader Mick Lynch called on Labour leader Sir Keir Starmer not to be a ‘vanilla politician’ and to back workers’ rights at the protest.

The general secretary of the Rail, Maritime and Transport (RMT) union said the shadow cabinet should be promising to resolve pay disputes and rip up anti-union legislation if they win the next election.

Zarah Sultana MP, also addressed the demonstrators and criticized a bill that she said was anti-worker and a threat to Britons’ civil liberties.

Addressing demonstrators from a podium, Mr Lynch said: ‘There are some people missing tonight. You get this every time you hear me.

‘We’ve got Jeremy (Corbyn), he’s with us, we’ve got SNP MPs, we’ve got Caroline Lucas from the Green Party.

The union boss said the Labour leader should not try to be a ‘vanilla politician in a vanilla suit’, adding: ‘Come and stand with us … stand up for socialism, stand up for workers and let’s change this going forward.’

Protesters chanted ‘f*** the Tories’ and ‘the people united will never be divided’ and others banged drums as they gathered in Westminster.

Addressing protesters, Jo Grady, general secretary of the University and College Union, said she was ‘keeping warm’ by thinking about how National Education Union (NEU) teachers had earlier voted to strike.

‘It’s absolutely freezing but you know what’s keeping me warm? The NEU just smashed their ballot,’ she told the crowd.

‘Picket lines, democracy, we are the champions of them and we are not going to accept any extra conditions on our ability to do that.’

Mr Corbyn condemned ‘disgusting levels of inequality’ in Britain under the Tory Government, while Ms Ribeiro-Addy, having come straight from Parliament, said the Bill’s introduction in the Commons had been ‘absolutely disgraceful’.

‘All we heard from the minister was lies, deceit and utter contempt for our public service workers,’ she told protesters.

Retired George Hallam, who attended to show solidarity with workers, likened the Bill to anti-strike action under Margaret Thatcher’s government.

He said: ‘I think the Government is chancing its arm because the last time it tried something like this was the 1970s.

‘It’s worse than a sin, it’s a mistake, because they’re likely to get a bloody nose like they did back then.’

Fire Brigades Union general secretary Matt Wrack said: ‘The protest at Downing Street is the start of a mass movement of resistance to this pernicious attack on the rights of working people to defend their jobs, wages and conditions against attacks from their bosses or cutbacks from the Government.

‘The Prime Minister is seeking to steamroller extremely severe restrictions on the right to strike through Parliament today, without any meaningful scrutiny.’

He added: ‘Instead of launching draconian attacks on the rights of working people, the Prime Minister must provide the resources to resolve this dispute by paying firefighters and other workers a decent wage, to alleviate in-work poverty.’

While the protest was unfolding, Shapps was arguing just a few hundred meters away in the House of Commons that regulations are needed so unions and employers guarantee minimum service levels during strikes in sectors such as health care, rail, firefighting and education.

Those levels should be set in keeping with the ‘risks to public safety and the impact on daily life’ of eventual strikes in each sector, he said.

Shapps said the so-called Bill provides ‘a common sense safety net’ that will keep the public safe and ease anxiety triggered by a slew of job actions staged amid a soaring cost of living.

‘Failing to support this bill today means that members who oppose this legislation are essentially prepared to put the safety and welfare of their own constituents at risk,’ he argued.

But Labour’s deputy leader, Angela Rayner, slammed the bill in Parliament as irrational and insulting and a ‘vindictive assault on the basic freedoms of British working people.’

The bill cleared an initial stage in the House of Commons on Monday when it was approved by a vote of 309-249.