Theresa May has been warned after she sensationally sacked Gavin Williamson over claims he was behind the Huawei leak – with the former defence secretary saying he vehemently denies being involved in a letter responding to the Prime Minister. Mrs May’s former advisor, Joey Jones, claimed Mr Williamson is a “dangerous person to not have onside”, during an interview with BBC’s Radio 5 Live. Mr Jones also claimed that Mr Williamson “knows where the bodies are buried” and would be “plotting” his next move.

He said: “He is a dangerous person not to have onside, Gavin Williamson, who has been around the entrails of politics right at the heart of it for a long time.

“He was David Cameron’s PPS, then he came on board to support Theresa May’s leadership campaign, right at the heart of that. Then he was chief whip as well.

“So he does, metaphorically, as they say, he knows where the bodies are buried.

“He is somebody who has not just made friends, obviously in the parliamentary party over that period, that’s par for the course. 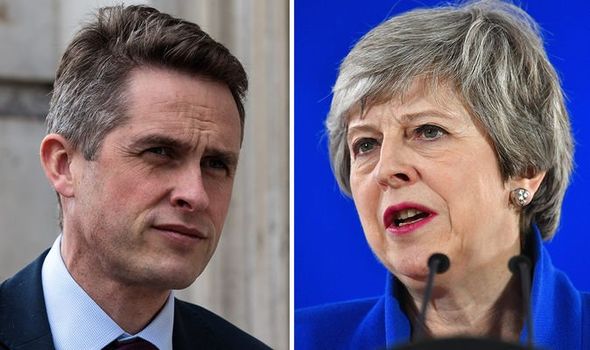 He is a dangerous person not to have onside, Gavin Williamson

“So there are certainly some people who are not unhappy within his own party to see him go.”

He added: “But, he will be plotting his next move and considering what he can do to try to rehabilitate himself, based on what we have heard from him so far.”

On Wednesday the Prime Minister sacked the former defence secretary stating there was “no other, credible version of events” other than to hold him responsible.

A Number 10 spokesman said: “The Prime Minister has this evening asked Gavin Williamson to leave the Government, having lost confidence in his ability to serve in the role of Defence Secretary and as a member of her cabinet.

“The Prime Minister’s decision has been informed by his conduct surrounding an investigation into the circumstances of the unauthorised disclosure of information from a meeting of the National Security Council.

“The Prime Minister thanks all members of the National Security Council for their full cooperation and candour during the investigation and considers the matter closed.”

The inquiry by Cabinet Secretary Sir Mark Sedwill was launched after information from secret discussions about Chinese telecoms firm Huawei’s involvement in the development of the UK’s 5G mobile network was printed in the Daily Telegraph.

In response to the sacking, Mr Williamson said: “I am sorry you feel recent leaks from the National Security Council originated in my Department.

“I emphatically believe this was not the case. I strenuously deny that I was in any way involved in this leak and I am confident that a thorough and formal inquiry would have vindicated my position.

“I have always trusted my civil servants, military advisers and staff. I believe the assurances they have given me.”