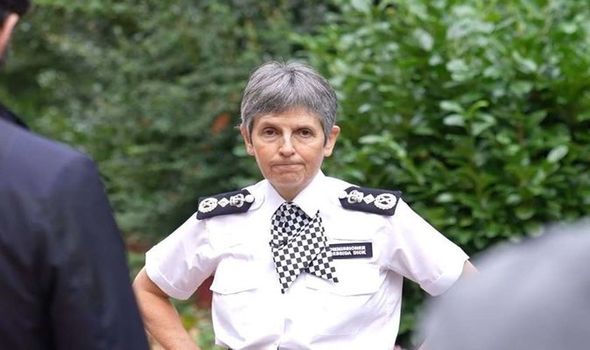 The Home Secretary has recently come under fire by controversially reappointing Metropolitan Police chief Cressida Dick for another two years despite severe criticism over her tenure at the top of Britain’s biggest force after completing her initial five year term.

Dame Cressida has recently come under attack for failures around the assault and murder of Sarah Everard in London which was carried out by police officer Wayne Couzens.

Couzens had a number of roles with the Met including guarding Parliament which has led to the Speaker Sir Lindsay Hoyle asking questions about how officers are vetted.

Prior to that Dame Cressida’s failure to tackle the extinction rebellion and Black Lives Matters leftwing protesters while problems like knife crime have risen in the capital have led to questions about her leadership.

But a source close to Ms Patel said: “The trouble was there was nobody else. If there had been an alternative don’t you think we would have taken it?

“There was nobody better. There is a real issue of who is getting promoted in the police and how it is happening.”

The source added: “It is clear there has been no succession planning at the Metropolitan Police.”

However, Conservative backbenchers have not accepted the explanation and want Dame Cressida removed quickly.

One member of the influential Common Sense group said: “We have been told this same line in meetings with the Home Secretary, but we just don’t believe it.

“Cressida Dick has been a disaster and continues to be a disaster. It is hard to believe that there is nobody better to take over from her.”

It is understood that the Home Secretary, who has already ploughed record funding into the police, recruiting 20,000 extra officers, now plans to bring in major changes to how officers are promoted and trained.

She is understood to be concerned about a lack of talent at the top and would like a structure where people can come in from other professions and industries and move into management roles.

“We have to be in a position where we can have the best people running the police force,” a senior source said.

Government sources have also raised questions about the size and dual roles of the Metropolitan Police Force which polices London but also has national security duties as well as wider powers on tackling organised crime.

Changes could see it “split up into a London and national force” according to one minister.

Plans on restructuring policing in the UK are expected to be published early next year.