Home » Europe » Temperature may pass highest on record in France

Temperature may pass highest on record in France 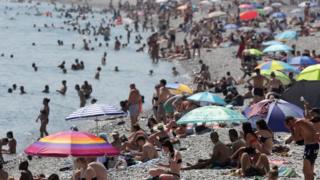 France may hit its highest-ever recorded temperature on Friday in a heatwave that has swept across Europe this week.

In response, France’s national weather service has issued an unprecedented red alert warning for four regions in the south.

Most of the country remains on orange alert, the second-highest level.

Swathes of the continent are experiencing extreme heat. Germany, France, Poland and the Czech Republic have all recorded their highest-ever June temperatures, and in Spain firefighters are battling Catalonia’s worst wildfires in 20 years. 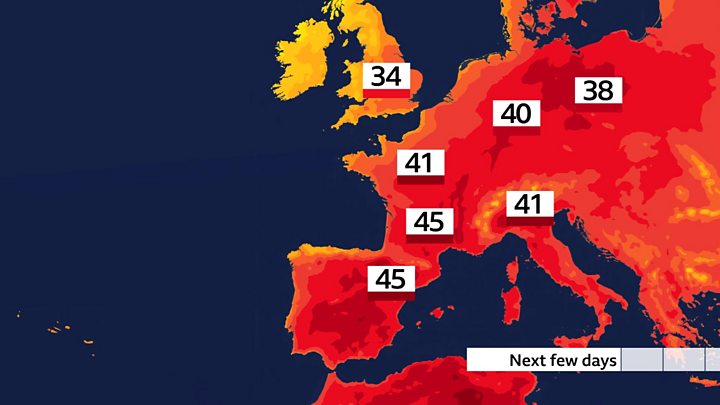 Meteorologists say hot air drawn in from northern Africa is responsible, caused by high pressure over central Europe and a storm stalling over the Atlantic.

In southern France, areas of Gard, Vaucluse, Herault and Bouches-du-Rhone are expected to see temperatures between 42C and 45C on Friday.

French authorities have stepped up restrictions on water use to combat the heatwave’s effects, while hundreds of schools have been closed.

In a TV interview, health minister Agnès Buzyn said she was concerned about the increase in calls to emergency service numbers as a result of the heatwave.

She called on members of the public to avoid “risky behaviour” like leaving children in cars or jogging outside in the middle of the day.

Is climate change to blame?

Linking a single event to global warming is complicated.

While extreme weather events like heatwaves occur naturally, experts say these will happen more often because of climate change.

Records going back to the late 19th Century show that the average temperature of the Earth’s surface has increased by about one degree since industrialisation.

A climatology institute in Potsdam, Germany, says Europe’s five hottest summers since 1500 have all been in the 21st Century.

Scientists are concerned that rapid warming linked to use of fossil fuels has serious implications for the stability of the planet’s climate.