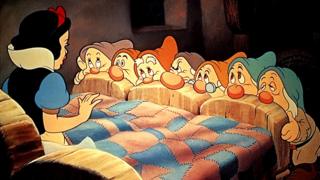 Once upon a time a museum in a charming old German town was given a very important, long-lost gravestone.

It was that of Maria Sophia von Erthal, a baroness who is believed to have inspired the Brothers Grimm to write Snow White and the Seven Dwarfs.

Her restored gravestone has just gone on display at the Diocesan Museum in Bamberg, southern Germany. It was donated by a family who had rescued it.

“The story of Sophia’s life was well known at the start of the 19th Century,” museum director Holger Kempkens told the BBC.

The Snow White fairy tale, by Jacob and Wilhelm Grimm, was published in 1812 and reached global audiences when Walt Disney created the animated film in 1937, but there have been many other adaptations.

“The Brothers Grimm made literature out of the stories they heard from local people,” Mr Kempkens said.

“There are indications – though we cannot prove it for sure – that Sophia was the model for Snow White. Today when you make a film about a historic person there is also fiction in it. So in this case I think there is a historic basis, but there are also fictional elements.”

The much-loved Snow White tale has some famous elements:

The Brothers Grimm lived for a long time near Hanau, which is just 50km from Lohr am Main.

In the 1980s a local historian in Lohr, Dr Karlheinz Bartels, researched parallels between Sophia’s life and the fairy tale, called Schneewittchen in German:

Some significant parts of the tale were not derived from Sophia’s life: the glass coffin (despite her father’s glass business); the poisoned apple; the saviour prince.

Sophia’s life did not have such a happy ending: she went blind in her youth and died unmarried in a convent, aged 71.

Mr Kempkens said the marble gravestone had a coating of chalk concealing the inscription, so it required careful restoration. The inscription says: “The noble heroine of Christianity: here she rests after the victory of Faith, ready for transfigured resurrection.”

It is also historically significant because at that time women did not usually get their own gravestones.

Sophia’s gravestone was originally in an old church in Bamberg which was knocked down, Mr Kempkens said.

The gravestone was then installed in a hospital, founded by a brother of Sophia. When a new clinic was built there in the 1970s the gravestone was removed and kept by a local family, who later donated it to the Bamberg museum.

Royal warning: ‘Prince Andrew should be seen as little as possible’ – expert

Brexit POLL: As EU plays hardball, should UK walk away from negotiations in September?