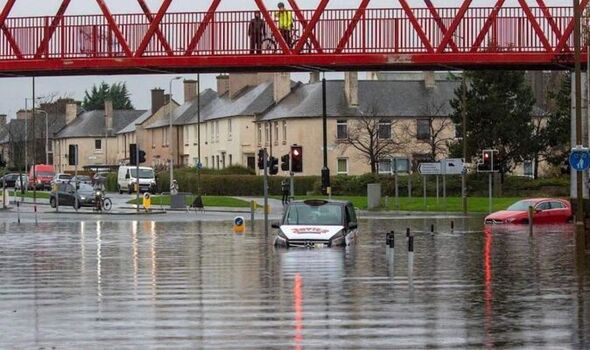 The Met Office has placed Northern England and Scotland on high alert for “life-threatening” floods as the country goes through continued heavy rainfall. It comes as an amber rain warning has been put in place for Aberdeenshire in Scotland with flood warnings and a potential “danger to life” until 3pm.

Yellow rain warnings had been in place until 7am this morning across Yorkshire.

“We have very strong onshore winds and very large waves,” he added.

“There may be some disruption to transport, including ferries and the road network.”

He added that yellow warning areas would also see some potential flooding.

The Met Office tweeted that over half a month’s rainfall had hit some areas within the past day, with the heaviest downpours in Low Laithes, West Yorkshire (53mm in 24 hours), followed by Tealby in Lincolnshire (50mm in 24 hours).

The forecaster reiterated that weather would return to more typical autumn temperatures, floating around six to 11 degrees celsius.

Turning to the weekend, Mr Morgan said the weather would be “clear” with a chance of snow.

“It stays quite clear over the weekend,” he said.

“We may see the first snowflakes of autumn over high ground and in the Scottish hills and the Pennines.”

It follows the announcement that England fans could expect to deal with unsettling weather during the team’s first World Cup match against Iran on Monday.

“There is more uncertainty than usual after Sunday,” Mr Morgan said.

“It will probably be pretty unsettled, with some rain at times and possibly quite windy as well.”

Network Rail Scotland decided to impose speed restrictions on some routes for safety reasons yesterday, a move that ScotRail says will cause journeys to take longer than normal.

Chaos on the roads meant many commuters were unable to reach their workplaces yesterday.

Trains were delayed after flooding stopped them on the tracks, while some major roads were left shut due to the amount of standing water.

The Met Office warned that some areas could see almost six inches of rain in the coming 24 hours, as the “atrocious” weather looks set to continue.