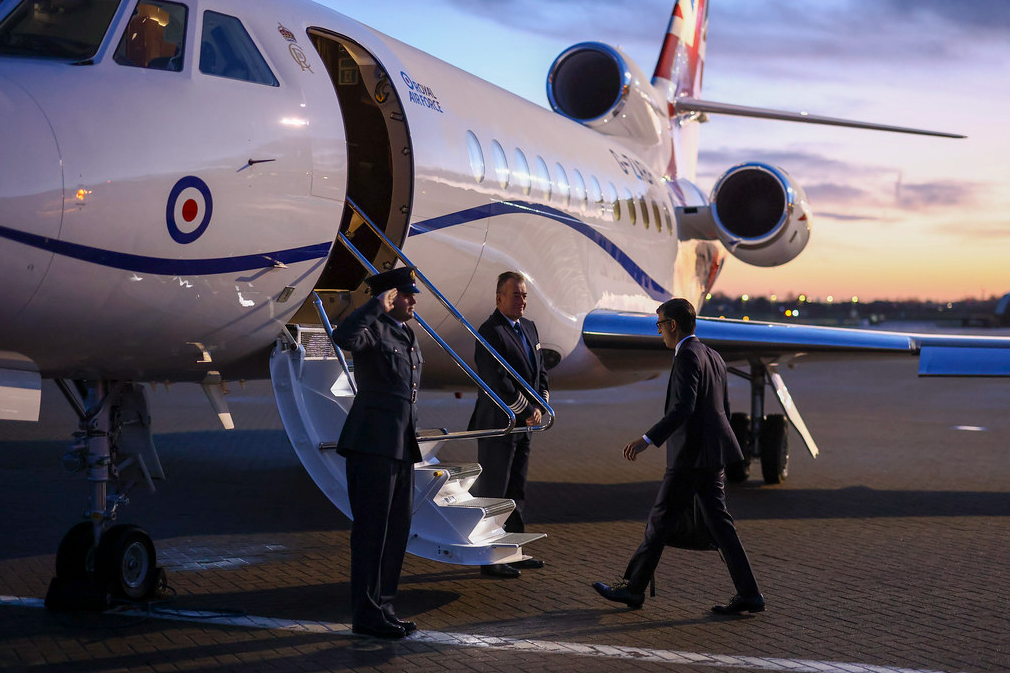 Rishi Sunak is under fire for taking yet another taxpayer-funded private jet flight to promote levelling up – as a Tory MP admitted using Britain’s ‘unreliable’ train service instead would be madness.

Last Friday, he used the 14-seater RAF plane to launch two new freeports in Scotland. On January 9, he flew in it to Leeds for a social care announcement.

Critics said the trips wasted money and made a mockery of his government’s jet zero strategy pledge to cut pollution from flights to help achieve net zero emissions in the UK by 2050.

Hiring the French-built Dassault Falcon 900LX commercially could cost more than £2,500 an hour.

By car, the trip would take around four and a half hours. A train from London Euston to Blackpool takes just under three hours, with a single fare at £73.40, or £189.80 during peak time. First class could cost £257.

But passengers on the 7.16am he could have taken arrived 14 minutes late yesterday. Only 38.8 per cent of operator Avanti West Coast’s trains were on time from July to September.

But Labour’s deputy leader Angela Rayner said: ‘His expensive private jet habit is costing the environment and taxpayer dear. He’s swanning around like a washed-up A-lister courtesy of the public, making a mockery of his own government’s “zero-jet” strategy.’

Lib Dem deputy leader Daisy Cooper said: ‘It’s simply ridiculous he can’t get a train like the rest of the British public.’

In Morecambe, the PM told reporters: ‘I travel around so I can do lots of things in one day. I’m not travelling around just for my own enjoyment – though this is very enjoyable, of course.

‘I’m travelling around so I can talk to people in Accrington this morning, then I’ve talked to you, then I’m going to get over to Hartlepool because I’m working on all of your behalves.

‘Trust me, I’m working as hard as I can to deliver for you and I travel to make myself as effective as possible.’

Mr Sunak’s spokesman said he did not know when the PM last used a train.

Locals also questioned Mr Sunak’s use of Blackpool airport, closed for holiday flights since 2014. Campaigners want it reopened but the council has raised doubts for its financial viability.

Even on the road, Mr Sunak opened himself to criticism by not wearing a seatbelt as he made a video while being driven on his tour yesterday.

It is a criminal offence punishable by a fine of up to £500.

Mr Sunak last night apologised for a ‘brief error of judgment’. He ‘fully accepts this was a mistake and apologises’, his spokesman added. ‘The prime minister believes everyone should wear a seatbelt.’ As chancellor, Mr Sunak was fined £50 in 2022 for breaking Covid lockdown rules at ex-PM Boris Johnson’s birthday do in No.10.

‘Rishi Sunak doesn’t know how to manage a seatbelt, his debit card, a train service, the economy, this country,’ a spokeswoman said.

Text the word VIEWS followed by your comment, name and where you live to 65700. Standard network charges apply.