Home » Europe » REAL reason the Queen made THIS ‘significant’ trip to Somerset – ‘Symbol of stability!’

REAL reason the Queen made THIS ‘significant’ trip to Somerset – ‘Symbol of stability!’

The Queen visited Somerset on an official visit on Thursday with a royal expert claiming the timing of the trip was “significant”. Sky News’ royal correspondent Rhiannon Mills claimed the trip would have been planned four or five months in advance and was set to be the date before the UK was officially due to leave the European Union. Ms Mills claimed the visit showed the Queen was “out there that she is seen as that symbol of stability”.

She said: “These kind of away days as the Royal Family describe them, are becoming increasingly rare for the Queen which does make them more special, of course, as she gets older.

“The last time she came to Somerset was in 2012 and the crowds have come out to see her.

“Of course, it might have been a nice bit of downtime for the Queen, she is always on official work and it was only last night she had her weekly catch up with Theresa May.

“Brexit is not far from anyone’s minds at the moment I think that is why the time of today’s visit was so important.” 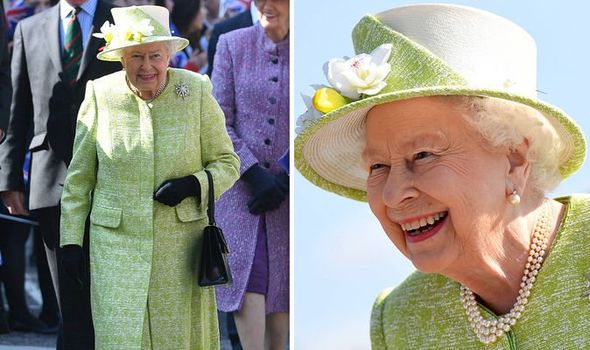 When they were planning it, tomorrow was due to be the day that we leave the European Union

She added: “This visit would have been in the diary for four to five months maybe, they always plan the Queen’s diary well in advance. And, of course, when they were planning it, tomorrow was due to be the day that we leave the European Union.

“All the shenanigans in Westminster has changed all that, but I think it does reinforce that for some people it is always important to make sure that the monarch is out there that she is seen as that symbol of stability.

“Certainly from people that I have been speaking to today, they have been talking about how remarkable she is, at 92-years-old still there, still at the centre of national life.

“I think we shouldn’t really underestimate how significant it is that she is once again out and about as we continue to see those difficulties around Brexit.”

The UK was officially scheduled to leave the European Union on March 29, but depending on whether the Prime Minister can receive support for her delay, Britain’s departure from the bloc could be delayed until May 22.

If Mrs May’s deal is voted down, the UK will have until April 12 when Britain will then have to outline its next steps to the EU, which could result in a longer extension.

The last time the Queen visited Avon and Somerset was in 2012 as part of the Jubilee Tour.

The Queen also visited Manor Farm Stables Yard to meet students from the University of Bath who are working on research projects on equestrian sport spinal injuries and racehorse welfare.

During the visit the Queen was filmed feeding carrots to racehorses, before visiting visited King’s Bruton, a co-educational school founded in 1519, to mark 500 years of the school, and officially opened the new music centre.

Before leaving, the Queen also formally named a new Avon and Somerset Police horse and met police horse Jubilee – the horse that she named during her last visit to Somerset in 2012.