Dramatic footage captures the moment a squadron of Russian fighter jets ‘buzzed’ a British naval warship in a threatening manoeuvre.

The trio of bombers – including at least two SU-24 warplanes – could be seen darting towards the HMS Queen Elizabeth as the warship made its way towards the Suez Canal, prompting the crew to scramble its own F-35 stealth fighters to confront them.

The £3.2 billion HMS Queen Elizabeth, nicknamed ‘Big Lizzie’, is the UK’s biggest ever warship, along with its sister craft the HMS Prince of Wales.

The incredible scenes were captured in June 2021 during the Queen Elizabeth’s first operational mission, and have been revealed today ahead of a BBC documentary charting the ship’s seven-month deployment to the Far East.

In the clip, three Russian planes were spotted tearing towards the ship after being deployed from a nearby base in Syria, almost triggering a diplomatic incident.

As the aircraft close in at 7,000ft one of the crew warns ‘I’ve got three Russian jets at six miles’ while another says: ‘Visual. Roger. Three Russian aircraft coming in.’

This prompts the crew to quickly man their stations, and issue a warning to the aircraft that they risk being shot down.

‘This is a coalition warship. Your actions appear to be threatening. Turn away immediately or I may take action against you,’ a naval officer warns over the radio. 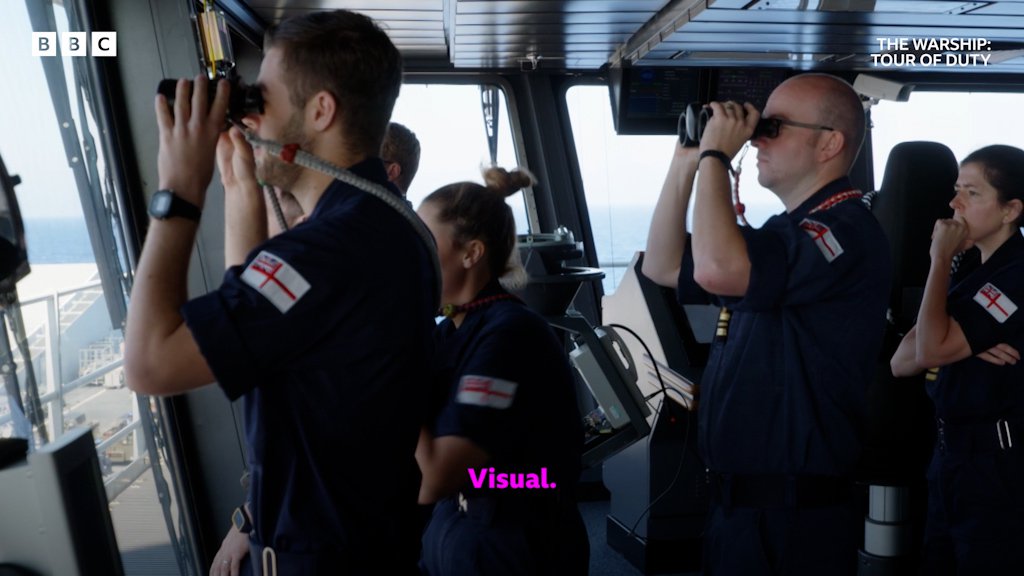 In the command room, another officer says: ‘Warnings have been read following hail from Queen Elizabeth, no response to the warnings this time, aircraft continuing to close.’

The crew are met with no response from the Russian pilots, who tear over the top of the craft before flying away.

At the time of the drama, F-35 stealth jets stationed onboard the Queen Elizabeth had been carrying out strike missions in the Middle East against Isis terrorists.

During the build-up to the confrontation, it was thought a Russian frigate had been attempting to ‘block’ the aircraft carrier and stop the ship from launching her jets.

The incident was one of a series of encounters the Royal Navy had with Russian Forces during its deployment.

‘It was frequent. It wasn’t daily. But they were frequent,’ a defence source told the Mail.

A Royal Navy spokesperson added: ‘HMS Queen Elizabeth and her multinational taskforce were routinely approached by maritime and airborne forces throughout the successful Carrier Strike Group deployment in 2021.

‘As ever, robust measures were in place to protect the group, including an Astute Class submarine and, where necessary and appropriate, routine challenges were issued.’

The Warship: Tour of Duty is on BBC Two and iPlayer and starts on Sunday, January 22 at 9pm.