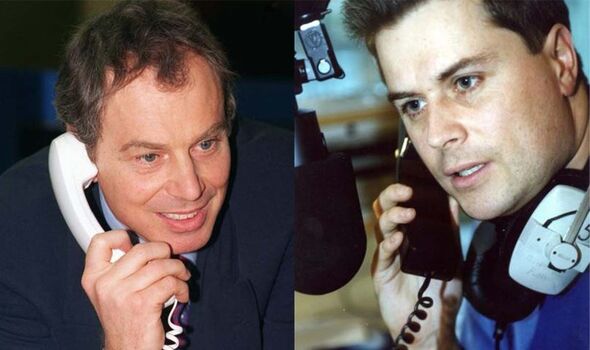 Twenty-five years ago this week a DJ who was renowned for his hoax calls pulled off his biggest-ever prank. At 8.20am, a Downing Street receptionist transferred DJ Steve Penk’s call through to Tony Blair.

By 10pm that night the radio presenter and professional wind-up merchant was the lead story on every news channel.

Steve Penk had made a career out of being a wind-up merchant, writes the Manchester Evening News. His greatest hits included applying for a job at a bookies pretending to be a man called Ben Dewire, booking a room at the Ritz in Paris while quoting a string of U2 song titles and convincing a woman the council was building a bus stop outside her house.

However, on January 21, 1998, Steve was planning his most audacious stunt yet. A few years earlier, while working at Key 103 in Manchester, he’d called Downing Street pretending to be a member of the public and asked to speak to John Major to complain about the price of onions in his local supermarket. On that occasion, he’d got no further than the suspicious woman on the switchboard. Now working for Capital FM in London Steve wanted to try again, and this time he hoped to get right to the top.

“The idea was to see how far I could get through the security phone system of Number 10 and my thought was, for my listeners that would be the interesting and entertaining part of the call, little did I know what was about to happen,” said Steve.

He enlisted to help of then-unknown impressionist Jon Culshaw. The plan was for Jon to pretend to be Conservative Party leader William Hague calling to speak to Tony Blair. Remarkably, from the station’s studio in Leicester Square, they pulled it off.

“I rang directory enquiries to get the number for 10 Downing Street, rang the number and the switchboard answered, at this point, Jon launched into the voice of William Hague asking to speak to Tony,” said Steve. “She put us through immediately to Tony Blair’s PA who at first wasn’t quite sure, saying it didn’t sound like him, but after a few more lines of dialogue, confirmed that she was convinced it was William Hague she was talking to and would go and fetch the Prime Minister. During this brief moment, I closed the microphone and told Jon, he was almost certainly about to talk to the Prime Minister and to be prepared, 30 seconds later a very familiar voice said ‘Hello’… it was Tony Blair.

“Jon’s face was a picture, I will never forget that look of total shock in his eyes, he literally started to sweat. The conversation with Blair lasted less than 60 seconds and ended when security who were monitoring the Prime Minister’s calls in a separate office, pulled the plug.”

Steve was elated but now had a dilemma. Did he tell his boss he’d just prank-called the most powerful man in Britain and risk it not being used, or did he just run the piece regardless?

“This wasn’t some local builder or housewife, this was the British Prime Minister, one of the most powerful people in the world and I had just wound him up,” said Steve. “I didn’t know him, I didn’t know if the man had a sense of humour, or if that morning something world-threatening was going on, and here I was trivialising his day.”

At 11.30am he broadcast the wind-up – and initially, nothing happened. There were no comments from his bosses at the station, no angry call from Downing Street. At 1pm he finished his show and began preparing for the following day. Then, everything went crazy.

At Prime Minister’s Questions, Tony Blair mentioned he’d been the subject of the wind-up, joking it had made more sense than anything William Hague had said that day in the House Of Commons.

“Suddenly I had every single newspaper, radio station, TV station in the world wanting to talk to me,” said Steve. “It was the craziest 24 hours of my professional life, it made Capital Radio even bigger, it took the heat off Tony Blair, who at the time was under intense political pressure, it made Jon Culshaw famous and gave him that big break he was looking for, and it made me into troublemaker number one and for a moment, the most famous radio presenter in the world.”

Steve says a few weeks later the PM’s office got in touch with Capital saying his children were big fans of the station asked if they could come in for tour. Steve met Euan Blair that day and years later he says the PM’s son got back in touch via LinkedIn to thank him for the tour and to say his dad loved the wind-up.

Spin doctor Alistair Campbell also later mentioned it in his diaries. Rusholme-born Steve, who now has an afternoon show on Manchester-based Happy Radio, says to this day people still approach him to talk about the prank.

“I still get it all the time. I’m a big City fan and still come up me at games saying ‘Penky, I loved the wind-ups’.

“When you do this for a living, you try your best to entertain people. And if you’re lucky you get a moment like that.”