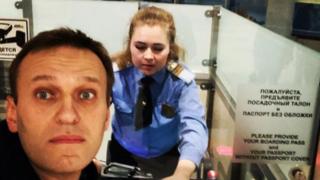 Mr Navalny had filed a complaint with the European Court of Human Rights in Strasbourg and was there to hear the ruling on Thursday.

The court found that his seven arrests between 2012 and 2014 had been aimed at “suppressing political pluralism”.

Since then, police have arrested him several times again under protest laws.

“We’ve won,” he tweeted after the verdict. “Completely. The government has been thrashed. They recognised Article 18 [of the European Convention on Human Rights]. Hurray!”

Under Article 18, citizens’ rights and freedoms may not be restricted for political purposes.

Mr Navalny arrived in Strasbourg after initially being refused permission to leave Russia over a court fine.

Since leading mass protests in Moscow in 2011-12, he has campaigned against corruption under President Vladimir Putin, and has embraced political causes such as opposition to the raising of the retirement age.

He has been barred from standing for political office because of a conviction for embezzlement which he says was trumped up.

What does the ruling mean?

The court found that Mr Navalny’s allegation that he had become a “particular target” “appeared “coherent in the context of a general move to bring the opposition under control”.

“It is a very clear judgment,” Mr Navalny was quoted as saying by AFP news agency after the ruling.

“The European court recognises that it was a politically motivated arrest and persecution. It was very important not just for me but for other people all over Russia who are arrested every day.”

Will Russia heed the court?

The ECHR’s role is to rule on alleged violations of the European Convention on Human Rights, which Russia ratified in 1998 when it joined the Council of Europe, an organisation which upholds the rule of law in Europe.

However, Russia has taken issue with previous ECHR verdicts such as one in 2014 which ordered Moscow to pay compensation to shareholders in the defunct Russian oil firm, Yukos.

In 2015, the Russian parliament passed a law allowing the country’s Constitutional Court to overrule ECHR judgements.

How often has Navalny been arrested?

He has spent a total of 172 days in jail, an unnamed spokeswoman was quoted as saying by AFP news agency. Usually he is held for a few weeks or made to pay a fine.

In addition to the seven arrests detailed by the ECHR, Mr Navalny was detained at least four times this year:

In 2013, he was convicted of embezzlement involving a state-run timber company, Kirovles, and given a suspended prison sentence of five years. The verdict was upheld at a retrial last year.

The ECHR found the original Kirovles trial had been based on “arbitrary interpretation of the law”, and Mr Navalny insists the case was fabricated in order to keep him out of politics.

As a result of the case, he was placed under house arrest for a period of time.

The court fine he had to pay this week, which amounted to 2.165m roubles (£24,600; $32,000), related to the Kirovles case. He said the fine had been deliberately enforced to stop him leaving Russia.