Puppy farms horror: ‘The situation is out of ­control’ – rescue worker’s stark warning

WHEN dog rescue worker Eileen Jones handed over Jack Russell cross Dilyn to the Prime Minister’s partner Carrie Symonds she hoped the ­publicity would be another nail in the coffin of cruel puppy farms – even the occupants of No10 were rehoming a needy pet. Her optimism was boosted further when, with Boris Johnson’s backing, Lucy’s Law outlawed third-party puppy sales last April. It forced people to buy directly from breeders – who are obliged to show puppies with their mothers – or adopt from rescue centres. The new law was supposed to prevent the scandal of ­unscrupulous dealers forcing exhausted bitches to produce litter after litter in filthy sheds – threatening six months in jail or unlimited fines for offenders.

But now Eileen realises the battle is not yet over. Because the Welsh government has failed to implement Lucy’s Law – allowing the owners of cruel “puppy farms” based there to flood the rest of Britain with animals bred in horrifying conditions.

“Unfortunately the situation is out of ­control with dogs and puppies enduring appalling suffering,” said Eileen from the South Wales rescue centre whuch rehomed Dilyn.

The demand for puppies soared in lockdown as people working from home or on furlough sought canine companions, ­driving up prices and fuelling the cruel trade. Dodgy puppy farmers have stepped up breeding to meet the demand.

Incredibly, the Welsh government is still delaying Lucy’s Law, so there is nothing to stop disreputable breeders there selling puppies to third-party traders taking them across the UK to cash in on the Covid-19 induced puppy bonanza.

Eileen recounts a recent conversation with a dog breeder in Wales who occasionally passes on rejected dogs for her rescue centre.

“He told me I can forget about picking up dogs now because they’ll be breeding from everything with a heartbeat,” she said. “Those were his exact words. They anticipate that the demand for puppies is going to continue up to and way past Christmas. 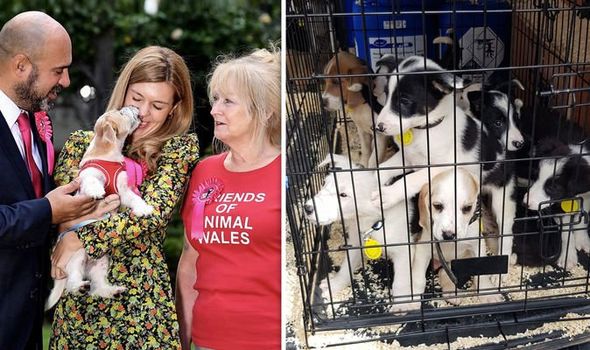 “What is incredibly frustrating is if the Welsh government had implemented Lucy’s Law, it would have stopped the ones selling to puppy dealers.

“We know puppies are being sold in ­service stations on the M4 and in ­supermarket car parks, which is exactly what the law is trying to stop.”

Inevitably, many families discover too late their new puppy turns out to have serious, and sometimes fatal, health problems.

Anna Webb, dog behaviour expert and co-host of BBC Radio London’s Barking Hour, said: “Apart from fuelling the cruel puppy farming trade, this ‘puppy love’ craze through lockdown has been exploited by unscrupulous breeders. With impulse purchases, I fear rescue centres will be flooded with unwanted pups once furlough ends.”

She is also worried that pets bought by ­private tenants may become homeless when landlords discover breaches of tenancy agreements.

Gabby Kuehn, 49, who set up the ­campaigning group Pets Are Always Welcome House, fears many people who bought ­puppies in lockdown could now face eviction.

She said: “We want the Government to introduce legislation that stops blanket pet bans while balancing the needs of all tenants. It would be a crying shame if puppies purchased during lockdown had to be given away to rescue centres because of a lack of tolerance.”

And while many people saddled with sick puppies spend a fortune on vets, others just dump them.

Eileen Jones recalls a call from a vet in the Crewe area asking for her help after a puppy was found abandoned. “We assume somebody bought him and then realised he had eye problems and dumped him,” says Eileen. “Sadly, his eyes could not be saved, which was heartbreaking.

“He was cared for in one of our wonderful foster homes. He’s been adopted now. They’ve called him Pickle and he’s doing well, but it has been very traumatic.”

Because of the huge demand, Eileen faces a new dilemma when dogs she rescues are offered for adoption.

“If we put a dog up for adoption we get 300 to 400 applications,” she says. “We dread the process now because it has become such a mammoth task. It’s like a kind of madness.

“Suddenly everyone has to have one. I’ve even known of people offering deposits on puppies before they’ve even been conceived. It is absolutely bonkers.”

Her spirits are, however, lifted when Carrie Symonds sends over photos of Dilyn, who is clearly thriving in his new home at Downing Street. And she was delighted to see him looking a picture of health on holiday in Scotland with his new family. “A wonky puppy farm survivor living at Number 10 shows the world rescue dogs are not second best,” she says.

“Carrie is very supportive of animal welfare. I’m hopeful she will have an impact on some of the policies being brought forward. But I know hundreds of bitches in awful puppy farms across Wales are still being forced to produce litters when they are exhausted, old and should not be breeding.

“Soon those puppies will be put up for sale and will be taken anywhere in England. It is heartbreaking. Children looking forward to having a puppy will be traumatised when it falls sick, or worse dies.

“This terrible cycle of suffering, death and heartache will go on until the politicians here in Wales get their act together.

“We might as well have a big sign on the border saying ‘Welcome to the puppy farm capital of the UK’.”

Brighton-based vet Marc Abraham, who campaigned for Lucy’s Law (named after a spaniel almost bred to death on a puppy farm five years ago), visited Downing Street with Eileen and Dilyn. He is frustrated at how the law passed in England last April has been diluted by the pandemic because the protections were relaxed.

Marc says: “The law states buyers have to physically see the puppy with its mother, but because of concerns over transmission of Covid, puppies could temporarily be ­delivered to people’s homes.

“Some of them were half dead when they arrived, which was extremely distressing.”

“This route bypasses any scrutiny and goes against the spirit of Lucy’s Law, but it is legal,” says Marc. “There is no way UK ­animal inspectors can travel to Russia to see how these puppies are reared.”

Marc and others are now campaigning for the 15-week age limit on puppies entering the country to be increased to six months, which will stop traders smuggling under-age pups into Britain. At six months, it’s easier to discern puppies’ genuine age because ­permanent teeth are present.

They can also be tested to see if they have been given rabies vaccines, rather than relying on ­potentially forged documents.

Fast forward six months, I dread to think what the state of rescue centres will be once the novelty of a ‘new’ dog has worn off. So many inexperienced new owners have been scammed by puppy farmers, selling puppies bred in awful conditions, for a crazy amount of money.

Dog ownership should be a pleasure and a positive life changer for both owner and dog, it seems many have been short-changed.” 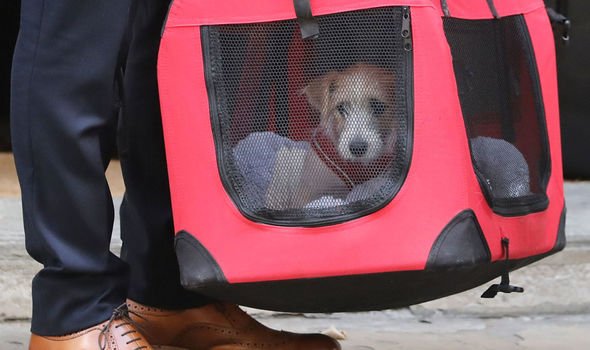 A petition on the Government’s website calling for a ban on the exploitation of young pups imported for sale in the UK attracted 111,706 signatures in its first few weeks.

The Government responded saying it works to ensure regulations protecting the welfare of transported animals are followed.

Unusually, the Petitions Committee has requested the Government revises its response. As the political wrangling continues, respectable dog breeders in England are struggling to cope with demand. Sarah Cole runs a small black labrador breeding business in Dorset and has 10 ­puppies who will soon be old enough for sale, but worries about their future.

“I get hundreds and hundreds of inquiries and it is impossible to be able to check them all out, so for the time being I’m not offering any puppies,” she says. “People have just gone crazy.” One of her fears is selling a puppy to a dealer posing as a potential owner for say, £1,250, who would then sell it on for as much as £4,000.

Dog rescue centres have also been ­inundated with offers.

The RSPCA said that between March 23 and July 19 this year its Find a Pet website section had 3,843,089 unique views compared with 1,768,131 for the same period last year, an increase of 117 per cent. Kennel Club research shows new owners admitted ­buying a puppy ­during the pandemic with little research.

One in four agreed they could have inadvertently bought through a puppy farm, 27 per cent paid money before seeing the dog and42 per cent admitted not checking the puppy’s home. It has prompted the club to launch its Be Puppy Wise campaign.

Bill Lambert, Kennel Club head of health and welfare, said: “These hasty decisions not only play into the hands of the opportunistic scammers and puppy farmers but can also sadly result in puppies being rehomed.

“By wising up, you’re actively taking steps to prevent a potentially damaging lockdown legacy for puppies across the UK.” 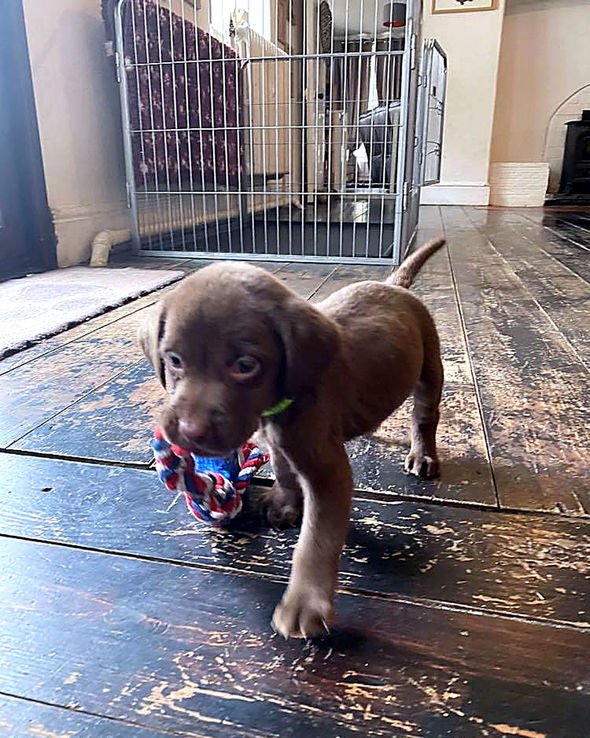 ‘Our sick pup was only four weeks old’

After the death of her beloved bulldog, teacher Kaye Teale was desperate to nd a replacement. S

he and partner Aurelijus Krudyk fell in love with an adorable chocolate labrador puppy for sale on the internet and immediately put down a £200 deposit.

But as the day approached for them to visit their new pet’s home, the Wales-based breeder started making excuses. Finally, he drove to their Brighton home to deliver the dog on May 27, when it should have been nine weeks old.

But the pup he brought was tiny, had shorter ears and different coloured eyes.

“It wasn’t the same puppy we saw in the photographs, but what could we do?” said Kaye. “We wanted to look after him so we handed over a further £800.”

Just hours later, it became apparent they had bought a very sick animal. They took the puppy, named Sawyer, to a vet who said it was probably just four weeks old and badly infected with a bacteria causing severe diarrhoea. H

e had been vaccinated and chipped by a Kennel Club registered breeder, even though he was so tiny.

“We think the vaccinations may have made him ill because he was given them too early,” she said. “Sawyer is 17 weeks old now and is still not right.

We can’t give him any processed food. Everything he eats is hand prepared. “I trusted the breeder because he’s Kennel Club-registered, but many others have had problems with this man and some people have even lost their puppies.”

The couple managed to get £500 back and have complained to trading standards officials in Wales. But, sadly, it will probably be a fraction of the vets’ bills they face to help return Sawyer to health.