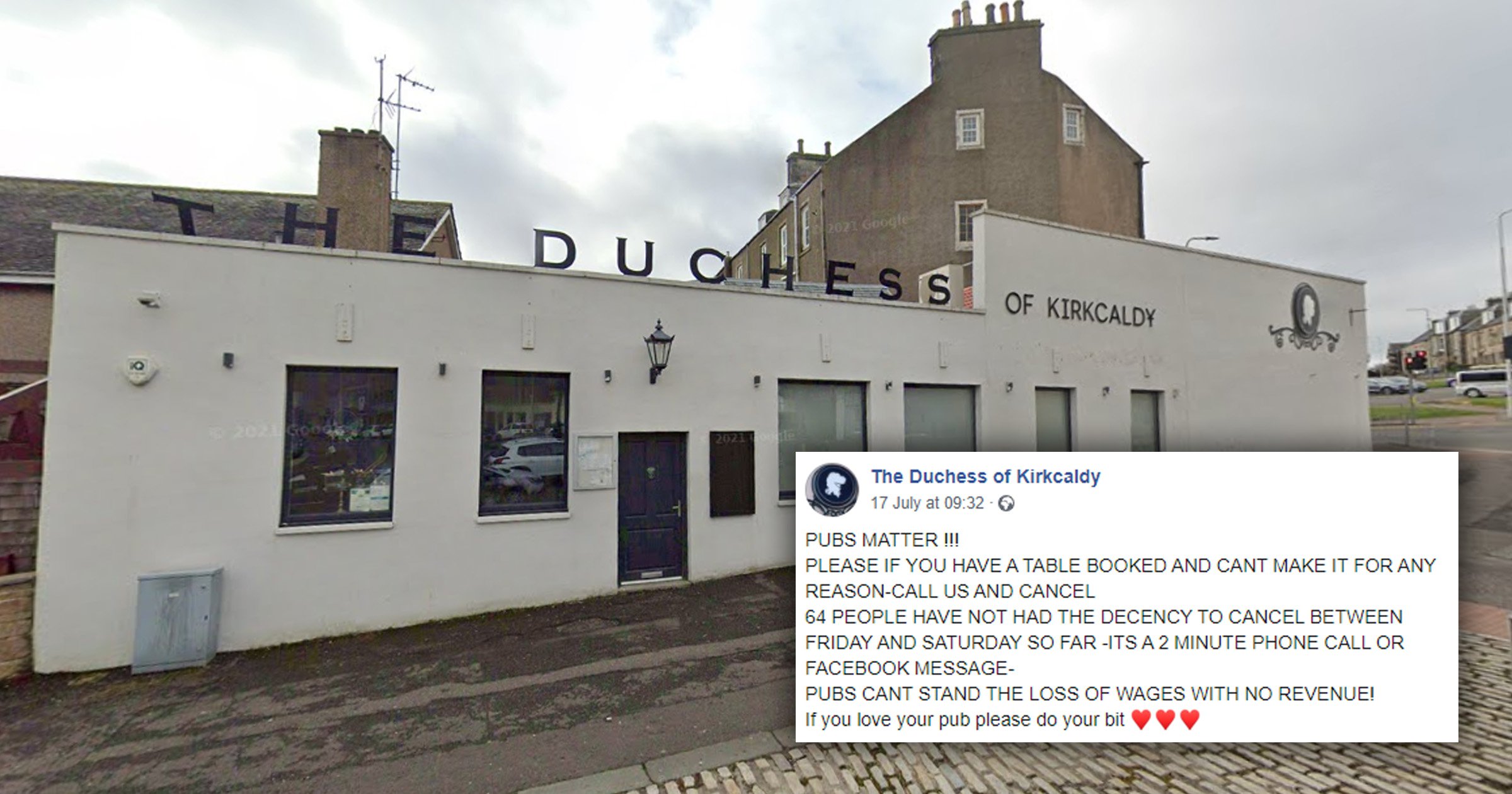 A pub boss has slammed no-show customers after she lost £5,000 worth of revenue in just two days – forcing her to start taking deposits.

Dallas Mackay, who owns The Duchess in Kirkcaldy, Fife, said 64 punters who had booked tables on Wednesday and Saturday never showed up.

None of the customers had contacted the pub to let them know they no longer needed the reserved tables, meaning staff couldn’t re-book them.

The publican said the devastating loss of business cost her between £4,000 and £5,000 after getting in extra staff to cover the parties.

It comes at a ‘really hard’ time for Ms Mackay, who was only able to open her pub for three weeks between March last year and May this year due to the pandemic and flooding.

She said punters need to understand the consequences of simply not showing up and begged people ‘if you love your pub please do your bit’ and call to cancel.

Ms Mackay said: ‘When I have called a few of them they’ve said “oh I meant to cancel” and one of them started coughing down the phone saying they had Covid, but I said they could still cancel even if that was the case.

‘It takes a second to pick up the phone but people don’t understand the repercussions.

‘On Wednesday night, we had nearly 70 covers between 5 and 7 pm.

‘I brought in extra staff in the kitchen, behind the bar, and on the floor, and then 32 people didn’t turn up.’

‘Don’t get me wrong, we did manage to fill some of the tables, but there were at least 28 people booked for drinks on Saturday who didn’t show up,’ she added.

‘I’m keeping bar staff here for parties of six and eight coming in and then people aren’t coming.

‘Many businesses have been crippled because of Covid, but people think they will be the only one not to show up so it’s okay. Staff wages still need to be paid because they are here.’

Ms Mackay said the dramatic loss in revenue has forced her to start taking £10 deposits.

The publican is one of many hospitality business owners who have desperately pleaded with customers during the pandemic to stop no-shows.

Earlier this month, one pub in Oldham, Greater Manchester, had to turn away nearly 50 customers because someone booked seven tables with false details and never showed up.

Another restaurant owner in Cardiff was devastated when 34 people didn’t call to cancel, meaning he too turned away more than 50 walk-ins.

The manager of another pub in Kirkcaldy, O’Connells, has experienced similar problems with no-shows and has also started taking deposits.

Manager Eamonn Thompson said: ‘We had approximately five to 30 no-shows on Saturday – nothing as bad as The Duchess, although it is still damaging.

‘We started taking deposits when we opened back up again after lockdown, taking a £20 deposit per table which then comes off the final bill.

‘It secures the table and it helps the customer to honour the booking.

‘We have a ladies night in August which we are taking deposits for and we have deposits for larger tables – for six or eight people.