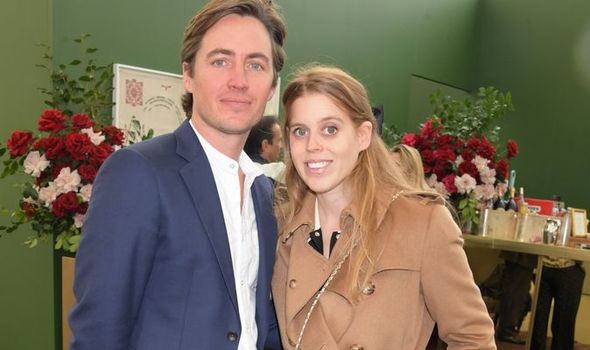 Beatrice and Edoardo Mapelli Mozzi took some time off baby duties as they visited the London Art Fair in Regent’s Park.

The royal, who welcomed daughter Sienna last month, glowed as she posed for a photo with her husband.

She styled her golden hair in a chic half-up half-down do.

Beatrice’s cousin Lady Amelia Windsor, who is 41st in line to the throne, also stepped out at the art fair.

Beatrice and Mr Mapelli Mozzi appeared to be enjoying their day out.

The couple welcomed daughter Sienna just before midnight on September 18.

The tot was born at the Chelsea and Westminster Hospital and weighed 6lb 2oz.

Beatrice is also stepmother to Mr Mapelli’s son from a previous relationship Christopher Woolf, who is known as Wolfie

At the beginning of October, Beatrice and Mr Mapelli Mozzi revealed they had named their daughter Sienna Elizabeth.

They released an image showing prints of her tiny feet.

Beatrice tweeted: “We are delighted to share that we have named our daughter Sienna Elizabeth Mapelli Mozzi.

“We are all doing well and Wolfie is the best big brother to Sienna.”

In an Instagram post, Mr Mapelli Mozzi wrote: “Our life together has just begun, and I can’t wait to see all the amazing things that await us.

“Feeling so much love and gratitude for my amazing wife, baby Sienna and Wolfie. These are the days I never want to forget. This week, a friend said to me the sweetest saying… that with every child you grow a whole new heart

“A massive thank you to the Midwife and the amazing team at the Chelsea and Westminster Hospital.”

Beatrice and Mr Mapelli Mozzi became engaged during a weekend away in Italy after a whirlwind romance.

They married in July 2020 in a secret lockdown wedding after their planned ceremony was postponed because of the pandemic.

Beatrice is the eldest daughter of Prince Andrew and Sarah Ferguson.