A rare new photograph of the Duke of Edinburgh with the Queen has been released to mark his 99th birthday.

The picture was taken on 1 June and shows the couple standing side by side in the quadrangle at Windsor Castle.

With the duke turning 99 today and the Queen now 94, they look remarkably well, both standing up unaided as the photograph is taken.

Her Majesty is wearing a yellow floral-patterned dress, designed by her stylist and dresser Angela Kelly, with the Cullinan V diamond brooch.

Prince Philip is wearing a blazer and his Household Division tie. Sky’s royal commentator Alastair Bruce said the blazer is one of the duke’s favourites for a special reason.

He said: “The Duke of Edinburgh has frequently chosen to wear his Grenadier Guards boating jacket, which is the name given to a blazer in the Household Division.

“This one is special because it was left to Prince Philip by his long-time friend Lieutenant Colonel Sir Eric Penn.

“Sir Eric had been to auctions to gather a button from every reign back to King William IV. The regiment’s button changes with every reign, as it includes the monarch’s cypher.

“When Sir Eric explained the buttons to Prince Philip, who was Colonel of the Grenadiers, His Royal Highness jokingly asked to be given it when he died. 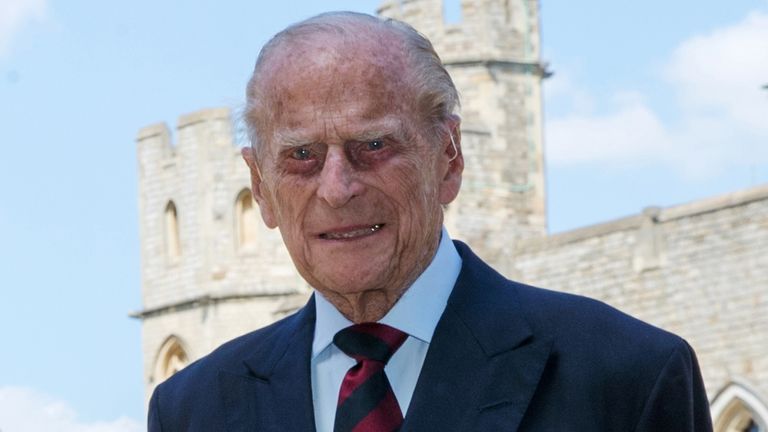 “When Sir Eric did die, his widow took the garment and a diagram showing where every button should go.

“It was a few days before the Queen’s birthday parade, much like today, and Lady Penn was received by Prince Philip who was wearing his bearskin cap and a vest.

“The prince tried it on and, apart from the sleeve length it was a perfect fit. He has worn it as a favourite ever since.”

He added: “The prince also wears the Household Division tie because he served first as a colonel with the Welsh Guards, whose year to Troop their Colour this was to be.

Trooping the Colour was due to take place this weekend but was cancelled due to coronavirus.

Buckingham Palace isn’t sharing any details of what the duke might be doing on his birthday, simply saying he is spending it privately at Windsor Castle.

The couple have been living there ever since the COVID-19 lockdown started and the current rules on social distancing will inevitably hamper any plans for family celebrations.

Last week, Prince Charles talked to Sky News about how he missed his father, saying that not seeing family was one of the hardest parts of the pandemic.

He said: “Well I haven’t seen my father for a long time. He’s going to be 99 next week, so yes, or my grandchildren or anything.

“I’ve been doing the Facetime, it’s all very well but…” And asked how he’s felt being disconnected from his family, he added: “Well it’s terribly sad, let alone one’s friends.

“But fortunately at least you can speak to them on telephones and occasionally do this sort of thing. But it isn’t the same is it. You really want to give people a hug.”

The Queen and the Duke of Edinburgh are the only royal couple to celebrate their platinum wedding anniversary, marking 70 years of marriage in 2017.

As Britain’s longest-serving consort he has carried out over 22,000 solo public engagements, but has often jokingly described himself as “the world’s most experience plaque unveiler”.

It has become increasingly rare to see Prince Philip in public, except for attending big family events, after he announced he was stepping back from public duties in 2017.

In recent years, he has spent most of his retirement living at Wood Farm on the Sandringham Estate.

The last time he was seen was in January being driven away from the estate on the day that the Queen held a family meeting about Prince Harry and Meghan‘s future.

In December, he spent four nights in hospital being treated for a pre-existing medical condition, before being allowed home on Christmas Eve.