Prince Philip has returned to King Edward VII Hospital in London, where he already spent 13 nights in February. Buckingham Palace said in a statement: “Following The Duke of Edinburgh’s successful procedure at St Bartholomew’s Hospital on Wednesday, His Royal Highness has been transferred to King Edward VII’s Hospital this morning.

“The Duke is expected to remain in hospital for continuing treatment for a number of days.”

Prince Philip was transferred from the private hospital to St Bartholomew’s Hospital on March 1, where Buckingham Palace revealed he was expected to undergo treatment and testing for a pre-existing heart condition.

Two days later, the Duke underwent heart surgery, as announced by the palace on the following day.

A statement read: “The Duke of Edinburgh yesterday underwent a successful procedure for a pre-existing heart condition at St Bartholomew’s Hospital. 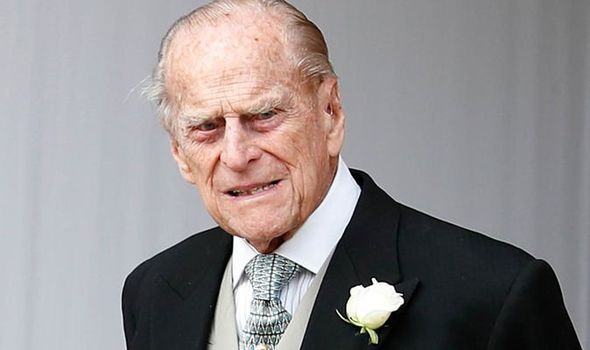 “His Royal Highness will remain in hospital for treatment, rest and recuperation for a number of days.”

Prince Philip was first admitted to hospital on February 16 out of an “abundance of caution”, as stated by royal sources.

At the time, Buckingham Palace did not say why the Duke had been taken to King Edward VII Hospital but only stated this “precautionary measure” was taken after Prince Philip felt “unwell”.

But royal fans started to be particularly concerned for the Duke after Prince Charles made a 200-mile round trip from Gloucestershire to see his father, at a time when visitors are only admitted under extreme circumstances.

Prince William provided an uplifting update during his first face-to-face engagement on February 22, when he said the Duke of Edinburgh was “ok” and doctors were “keeping an eye on him”.

On the following day, on February 23, Buckingham Palace revealed the Duke was suffering from an infection.

The palace’s statement read: “The Duke of Edinburgh remains at King Edward VII Hospital, where he is receiving medical attention for an infection.

“He is comfortable and responding to treatment but is not expected to leave hospital for several days.”

After the Duke of Cambridge, two other senior royals publicly spoke about Prince Philip’s health condition over the past few days.

During an interview focused on the Duke of Edinburgh’s Award, Prince Edward told Sky News: “As far as I’m aware, well I did speak to them the other day, so he’s a lot better thank you very much indeed, and he’s looking forward to getting out, which is the most positive thing.

“So we keep our fingers crossed.”

Asked if the Duke was frustrated at being in hospital, the Duke’s youngest son added: “Just a bit! I think that gets to all of us, and then, you can only watch the clock so many times and the walls are only so interesting.”

Camilla, Duchess of Cornwall, also provided a brief update on her father-in-law during a face-to-face visit to a vaccination centre in Croydon, south London.

Concerns for the Duke’s heart first emerged in 2011, when he was rushed to Papworth Hospital with chest pain and received treatment for a blocked artery.

The Duke has been suffering from different ailments over the past decade.

In 2012 he was forced to miss part of the Diamond Jubilee celebrations due to a bladder infection, for which he was also hospitalised in August on the same year.

In 2013 he was operated on his abdomen and remained in hospital for 11 days.

The last time he was at King Edward VII Hospital was December 2019, when Buckingham Palace said he had been admitted for treatment and observation for a pre-existing condition.