Prince Edward is the Queen’s youngest son. Upon his marriage in 1999, Edward was given a royal earldom making the couple the Earl and Sophie, Countess of Wessex. His career originally began outside of the Royal Family, but he later became a working member of the Firm alongside his wife. But what sweet reason drove the Queen to give him a new touching title in 2019.

Prince Edward is the only one of the Queen and Prince Philip’s sons who is not a Duke.

Instead, Edward is an Earl which is at odds with tradition which dictates children of the sovereign receive a dukedom on their wedding day.

Prince Edward is the youngest of the Queen’s children which means he is automatically entitled to use the HRH and Prince title.

In a statement released by the Royal Family, it was also revealed any children Sophie and Edward would bear would not receive HRH titles but instead be styled as children of an Earl.

But Prince Edward and Earl of Wessex are not the only titles given to the Queen’s youngest son.

To commemorate his 55th birthday in 2019, the Queen gave him the Earldom of Forfar in Scotland.

This Earldom was first established in the Peerage of Scotland in 1661.

But this title was extinct for more than 300 years.

The second Earl of Forfar died without an heir in 1715. 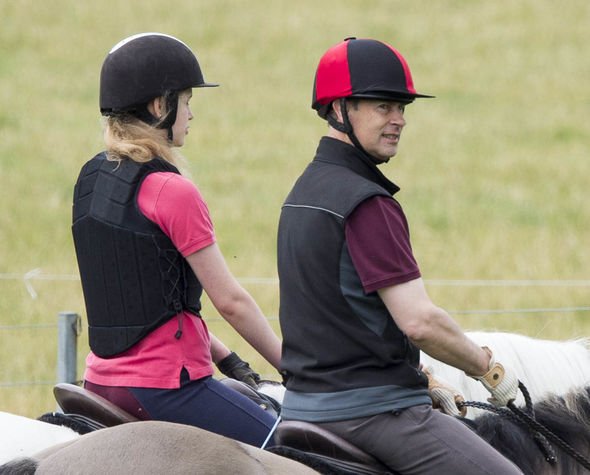 Forfar in Scotland is located 13 miles north of Dundee and is the nearest town to Glamis Castle, the seat of the Earls of Strathmore and Kinghorne.

Forfar has a population of a little more than 14,000 and is the county town of Angus.

Prince Edward and Sophie Countess of Wessex visited Forfar for their first official visit in July 2019.

This was just four months after he was given the new title in March.

When the couple visited in July 2019, Edward was presented with the Earl of Forfar tartan.

This tartan was designed to commemorate the couple’s new titles by a local company.

The weave is based on the existing Forfar tartan, which the company designed in 2004 around the colours of the Forfar coat of arms.

The Queen Mother, Prince Edward’s grandmother, was the daughter of Lord Glamis, the 14th Earl of Strathmore and Kinghorne.

Therefore the Earldom of Forfar is particularly significant to the Queen because of the connection to her mother.

Prince Edward’s grandmother, who he was said to be very close to, died in 2002, just one year before his first child was born.

The Queen Mother was the only member of the Royal Family who was exempt from the couple’s “no hat” rule mandated for their 1999 wedding.

Sophie and Edward use the title of the Earl and Countess of Forfar when in Scotland.

On the special occasion of his 55th birthday when the Queen gifted him this new title, the Royal Family posted a congratulatory comment to wish him well.

The comment read: “Wishing The Earl of Wessex a very happy birthday.

“The Queen has been pleased to grant The Earl of Wessex the additional title of Earl of Forfar.

“Their Royal Highnesses will use the title The Earl and Countess of Forfar when in Scotland.”

This is unlikely to be the last royal title Prince Edward receives.

Prince Edward was not made a Duke because reportedly according to official sources, when Prince Philip dies, Edward will be given the Dukedom of Edinburgh.

Due to the laws of succession, the title will be returned to the crown upon Prince Philip’s death and then can be given out once again by the monarch.

Technically due to the lines of succession, the title would by default pass to Prince Charles, but it is likely this title would be given to Edward as a courtesy.