Activists campaigning against the HS2 rail line have accused police of heavy-handedness after an officer appeared to repeatedly punch a protester who had already been restrained.

Video footage shows the unnamed 26-year-old man, part of a small group who had been driving to a demonstration near Aylesbury, Buckinghamshire, lying face down on the ground with three officers on top of him on Friday.

After an initial struggle he appears to lie still for some time. An officer kneeling on the protester’s leg then strikes his midriff three times, while a female activist cries out: ‘Oh my god, oh my god! He’s punching him!’

The activists claim they were unfairly arrested for obstructing a highway simply because their minibus stalled, and had not taken part in any disruptive actions or behaved threateningly.

Larch Maxey, a 47-year-old former university lecturer who gave up his job to volunteer full-time for HS2 Rebellion and Extinction Rebellion, said: ‘We’d been told some activists had got on top of a crane which was being transported for HS2 works.

‘We found ourselves driving along Blackgrove Road and the crane was coming towards us with a police escort.

‘The police instructed us to turn around, which we did, but we stalled. They jumped in, took the keys and told everyone to get off the bus, so we did.

He said the 26-year-old initially tried to keep his distance from the police but was arrested and immediately pinned down, adding: ‘I think they assumed he was going to jump on the crane.’

‘He was complying completely. He had no choice but to comply – he was lying face down.’

Vowing to lodge a complaint, Dr Maxey continued: ‘Another pair of officers were obstructing me from getting any nearer, so I couldn’t get his badge number.

‘They dismissed the punching as ‘distraction strikes’ although I could see they were not looking at it.’

All charges against the young man were subsequently dropped.

The incident is the latest in a string of violent confrontations between protesters, police and HS2 bailiffs in recent months, coming just days after a contractor was filmed kneeling for up to four minutes on the neck of an activist who had been ‘catapulting carrots’ onto a construction site.

In October, William Harewood, the only black activist in a group in Wendover, also near Aylesbury, had his neck and back knelt on by a police officer after being thrown to the ground, claiming he was singled out for arrest due to his racial background.

Earlier that month Metro.co.uk revealed four HS2-contracted enforcers had been suspended and placed under police investigation after allegedly breaking an activist’s jaw while off-duty.

The activists stopped on Friday say they were part of the same Covid support bubble and none have been charged with breaching coronavirus regulations.

Explaining their reasons for heading to support the ‘truck-surfers’ who boarded the crane, Dr Maxey added: ‘Every aspect of HS2 is now being targeted with civil disobedience because the whole scheme needs to be stopped with a matter of urgency.

‘This destructive and expensive scheme needs direct action against it at every step.’

A spokesperson for Thames Valley Police said: ‘Officers were striving to balance the rights of the public to protest and demonstrate peacefully, alongside the rights of HS2 Ltd to conduct lawful business activity.

‘The footage provided shows officers using force in order to make an arrest of an individual who was non-compliant.

‘Officers are trained to be proportionate in using force to make arrests and may do so in situations where individuals are failing to comply when being arrested.

‘Public safety is and remains a policing priority for Thames Valley Police in dealing with the impact of HS2 construction works and related activity and protests against HS2.’

Two men aged 32 have been charged with wilful obstruction of a highway and will appear in court next month.

Police confirmed two other men were arrested at the time, one of whom was de-arrested at the scene and the other released later with no further action. 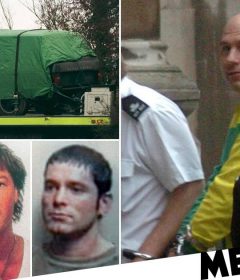 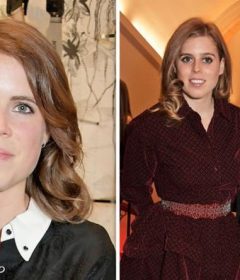 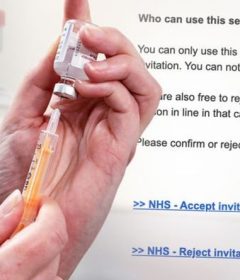