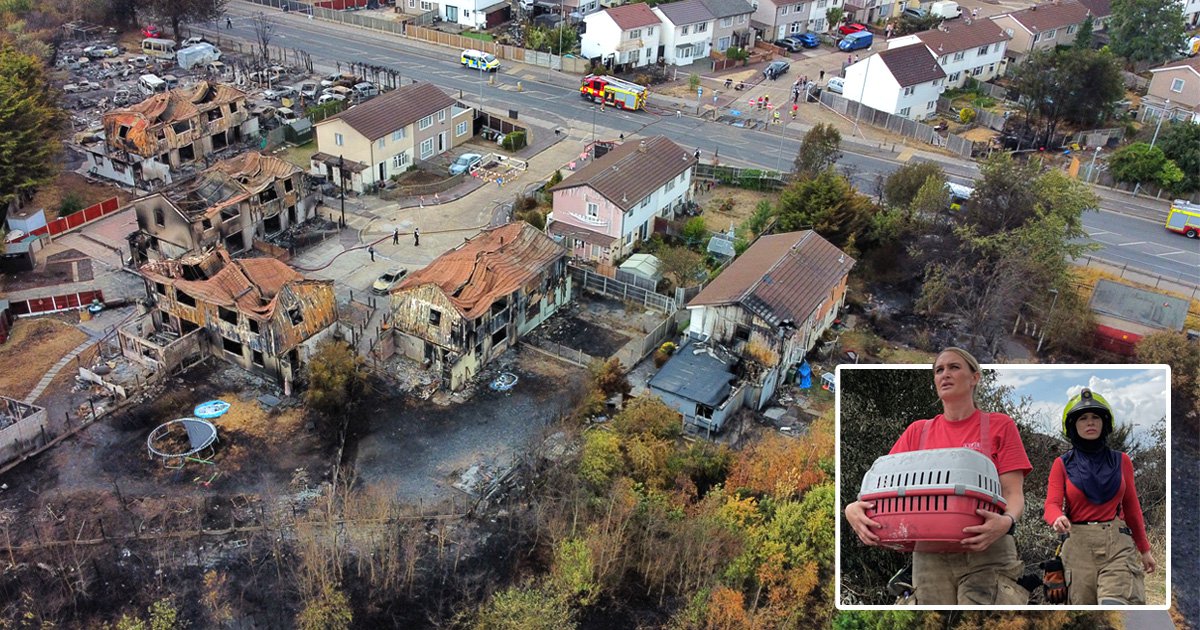 An area of east London has been left unrecognisable after a wildfire engulfed homes, destroyed vehicles, and left people fleeing for their lives.

Firefighters fought for more than eight hours to bring the blaze in Dagenham under control yesterday as temperatures across the capital reached record-breaking highs.

More than 24 hours after the fire took hold, the streets surrounding Beam Parklands look more like a post-apocalyptic film set than an east London suburb.

Aerial images show how the homes nearest the park where the fire broke out were most vulnerable to the blaze.

Once green lawns and open spaces are scorched black and gardens have been reduced to charcoal.

One image shows the frame of a trampoline left behind, while everything around it is blackened and torched.

Firefighters remained on the scene overnight and were back today, checking on hotspots, and picking their way through the wreckage of buildings to reunite lost pets with their owners.

They were seen carrying animals saved from the scenes of devastation to safety in pet carriers.

In one of the worst affected cul-de-sacs, photos reveal how the houses look like they melted in the heat, with roofs collapsing in on themselves.

Some buildings were still smoldering while others have completely gutted by the fire, which tore through almost everything in its path.

Where a car workshop once stood, were just the burnt-out shells of numerous vehicles.

London Fire Brigade (LFB) was initially called to the blaze in Beam Parklands at 2.15pm yesterday.

More than 100 firefighters from 15 crews including teams from Whitechapel, Leytonstone, Millwall, and Clapham were sent to the scene, managing to get the blaze under control by 10.40pm.

Two people had to be taken to hospital suffering from smoke inhalation but fortunately, no one was killed in the fire.

Fourteen homes and 25 vehicles were completely destroyed in the blaze, while more were severely damaged.

More than 130 people had to be evacuated from the area with some unable to return to their homes and having to be placed in temporary accommodation.