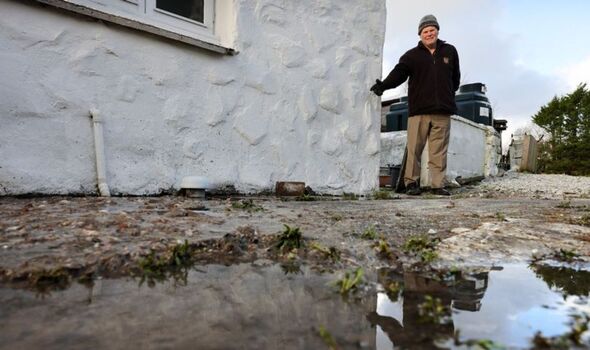 A pensioner has been left with human waste floating outside his property and fears it will soon infiltrate his home.

He claims the neighbourhood’s sewage pipes are too old and can no longer cope when it rains.

Paul Nesbitt has lived in Stithians, Cornwall, for the past six years, but it seems the sewage network from South West Water has finally packed up, leaving raw sewage flowing along the footpath by the side of his home on Foundry Road.

When CornwallLive visited the 73-year-old, the drain cover in the middle of the road was bubbling away with human faeces as the pipe below failed to handle the volume of sewage and rain.

The waste flows onto the road and straight into a nearby stream.

Paul said: “We’ve had 11 tankers come to the village to try and sort out the drains in two weeks.

“They came to clear the sewage pipe in the middle of the road but it’s not working.

“My issue is that there is raw sewage floating outside my drive because the pipes are too small to take it all when it rains heavily.

“The risk is that it will start backing up into my house or going into my yard.”

He added: “South West Water can pressure wash it down all they want, it doesn’t solve the problem.”

The retired construction worker said sewage has been floating outside his house for two weeks days but the issue has not been solved.

He said: “I called them again about on Sunday (January 15) and they said this was a priority call and they’d be out within four hours but they never turned up.

“That pipe below the path is four inches wide. It’s no longer coping.

“It needs to be dug up and replaced with a bigger one or the problem will continue and all South West Water will do is pressure wash sewage off the road again and again.”

A spokesperson for South West Water said: “We are aware of an issue with overflowing manhole covers in Foundry Hill, which was reported to us last week.

“This has been caused by heavy localised rainfall, which at times, is overloading the network.

“Our teams have been working hard on site, using tankers to divert flows away from the area and carrying out a thorough clean-up.

“Tankering will continue as a temporary measure.

“We are investigating potential sources of groundwater infiltration in the area and have investment planned in the catchment to increase network capacity to reduce the risk of this happening again.”