A paedophile who offered to pay another man £200 if he could rape his nine-year-old daughter has been jailed.

Christopher Rodgers, of Huyton, was speaking to a man he didn’t realise was an undercover police officer on a Kik Messenger chatroom.

Liverpool Crown Court jailed the Rodgers, 38, for four-and-a-half years and ordered he be added to the Sex Offenders Register.

In August last year the police officer, who used the code name ‘Andy’, started a private chat with Rodgers, who said he did not have any experience with any real girls and asked whether Andy had access to one.

When the officer answered that he lived in London with his nine-year-old daughter, the paedophile asked if he ‘charged her out’ and if she had any sexual experience.

Rodgers sent Andy a video of a 12-year-old girl being raped by a grown man, a Category A – the most serious child pornography offence.

He asked for a photo of Andy’s daughter in case he ‘didn’t find her attractive’ and discussed meeting for the rape to take place.

Rodgers said he would drive ‘halfway’ to London and asked whether he would be alone with the child.

The next day Rodgers confirmed he still wanted to see the girl but ‘unless he saw an image of her it would be a waste of time’ in case he ‘didn’t find her attractive’.

They found 46 Category A, 30 Category B and 28 Category C indecent photos and videos of children as well as two bestiality images.

Before Andy contacted Rodgers on the 49-member group he had shared two non-indecent images of two young girls and claimed he had spoken to them online the night before.

Members of the group told him they were ‘too young’ and threatened to kick him out. He had also posted a video of a naked girl, aged between 10 and 11, falling into Category C.

When police searched his house they found that he had also shared Category A files showing children being raped in a different Kik group to someone with the username ‘Creepy Guy’.

After his arrest Rodgers answered ‘no comment’ to most questions when he was interviewed but insisted he did not have a sexual interest in children and said there would not be any inappropriate chats with children found on his devices.

Prosecutor Natalia Cornwall said Rodgers previously claimed he was carrying out his own investigation into online paedophiles but ‘didn’t want to talk about it further’.

He was interviewed again in August but again answered ‘no comment’.

Paul Lewis, defending, said Rodgers was effectively of previous good character and asked for credit for his guilty pleas and claimed he was ‘vulnerable’.

He said: ‘This is a difficult time for a defendant to remove himself from family and place himself at risk of custody.’

Mr Lewis said that the details of his vulnerabilities were recorded in his ‘pre-sentence’ report and would not be set out again ‘to save him from further embarrassment’.

Judge Thomas Teague, QC, said Rodgers expressed interest in sexual activity with a nine-year-old girl and indicated he would pay £200 for this and ‘persisted’ until the officer ended their exchange.

He said: ‘To put it bluntly, you made it clear that you wished to rape her, both vaginally and orally.’

The judge said Rodgers said the report outlined his ‘psychological vulnerability’, including an ‘adjustment disorder’, but he did not appear to suffer from any mental illness.

Judge Teague said there had to be a significant reduction in the sentence because the girl didn’t exist and because Rodgers did not finalise an arrangement with the officer but said he ‘came very close’.

Rodgers’ wife sitting in the public gallery broke down in tears and sobbed as her husband was sent down. 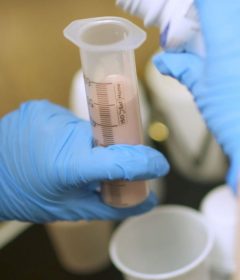