Home » Europe » No way! Boris told in NO uncertain terms what to sacrifice to Brussels – POLL

No way! Boris told in NO uncertain terms what to sacrifice to Brussels – POLL

German leader Angela Merkel has warned Britain would have to “live with the consequences” of a no deal Brexit as talks resumed today. But our exclusive online survey revealed very few Brexit supporters would consider giving up a key component of UK sovereignty to secure a trade deal.

We shouldn’t sacrifice a thing, we just want to be treated like any other SOVEREIGN trading nation!

A massive 91 percent (2,027 people) said they would be willing to sacrifice nothing at all to strike a deal with the EU, according to the poll.

A total of 2,293 readers took part in the exclusive online poll which ran from midnight last night until 8am today.

One reader commented: “We shouldn’t sacrifice a thing, we just want to be treated like any other SOVEREIGN trading nation! We don’t have to give anything away.” 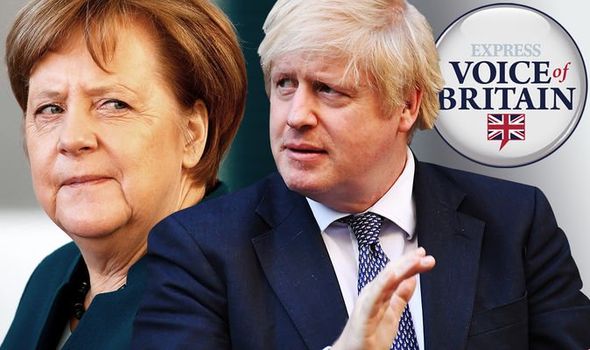 Another said: “I would not give the EU last years newspapers, the way they have treated us is a disgrace with all their demands and threats.”

Another reader said: “The fact that the EU still want to control us shows us that they have no respect for us.

“That’s enough. Give ’em a Harvey Smith and WTO now.”

And another commented: “I’m willing to sacrifice Blair, Hammond and the rest of the Remainers.” 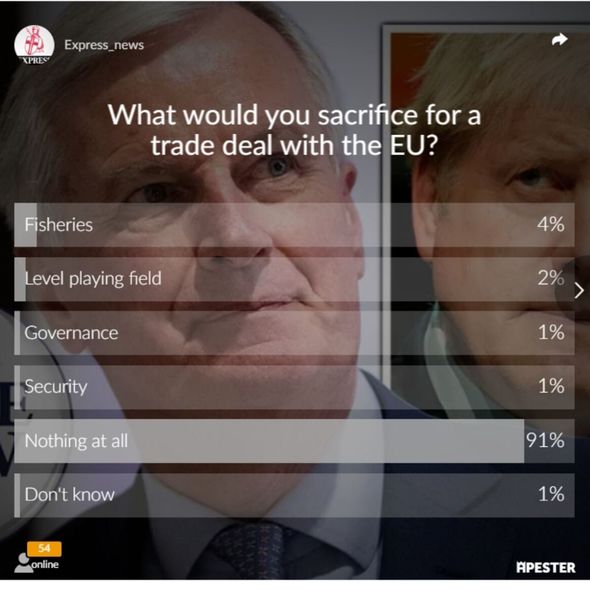 The poll results come after Downing Street said Mr Johnson had once again stressed the UK was prepared to leave on “Australia terms” if no agreement was forthcoming.

Australia has no bespoke trade deal with the European Union, leading Brexit critics to describe the proposals as akin to leaving on no deal terms with a number of mini-deals in place to allow vital sectors, such as air travel, to continue.

A Number 10 spokeswoman said: “On the UK’s future relationship with the EU, the Prime Minister welcomed the agreement on both sides to an intensified process of negotiations in July.

“He said the UK would negotiate constructively but equally would be ready to leave the transition period on Australia terms if agreement could not be reached.” 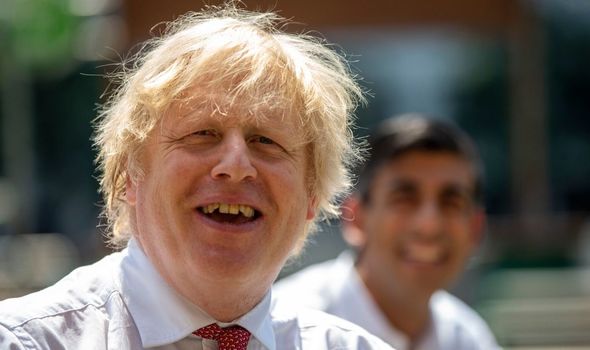 The remarks come after German leader Ms Merkel warned that Britons would have to “live with the consequences” of Mr Johnson rejecting predecessor Theresa May’s plan to continue close economic links with Brussels after Brexit.

Ms Merkel spoke with six European newspapers ahead of Germany assuming the rotating presidency of the EU council on July 1, and a day after Mr Johnson’s senior Brexit adviser signalled the next phase of talks with the bloc would be tough.

Negotiations are still deadlocked after months of virtual talks with fishing rights and EU calls for a so-called “level playing field” proving to be major stumbling blocks.

Mrs Merkel said: “With Prime Minister Boris Johnson, the British Government wants to define for itself what relationship it will have with us after the country leaves.

“It will then have to live with the consequences, of course, that is to say with a less closely interconnected economy.

“If Britain does not want to have rules on the environment and the labour market or social standards that compare with those of the EU, our relations will be less close.”

She said Europe could only respond appropriately to “reality” as Britain sets out what it wants at the negotiation table. 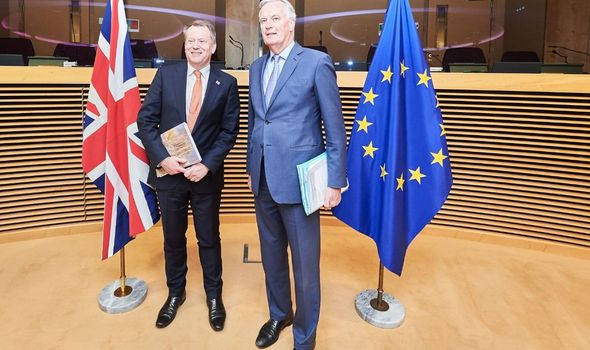 Mrs Merkel’s comments come as the PM’s Brexit adviser David Frost said the “intensified process” in discussions next week needed to be realistic.

Mr Frost said the UK would not allow Brussels the right to hit back at changes in British law with tariffs.

In bullish language, Mr Frost insisted UK sovereignty over laws, courts, and fishing waters was “not up for discussion”.

He also said that what he called some of the EU’s more “unrealistic positions” would have to change in order to achieve progress.