New guidelines to make small batteries safer, including through packaging and casing, have been issued after the death of a three-year-old who accidentally ingested one.

They can become lodged in the oesophagus (food pipe) of youngsters and lead to a chemical reaction which erodes tissue in just two hours, said the Healthcare Safety Investigation Branch (HSIB). 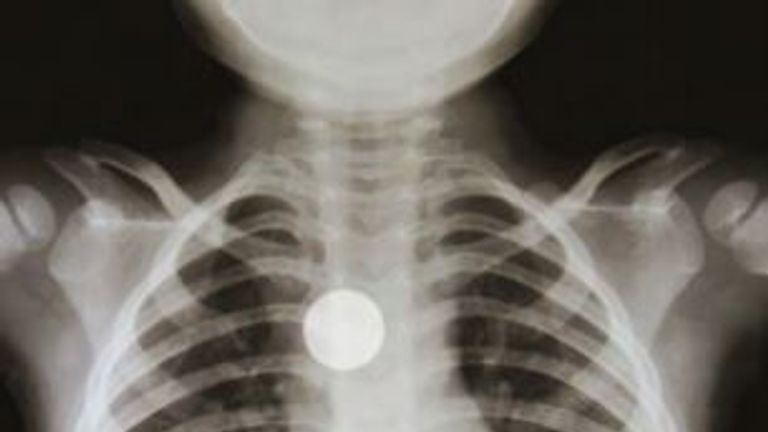 The fresh advice is also for emergency health workers as well as manufacturers.

Paramedics and other health professionals should have support and guidance to spot the signs of a swallowed battery.

And if a child is thought to have ingested one, they should be taken to A&E immediately.

The advice comes after the three-year-old-girl accidentally ingested a 23mm battery in December 2017.

The lithium battery eroded tissue and caused a fistula (abnormal connection) between the oesophagus and the aorta leading to the catastrophic haemorrhage (bleeding).

The safety body warned small children were at higher risk as they tend to put things in their mouths.

And people should be particularly aware of button batteries with a diameter of 20mm or more because they are more likely to get stuck in the throat.

The three-year-old, who had pain in her stomach and chest area after vomiting, had firstly been diagnosed with tonsillitis and prescribed antibiotics.

Then she was given more of those drugs after further visits to the GP and local hospital.

But three days later, following a second call to 999, the child died after she was taken by ambulance to hospital.

HSIB chief investigator Keith Conradi said: “We are not just putting the onus on public safety awareness but also looking at what can be done before products reach homes and what clinical staff need to be aware of to make the right diagnosis.

“As we’ve seen in our reference case, the consequences of a child swallowing a button/coin cell battery can be devastating.

“We’ve worked closely with national organisations to ensure our safety recommendations help prevent this happening to other families.”

He said: “These batteries are increasingly being used in many household essentials making everyday life more convenient.

“However, as they are more powerful than alternatives, it is important that consumers have the right information and advice to be able to keep their children safe.”

Coronavirus POLL: Should Brexit be delayed due to coronavirus outbreak? VOTE HERE