Home » Europe » ‘My Conscience Is Clean. And Yet They Came for Me.’

‘My Conscience Is Clean. And Yet They Came for Me.’

“That’s our profession,” the lawyer famed for taking on Russian spies wrote on Facebook.

Two days later came an early morning knock on his Moscow hotel room door, and Mr. Pavlov realized he should have been more worried.

For a quarter century, Mr. Pavlov defended scientists, journalists and others swept into the maw of what he calls Russia’s “leviathan” — the security state descended from the Soviet K.G.B. Crusading against state secrecy, Mr. Pavlov turned his legal battles into spectacles. Appealing to public opinion, he sometimes helped his clients avert the worst.

Now the leviathan threatens to swallow Mr. Pavlov. In April he took on one of his most explosive cases yet: the accusation of extremism against the organizations led by the jailed opposition leader, Aleksei A. Navalny. Within days, Mr. Pavlov was arrested. Now, he himself has become a symbol of the Russian state’s ever-wider crackdown on dissent.

It was one thing to defend clients from the arbitrary power of the state; it has been quite another, Mr. Pavlov has discovered, to feel it deployed against himself. The story of Mr. Pavlov — one of Russia’s best-known lawyers and freedom of information activists — is a story of how quickly modern Russia has changed.

“I feel this injustice, this terrible injustice,” Mr. Pavlov said in an interview this week, still seeming shaken by how swiftly his fortunes had shifted. “My conscience is clean. And yet they came for me.”

Mr. Pavlov, 50, spoke at his country house on northwest Russia’s rugged Baltic coast, outside St. Petersburg. His wife, Yekaterina, has been reading Facebook posts and Telegram messages aloud to him. Mr. Pavlov was released from custody pending trial, but he is not allowed to use the internet, talk on the phone or receive mail.

In the lush summer woods and on the slim sandy beach, where you can see Finland in the distance, he at least feels somewhat liberated from the surveillance goons who dog him in the city. 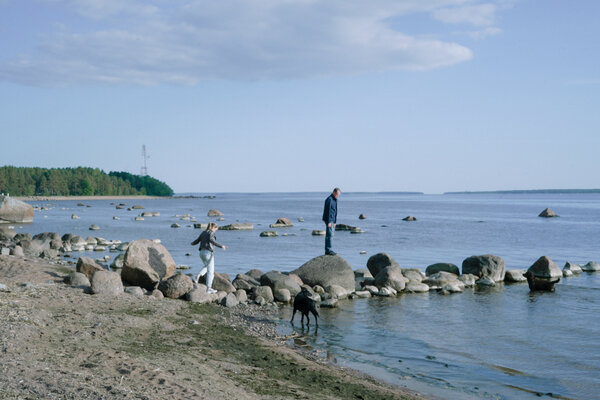 And he has a bit more time to reflect on a career that traces the arc of President Vladimir V. Putin’s rule. Mr. Pavlov comes from a military family, and had figured on a Red Army career himself until a basketball injury in 1987 derailed those plans. Instead, he studied programming, then went to law school in St. Petersburg after the Soviet Union’s collapse.

Just a decade ago — during a period Mr. Pavlov calls “peacetime” — his advocacy for transparency was being heard by the Russian government. The Kremlin agreed to adopt freedom of information laws and disclosure rules for officials that were liberal even by Western standards.

But as the reformers in government lost power, and Mr. Putin started his third presidential term in 2012 suspecting the West was plotting to unseat him, Mr. Pavlov became regarded first as an adversary — and then, he believes, as an enemy.

His pro-transparency activism and his work as a defense attorney increasingly melded into one. He took on the cases of people accused of treason and other national security crimes and tried to cut through the secrecy that the authorities imposed on their trials. His work showed how Russians have learned to find pockets of freedom and pressure points on the authorities within an authoritarian system.

To some, the notion of fighting for justice in Russia’s notoriously politicized courts can seem ridiculous. Mr. Pavlov is not among them. “There is no such thing as a hopeless case,” he said, quoting one of his early mentors.

“We don’t have other courts,” he added, conceding that the best his clients can typically hope for is a prison sentence reduced to a few years. “We can’t just abandon people who have been caught in the leviathan’s jaws.”

Clever legal briefs do not get a lawyer very far in Russia. But clever publicity campaigns, in a country where the internet remains mostly uncensored, can.

In 2016, for instance, Mr. Pavlov told reporters about a client in southern Russia recently sentenced to seven years in prison for treason. Her crime? She had messaged a friend in nearby Georgia remarking on a passing Russian military convoy in 2008, months before Russia went to war with the country.

A journalist asked Mr. Putin about the case at his annual news conference; faced with a patently absurd conviction, Mr. Putin pardoned the woman, Oksana Sevastidi, a few months later. The lesson for Mr. Pavlov was that making the authorities look petty and incompetent was his most effective strategy.

Earnest indignation, on the other hand, can be counterproductive.

“This leviathan always wants to look very serious and brutal,” Mr. Pavlov said. “The more you condemn Russia for violating human rights or fundamental norms and so on, the more Russia responds, ‘Yup, that’s us.’”

Mr. Pavlov heads a group of lawyers and activists called Team 29 that produces podcasts and YouTube videos about its cases, along with advice columns on questions like, “How many times can you go to a protest march without going to prison?”

Mr. Pavlov and his Team 29 colleagues’ clients include the niece of the Holocaust hero Raoul Wallenberg, who is seeking access to K.G.B. documents that could shed light on his mysterious death in the Soviet Union, and several Russian scientists whose contacts with foreign colleagues are being investigated by Russian counterintelligence agents.

In the process, Mr. Pavlov has emerged as one of the most prominent adversaries of Russia’s powerful domestic intelligence agency, the Federal Security Service, or F.S.B. The agency has led the recent crackdown on the opposition, analysts say, and tried to assassinate Mr. Navalny last year. (The Kremlin denies that the authorities had any role in Mr. Navalny’s poisoning, or that there is an organized campaign against the opposition.)

Mr. Pavlov tries to understand the worldview and the motivations of the F.S.B., which Mr. Putin headed in the 1990s. Barred by law from traveling abroad, he notes, its officers see any contact between Russians and foreigners as suspect.

“They truly, earnestly believe that they are doing something very important — more important than all of our laws,” Mr. Pavlov said. “They believe they are the people ensuring national security in the country.”

The F.S.B. is also behind his current predicament, Mr. Pavlov says, delivering long-awaited payback. The decision to take on the Navalny case — in which the authorities are seeking to outlaw the opposition leader’s organizations as extremist, potentially exposing thousands of supporters to prosecution — pushed senior officials to act against him, he says.

Officially, Mr. Pavlov is being investigated on suspicion of making public classified information from a treason case against another client, the former journalist Ivan Safronov. The alleged crimes: publishing the F.S.B.’s charging document against Mr. Safronov and telling reporters the pseudonym of a witness against him.

Those details can be made public, Mr. Pavlov insists, because they do not constitute state secrets. The case is thus a test of whether Mr. Pavlov’s anti-secrecy push can survive Russia’s latest wave of repression. And it could determine his professional future: If he is convicted, he faces 480 hours of community service and would lose his ability to practice law.

Mr. Pavlov’s current state of limbo could last for a year or more, he figures. At his house near the coast, he has his giant swing to distract him — he and his wife fashioned it out of a trampoline during the coronavirus lockdown last year — and his dogs, Hard and Easy.

He is heartened by the public “signal” sent to the Kremlin by lawyers, writers and other prominent figures who have signed open letters on his behalf. In the past, such declarations of support would go a long way toward freeing one of his clients. But times may have changed, he fears, with new arrests of journalists, activists and politicians making headlines with numbing frequency in recent months.

“If the authorities hear this signal and open their jaws, then everything will be fine,” Mr. Pavlov said, referring to his own fate.

The danger, he said, is that the public is becoming inured, emboldening the government to act with still more impunity.

“People’s pain threshold has gotten much higher,” he said. “They have become less sensitive to the bad things the state does.”