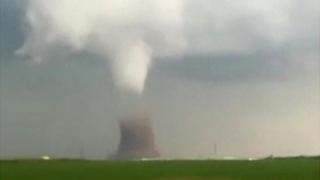 Several people were injured when a tornado barrelled through southern Romania, forcing a bus off the road and overturning it in a nearby field.

Twelve people on the bus were hurt and one passenger was treated for severe trauma, local reports said.

Drivers left their cars near Calarasi to stare at the rare tornado as it swirled through fields, picking up a tower of dust.

The tornado narrowly missed a village but 10 buildings lost their roofs.

The freak weather early on Tuesday evening was a result of a cold front from Bulgaria, to the south, which collided with far warmer, moist air in southern Romania, said meteorologists. The tornado’s speed was estimated at 90km/h (56mph).

“We’re really talking about a great and powerful tornado that has formed as a funnel from top to bottom and bottom to top,” meteorologist Mariana Fratila told Adevarul newspaper.

Drivers posted videos of the tornado on social media as they drove past the swirling funnel of dust.

High winds were reported in parts of Romania on Wednesday and the national meteorological office said it would consider using a mobile alert system to alert people in areas at risk of tornadoes.