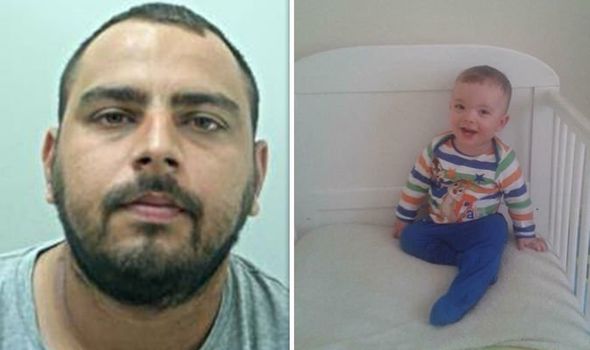 Jordan Monaghan, 30, smothered his baby daughter Ruby as she slept in a Moses basket in the family home and, less than eight months later, killed 21-month-old son Logan in his buggy at a leisure centre. The construction worker was today found guilty of these murders, and that of his ex Evie Adams.

Monaghan poisoned Ms Adams when he was on bail for the murders of his children, Preston Crown Court heard.

He will be sentenced there later today, Lancs Live reports.

The defendant will also be sentenced for attempting to murder another child who was in his care.

Monaghan was not present for today’s verdict.

During his 10-week trial, the court heard he smothered little Ruby in the family home in Blackburn, Lancashire, on New Year’s Day 2013, as her mum Laura Gray, 28, was asleep upstairs.

He then smothered Logan in a changing room at a leisure centre in the town in August of that year.

The day before Logan’s death, Ms Gray had told Monaghan the relationship was over after discovering he owed thousands of pounds in gambling debts.

A post-mortem examination had concluded Ruby died from acute bronchopneumonia while Logan’s cause of death remained “unascertained”.

Neither child’s death could be explained by illness, genetic defect or natural causes.

Monaghan, of Blackburn, killed Ms Adams in October 2019 by giving her a fatal overdose of Tramadol and Diazepam after she had threatened to dump him.

He then faked a suicide note, the jury was told.

Jurors heard he had told her: “I won’t keep putting up with you saying we are over.”

Ruby and Logan’s mother, Ms Gray, could be heard weeping in the public gallery as the verdicts were given.

The defendant denied all the charges.