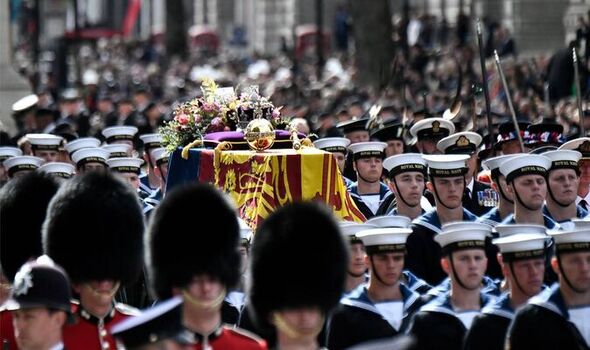 King Charles III followed on foot, accompanied by brothers Princes Andrew and Edward and sister Princess Anne. Behind them was William alongside the Duke of Sussex and cousin Peter Phillips.

Sonia Cove, a 54-year-old secretary from Bedford, said: “It was amazing, the British put on such a show. To see all the military personnel marching in step and to hear the music was really moving.

“The amount of people here since really early this morning just shows how much the Queen was loved. On the television you can watch it but you can’t feel it. Here you feel it.That’s the difference.”

Parliament Square, Whitehall and The Cenotaph, Horse Guards, The Mall and Constitution Hill – all associated with joyous jubilees and weddings, now stood silent as the casket passed by.

At Buckingham Palace the butlers, footmen, housemaids and cooks who had served her came out to pay their last respects, bowing their heads and curtseying.

The King’s Guard turned out in the forecourt to salute the carriage.

Guns were fired in Hyde Park by The King’s Troop, Royal Horse Artillery, as Big Ben tolled throughout the duration of the solemn procession involving more than 4,000 service men and women.

Big Ben chimed 96 times – one for each year of the Queen’s life.

The march was punctuated by applause and three cheers from spectators – each one grateful to have been there to witness the ceremony but shattered to have lost the nation’s guiding light.