Home » Europe » Migrant CHAOS as 1,600 risk their lives to cross Channel in May

Migrant CHAOS as 1,600 risk their lives to cross Channel in May

Border officers say ruthless gangs of people smugglers are exploiting fine weather to entice more migrants into tiny boats for the risky journey. Around 500 migrants were brought in over the final four days of last month alone. The Home Office confirmed that 132 migrants also crossed the Channel in six small boats on Tuesday.

This followed large numbers last week as conditions began to warm and seas were relatively calm.

On Friday, 19 boats carrying 336 people were intercepted by UK authorities, while seven boats carried a further 144 migrants on Saturday.

One vessel with 17 people on board crossed the Channel on Sunday, and a further 71 people travelled in three boats on Monday.

A Home Office spokesman said gangs behind the crossings were “putting profits before people’s lives”.

As the crisis deepens, the Home Office confirmed French authorities had stopped 3,600 people from ­making the journey so far this year.

It also said officials have secured 65 prosecutions related to small boats since the start of the year.

A report by Migrant Watch UK revealed that, as of May 16, 3,107 people had crossed the Channel since January. This is more than double the number over the same period last year – around 1,400.

Home Secretary Priti Patel had pledged to make the crossing “unviable” when plans for an ­overhaul of the asylum-seeker system were published in March.

It was supposed to see illegal ­immigrants returned to safer places such as France and other EU ­countries, but many of these nations are understood to have refused them. 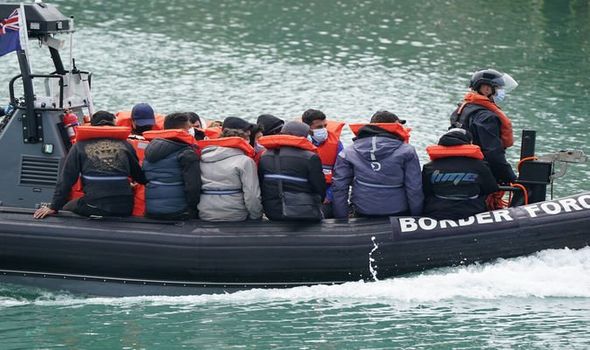 However, officials believe the recent surge in small boat crossings is ­partially due to a decrease in lorry traffic travelling from French ports.

And there are growing fears of unrest at facilities in the UK dealing with arrivals as soon they will become overstretched.

Most of the migrants who arrive in Kent are initially housed at a former army barracks in Folkestone which was set on fire in a riot over ­conditions in January during a
Covid outbreak.

Asylum seekers are free to come and go from the camp, and adults have an initial interview before being sent to accommodation centres across Britain, paid for by UK taxpayers and provided by private contractors.

The migrants are given £37.75 per week for essentials like food, clothes and toiletries while they wait for a decision on their asylum application.

Lucy Moreton, professional officer for the ISU immigration union, said: “Border Force staff are feeling increasingly threatened. There is a risk of unrest from these (arriving) groups. They are not exhausted, beaten down and glad to be here. They know they are going to be moved into accommodation. If that doesn’t happen promptly, they get cross.”