Home » Europe » Merkel and Macron must END THIS! French and Germans opposed to another Brexit delay – poll

Merkel and Macron must END THIS! French and Germans opposed to another Brexit delay – poll

The Johnson government says the UK will leave the bloc as planned on October 31, but a law passed by MPs forces him to seek a delay if he cannot strike a deal by October 19. Fifty-seven percent of French people think the EU should reject a second Brexit delay; compared with 66 percent of Germans, according to the survey by pollster Kantar.

The survey also found that 58 percent of French people don’t want Brussels to renegotiate the withdrawal agreement struck between London and Brussels late last year; compared with 62 percent of Germans.

The poll underlined the dark clouds of uncertainty hanging over Brexit, with the majority of respondents saying there was a high chance Brexit would be delayed again.

Only 46 percent of French people said the UK would leave the bloc at the end of the month, compared with 38 percent of Germans.

A slim majority of French people – 52 percent – would vote to remain in the bloc in the event of a referendum on EU membership, the poll found. Some 24 percent would vote to leave. 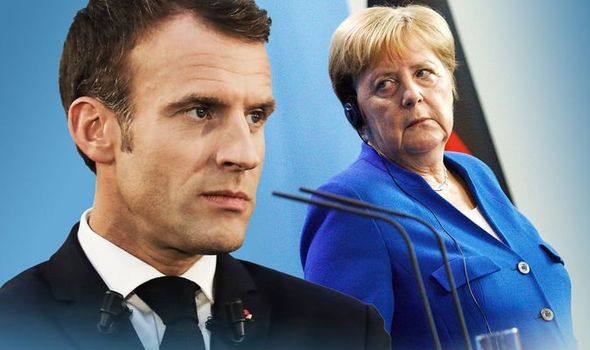 German respondents showed more attachment to their EU citizenship: 75 percent told pollsters they would vote to remain, while 17 percent said they would choose to leave.

With just 22 days before the UK is due to leave the bloc, the future of Brexit remains deeply uncertain as both London and Brussels seek to avoid blame for another delay or a chaotic, no-deal Brexit.

Prime Minister Boris Johnson has vowed to deliver Brexit on October 31 no matter what, and unabashedly dismissed a law passed by parliament that forces him to write a letter to the EU asking for a delay if he cannot strike an amended deal by October 19.

But Brexit talks between the UK and the EU came close to collapse on Tuesday, with both sides accusing the other of inflexibility and sabotage.

In a sign that Mr Johnson’s ‘take it or leave it’ proposals to break the Brexit deadlock have failed, a Downing Street source said he and German Chancellor Angela Merkel had a frank exchange on Tuesday morning and that she had told him that a deal was now “overwhelmingly unlikely”.

The source said that Mrs Merkel had asked for a rewrite of Britain’s position on the contentious Irish border problem that made a compromise “essentially impossible”.

Finding a way to maintain the sensitive border open without keeping at least a part of the UK tied to EU trade rules has proved to be the biggest stumbling block in Brexit talks.

Mr Johnson attempted to solve the dilemma over the border last week by proposing an all-island regulatory zone to cover all goods. This would replace the so-called “backstop” provision he says must be scrapped from any deal.

He wants Northern Ireland to leave the EU’s customs area along with the rest of the UK and for the province’s institutions to be able to opt to pull out of the regulatory zone – a red line for Ireland and the EU.

Downing Street’s comments about the phone call between the prime minister and Mrs Merkel sparked outrage among EU officials, who accused the Johnson government of playing a “stupid blame game”.

He continued: “At stake is the future of Europe and the UK as well as the security and interests of our people. You don’t want a deal, you don’t want an extension,

you don’t want to revoke, quo vadis [where are you going]?”

However, a Downing Street spokesman said that Mr Johnson didn’t want the UK to crash out of the bloc without a deal, insisting that his Irish border proposals respected both the Good Friday peace agreement and the EU’s single market.

The Kantar poll was carried out late September in Spain, France, Germany, Ireland, Poland and the Netherlands. Around 1,000 people were interviewed in each EU state.